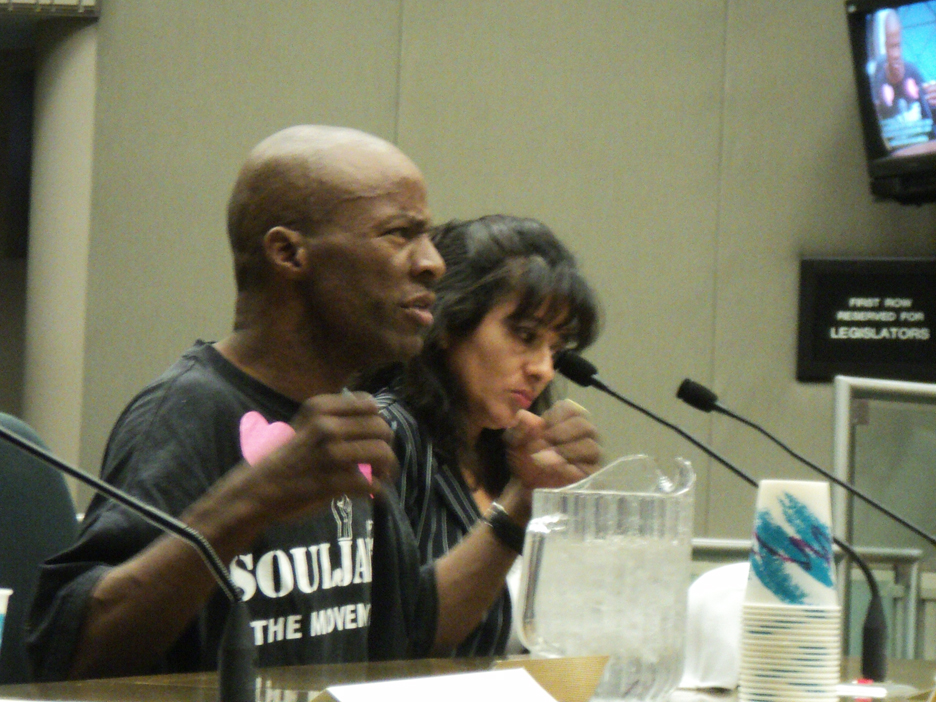 Denise, Marilyn, Anna and I, with Harriett at the wheel, left West Oakland BART in the second carpool wave for Sacramento Tuesday, Aug. 23, at 9:30 a.m. to attend a pre-rally for the historic California Assembly Hearing on Solitary Confinement. Linda Evans was hosting the program when we arrived that muggy warm morning just in time to hear state Assemblyman Tom Ammiano, chair of the Public Safety Committee of the California State Assembly, speak about the reason for a hearing to discuss the conditions in California’s Secure Housing Units (SHU). He said the legislators were all very curious. “This is an issue that gives Assembly people pause, (as) it is so politicized, but we have been able to tap into that compassionate part of people. They know that something needs to be done. They don’t necessarily want to be the ones who do it, but we will make sure that it happens.”

This legislative curiosity theme was affirmed by many All of Us or None members who’d lobbied legislators earlier that morning (the 7:30 a.m. BART carpool shift). One friend, Brother Fred Abdullah spoke of how clueless and uninformed about the situation most if not all of the four politicians he met with that morning were. Later on, the two rows directly in front of the panelists were filled with unidentified men and women, all members of the California legislative team or CDCR staff. I watched their shifting body language – arms folded across chests, legs crossed. Boredom was not evident even in the face of such physical indicators of denial.

State Capitol Room 4202 was full from the balcony to the main floor – it was good the California Department of Corrections and Rehabilitation panel (CDCR) presented last. They would have been laughed out the room – their presentation so absent of any real data, especially when it came to the sentencing standards for prisoners sent to secure housing units or SHUs. From the first panel with a former SHU inmate, Earl Fears, SOULJAHs, The Movement, a family member of an inmate at Pelican Bay, Glenda Rojas, and an articulate clergyman, Rev. William McGarvey, Bay Area Religious Campaign Against Torture, to the panel of experts presenting research perspectives on SHU, the lobbyists against SHU confinement presented irrefutable arguments. I called them the A-Team. 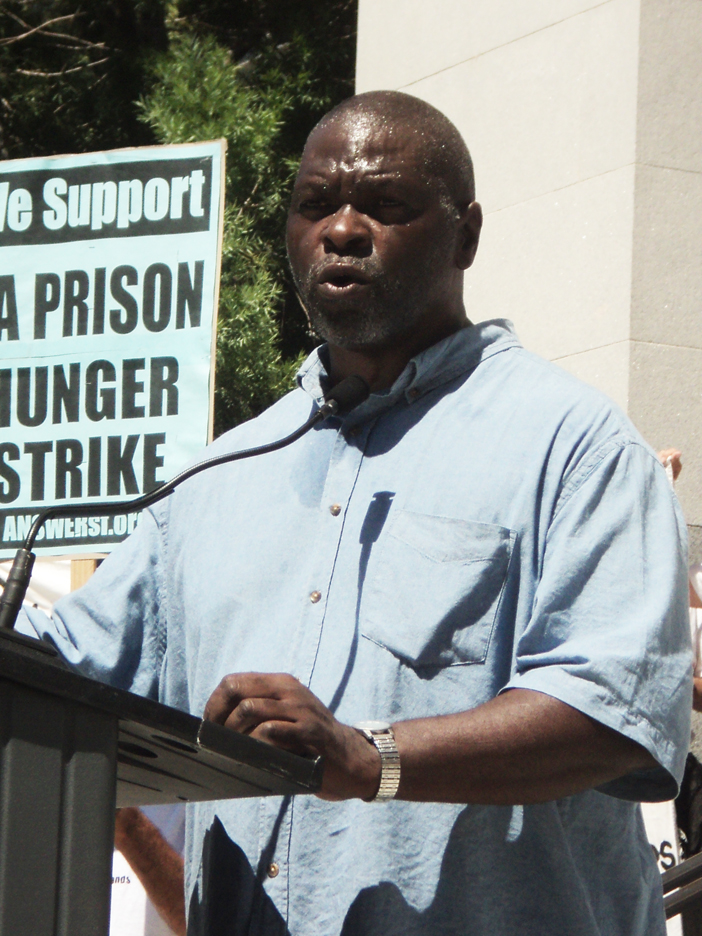 Fears eloquently shared horror stories of his incarceration at Corcoran SHU. There is prison and then there is prison, the SHU its own island within a horrific system of confinement. He said that any time grown men, hard and tough men would break down and cry, the terror had to be real. Rev. McGarvey gave a history of the introduction of solitary confinement, a Quaker practice, into corrections, a practice later suspended for 20 years because of its potential for abuse, then reinstituted. McGarvey echoed Fears examples that spoke to the brutality of California’s penal system, and spoke of the time when prisoners began to be given human rights.

The second panel shifted the narrative to an analysis of CDCR policy of solitary confinement and sensory deprivation with opening comments by Charles Carbone, J.D., prisoner rights attorney. Carbone spoke about the whole gang culture paranoia which seems to define CDCR policies, especially at Pelican Bay. He showed how having the high maintenance population in the SHU didn’t decrease crime or make the prison any safer. In fact, the opposite was true. Sensory deprived, the fact that these men were willing to sacrifice their lives for an opportunity to break the silence and expose the conditions of their confinement, a sentence not based on a verdict by a jury of their peers, rather on the word of a bureaucrat at Pelican Bay on the word of someone forced to debrief or snitch for favors. The accused could find himself plucked from circulation 8-10-22-32 years – the sentence indeterminate which could mean life.

Former SHU inmates speaking at the rally earlier that morning shared how they were recovering from solitary confinement, PTSD and other psychoses associated with such treatment, how they needed continual psychiatric help post-SHU, how the SHU permanently affected their ability to function in society. 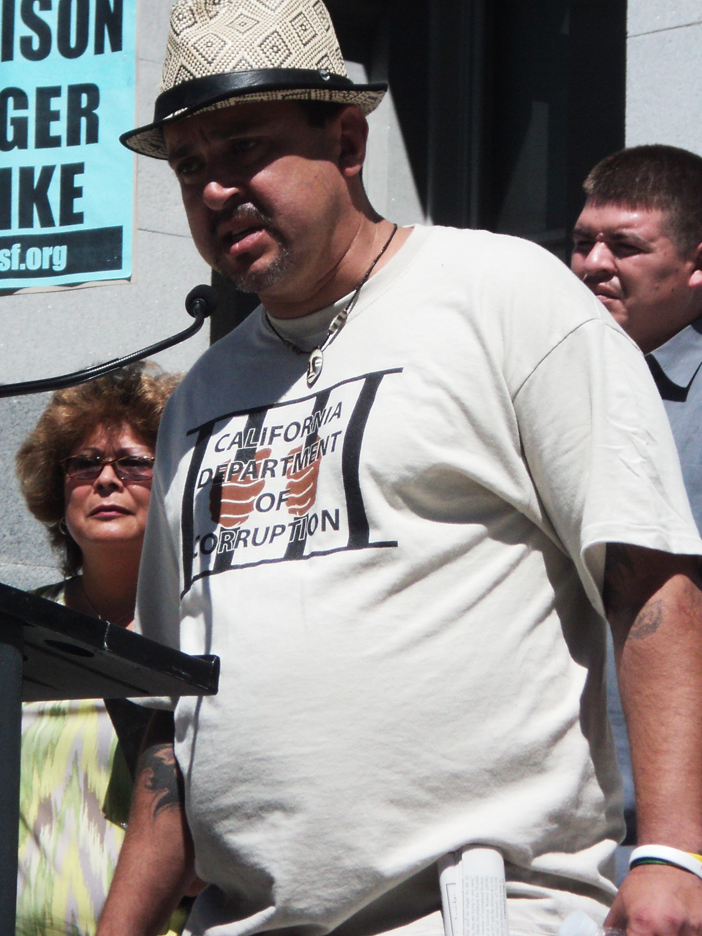 Laura Magnani, regional director of the American Friends Service Committee, shared a report, “Buried Alive: Long-Term Isolation in California’s Youth and Adult Prisons,” which she authored, that addresses the confinement of women and how solitary confinement stretches an already precarious and potentially sexually exploitative situation for women in isolation. She also defined torture and gave numerous statutes that pertained to human dignity and human rights. Dr. Terry Kupers, M.D., MSP, the Wright Institute and Craig Handy, professor of psychology at U.C. Santa Cruz, talked about the effects of long term confinement on inmates. All panelists gave concrete and useful suggestions to the Public Safety Committee, Assemblymembers Holly J. Mitchell, Nancy Skinner, Curt Hagman and vice chair Steve Knight present, with two absences, Jerry Hill and Gilbert Cedillo, on how to make Pelican Bay into an environment that promoted rehabilitation. It got kind of testy at times, especially when CDCR presented. One could see where the assembly’s sentiments lay.

SHU inmates cannot have colored pencils or hobby crafts, photos or contact visits. One woman spoke of how her niece would like a photo of her dad. Mothers spoke of the prison’s refusal to allow their visits. One mother hasn’t seen her son in six years. Another mother said her grandson hasn’t seen his father since he was two, he is now thirteen. One man cried as he recalled the torture he was subjected to in the SHU. Holding his daughter he spoke of the arbitrary nature of the abuse which for him continued when he was released in the form of police harassment.

Dorsey Nunn, executive director of Legal Services for Prisoners with Children and All of Us or None, spoke of his first visit to Pelican Bay. Tuesday, Aug. 23, was his wedding anniversary and he’d planned to go to the cemetery and reflect. He told the story of JT, who has been in the SHU since 1988. The man is losing his color – melanin is not magic. JT has been eligible for parole for 35 years. It’s these men, the leaders, who are targeted by administration, the ones who write the 602s, prepare writs and call into account their captors. 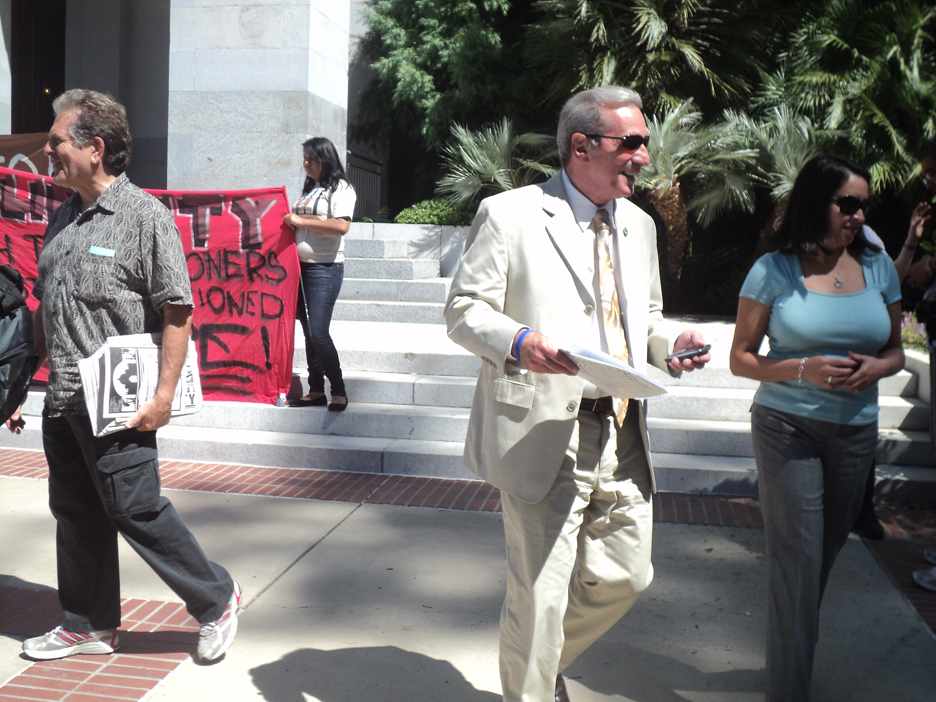 The final panel of two was CDCR. Of the five demands, none were addressed. It would have been so easy to say – SHU inmates can have photos taken for family members; SHU inmates will be allowed access to an open yard where they can see the sky – that the debriefing or snitching prereq for release is eliminated. Not a chance. None of the demands were met, articulated or addressed by CDC reps Scott Kernan, undersecretary of operations, or Anthony Chaus, chief of correctional safety.

It was the uninterrupted procession of voices from the audience: children, parents, friends and advocates that eloquently closed the day. One woman spoke of how CDCR denied her brother from donating his kidney to his sister, a match, and she subsequently died. One man was promised a phone call and then at the last minute stipulations were made – he had to debrief. Two women, one an attorney, were able to share first hand stories and relay messages from the men, whom they’d seen just a week ago. One of the requests was for better more nutritious food from vendors, tapes for mental health, proctors for educational exams, and a larger property allowance – now the men can only have one shoebox full of personal belongings.

I wished I’d been able to get over to the Crocker Museum to unwind, reflect and process the experience. As it is, I sat in a TJ parking lot, writing under a street lamp, my car light shorted out.

The CDC tacks on the R – when the idea of rehabilitation in an environment structured to inspire fear is ridiculous. The questions Assemblywoman Holly Mitchell raised about the arbitrary nature of CDCR policies as relates to SHU inmates were on point and showed how out of control this California department is. That the head of CDCR, Secretary Matthew Cade could not appear at this important and unprecedented hearing was a further slap in the face of this process and an indictment as to how far Assemblyman Tom Ammiano and other elected officials will have to go to address this injustice. At the rally when I spoke to the Assemblyman he said he was determined to host other such conversations, like one already on the death penalty. He said, he didn’t think there were two sides and that he wanted to shine some light on the subject and get people to start discussing this issue and coming up with remedies that (legislators) could push forward. He said he didn’t “want to be stonewalled too much – I understand things move a little slowly but I don’t want to be put off, so I plan to have other hearings, report back hearings (addressing) any commitment to change from the CDCR. We are looking at this (Hearing) as the very first step.”

Ammiano legislative policy supporters Skinner and Mitchell and Hagman gave strong comments and asked tough questions of Scott Kernan. We hope this hearing touched, as the chair said, the compassionate side of people in the room with the hope that change is not up to CDCR (smile). We also hope the next hearing is at Pelican Bay in Crescent City. To stay abreast of Pelican Bay news, check out: http://prisonerhungerstrikesolidarity.wordpress.com and www.sfbayview.com and also check out several special shows on Wanda’s Picks radio featuring Dorsey Nunn along with a mother, Dolores Canales, whose son is in the SHU, Elder Freeman, Manuel La Fontaine, Linda Evans and Deirdre Wilson. Linda was the emcee at the rally Aug. 23. Another recent interview is with LSPC attorney Carol Strickman: www.wandaspicks.asmnetwork.org.