Meet Rev. Edward and Dorothy Pinkney on Friday, Sept. 30, 7 p.m., at ArtInternationale, 963 Pacific Ave. between Powell and Mason, San Francisco – Other stops on the Pinkneys’ Justice Tour are

Read the latest report by Rev. Pinkney below 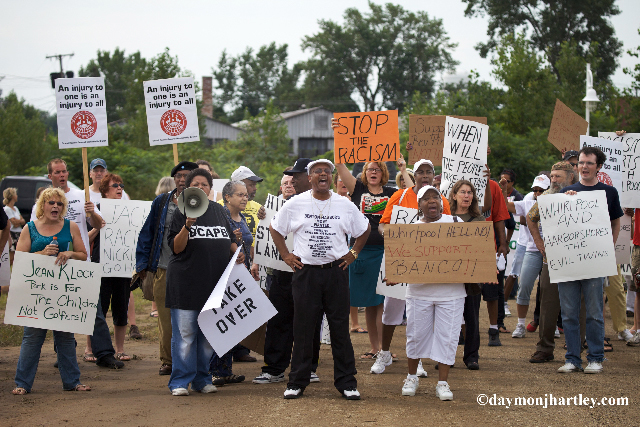 Rev. and Dorothy Pinkney have been leaders in the fight against the corporate (Whirlpool) and state government’s direct takeover of the poor, largely African-American Rust Belt town of Benton Harbor, Michigan, the first American city to be placed under Michigan’s draconian new Emergency Financial Manager law. Rev Pinkney has been jailed for leading the fight-back and for quoting the Bible at a hearing condemming this “economic martial law.”

The Pinkneys’ story is instructive for us here in San Francisco and California, where budgets are “balanced” on the backs of the most vulnerable workers and the poor, criminalizing, removing and driving us further into poverty. Join the Pinkneys and

for poetry, music and hiphop on Friday, Sept. 30, at ArtInternationale, 963 Pacific Ave. between Powell and Mason, San Francisco, a benefit for The People’s Tribune co-sponsored by the Revolutionary Poets Brigade.

The Pinkneys are touring Northern California as national spokespersons against police brutality, courtroom injustice and corporate dictatorship. Rev. Pinkney is president of the Benton Harbor NAACP and has been singled out for political attack because of his years of outspoken criticism of the takeover of his local city government by Whirlpool Corp. In 2008-09 he spent a year in prison for the “crime” of quoting Deuteronomy Chapter 28 in an article condemning the behavior of a local judge.

“As far as I know he’s the first preacher in America to get put into prison for quoting the Bible,” said his attorney, Hugh “Buck” Davis. 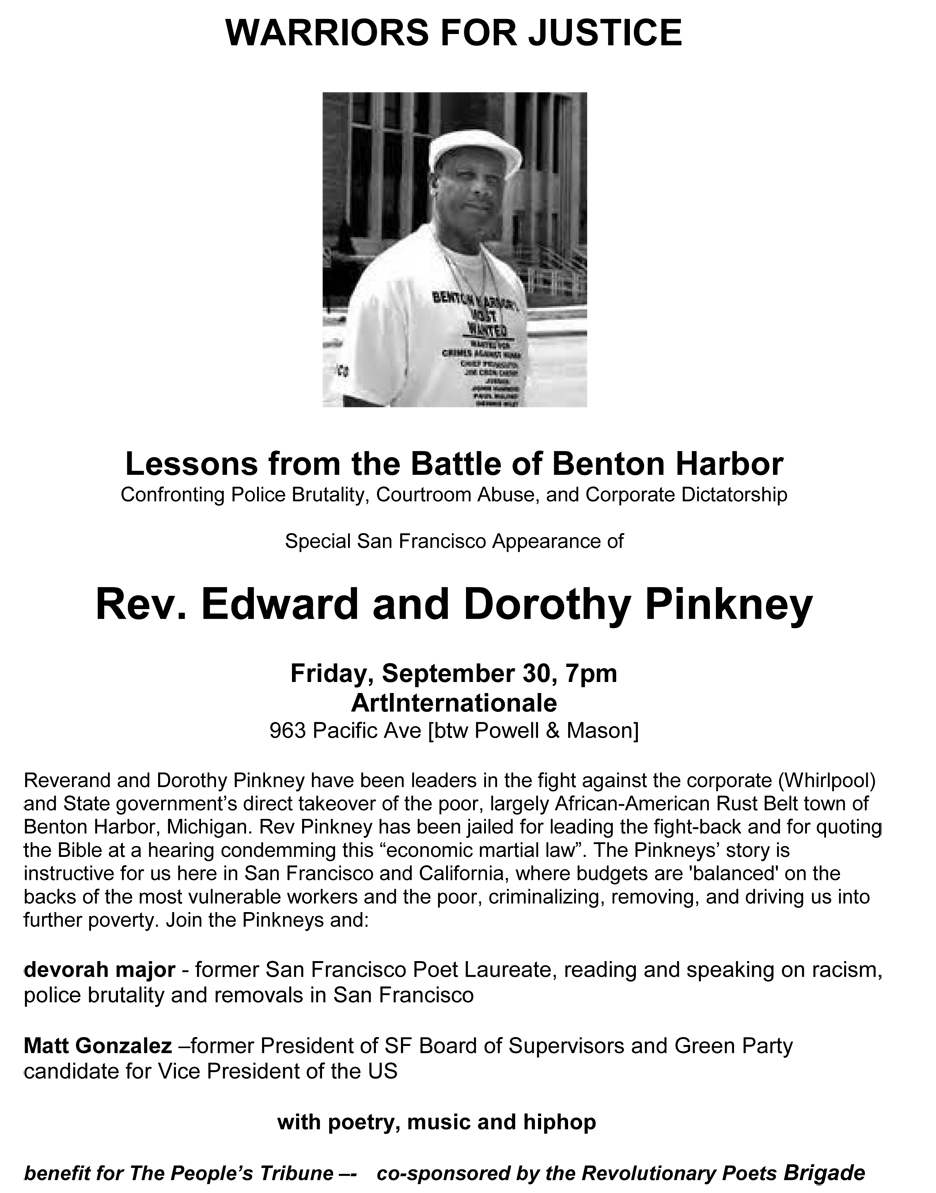 California is now entering the same crisis that has afflicted the Rust Belt for over a decade. With unemployment at 12 percent and corporate profits at record highs, the state government is actively dismantling services, education and health care programs for working people it now considers disposable. In San Jose, the City Council is trying to declare a “fiscal and public safety state of emergency” in order to loot pensions, slash wages and benefits, and undermine collective bargaining for city employees.

The Benton Harbor situation is concrete evidence of what happens when corporations and government become fully merged. Michigan’s “fiscal martial law” has stripped all lawful authority from the elected Benton Harbor mayor and City Council, and replaced them with an “emergency financial manager” who has no accountability whatsoever to the residents. The people still have taxation but now have no political representation.

This tour could not be more timely. With their strength, cheerfulness and clear analysis, Rev. Pinkney and Dorothy offer the kind of leadership we need to emulate if we are to save our democracy and our standard of living here in California as well as all across America.

The Pinkneys and the Benton Harbor resistance provide concrete evidence of the extent to which the corporations and government have become entwined in America. Their leadership shows the necessity for confronting the entire political system that creates injustice.

It is our constitutional duty as American citizens to hold our elected officials accountable for their wrongdoing, whether it is through words, action or inaction. We the people must draw the line and decide what to do if that line is crossed, and we must use our Constitution. Joseph Harris has crossed that line in the sand too many times. Joseph Harris has now cancelled Constitution Week. What is next?

In April of 2011, Joseph Harris authorized an “order prohibiting all action by all city boards, commissions and authorities, except as authorized by the emergency manager.” The order states:

“I, Joseph L. Harris, the duly appointed Emergency Manager for the City of Benton Harbor, Michigan (the ‘City’), pursuant to the power and authority granted by Act 4 of the Public Acts of Michigan of 2011, being MCL 141.1501 et seq (the ‘Act’), do hereby resolve and order as follows:

“WHEREAS, Section 19(ee) provides that the Emergency Manager may exercise any power or authority of any office, employee, department, board, commission or similar entity of the City, whether elected or appointed;

“WHEREAS, the power of the Emergency Manager as set forth in Section 19(ee) of the Act is superior to and supersedes any such officer or entity; and

“WHEREAS, now, no City Board, Commission or Authority has authority or power to act on behalf of the City as provided in the Act.

“NOW, THEREFORE BE IT RESOLVED AS FOLLOWS:

“1. Absent prior express written authorization and approval by the Emergency Manager, no City Board, Commission or Authority shall take any action for or on behalf of the City whatsoever other than:

i) Call a meeting to order.
ii) Approve of meeting minutes.
iii) Adjourn a meeting.

“2. That all prior resolutions, or acts of any kind of the City in conflict herewith are and the same shall be, to the extent of such conflict, rescinded.

“3. This order shall be effective immediately.”

Harris has stolen your vote.

The dictator and CEO Cheryl Miller of New Products Corp. are sparring over the building of non-motorized zones on her company’s property. According to the Herald Paladium: “A bike path under construction on Klock Road has become a source of contention between the Benton Harbor Emergency Financial Manager and one of the oldest businesses. Cheryl Miller asserts that the path encroaches on her corporation’s property by about five feet for a length of 100 feet. Joseph Harris said, ‘Cheryl Miller has no grounds to be complaining about the permits the city issued for the bike path.’ He added, ‘For her to be complaining is the wrong thing to do because she’s going to get an answer from me that she is not going to like.’”

This and the canceling of Constitution Week is a clear case of an emergency financial manager going wild. This is a clear case of government and Whirlpool working together against the people – and even against their friends: other corporations! It is clear that the sole role of the emergency financial manager is to force Whirlpool’s agenda to redevelop Benton Harbor for the rich and to force the poor out of the city in the process.

Listen every Sunday at 5 p.m. Eastern Time (2 p.m. Pacific Time) on blogtalkradio.com to the Pinkney to Pinkney show or call in to listen: (347) 994-3644. Rev. Pinkney can be reached at banco9342@sbcglobal.net, and visit the BANCO blog for updates on the battle for Benton Harbor.

The Rastafarians of San Quentin