‘Whoever stands with the police does not stand with the community, period!’

Editor’s note: Pack the courtroom – Dept. 12 at 850 Bryant – at 1:30 p.m. today for the arraignment on bogus charges of DeBray Carpenter, better known as Fly Benzo, resistance leader in Bayview Hunters Point. Public Defender Jeff Adachi has assured that Fly will be well represented, but he needs and deserves a crowd of supporters too. Fly is the keynote speaker Saturday at the October 22nd rally to stop police brutality. Free Fly Benzo!

The mayor is in charge of the police department. Hold Mayor Ed Lee accountable for this attempt to silence a community leader. Call him at (415) 554-6141.

Hunters Point, San Francisco, Oct. 19 – The day after the event recorded in this video, Fly Benzo was beaten and arrested by the police.

After most of the speakers spoke, the police came and told us to shut off the sound system because we did not have a permit. One of the more vocal people who spoke up was Fly, who pointed out the pettiness of the police action when there were unsolved murders in the neighborhood. Note the passive aggression being displayed when the officer’s hand is playing around with his gun when Fly was speaking out.

Just like the unsolved murder of Tupac Shakur, whose mother was a Black Panther, the “powers that be” like to shut up popular music artists who people can rally around. This is the same thing. Fly Benzo is a talented hip hop artist who has a future.

He also speaks out about the police repression in his community, Bayview Hunters Point in San Francisco. The “powers that be” who tell the police what to do want to silence him.

As Fly says at the end of the video, “Whoever stands with the police does not stand with the community, period!” 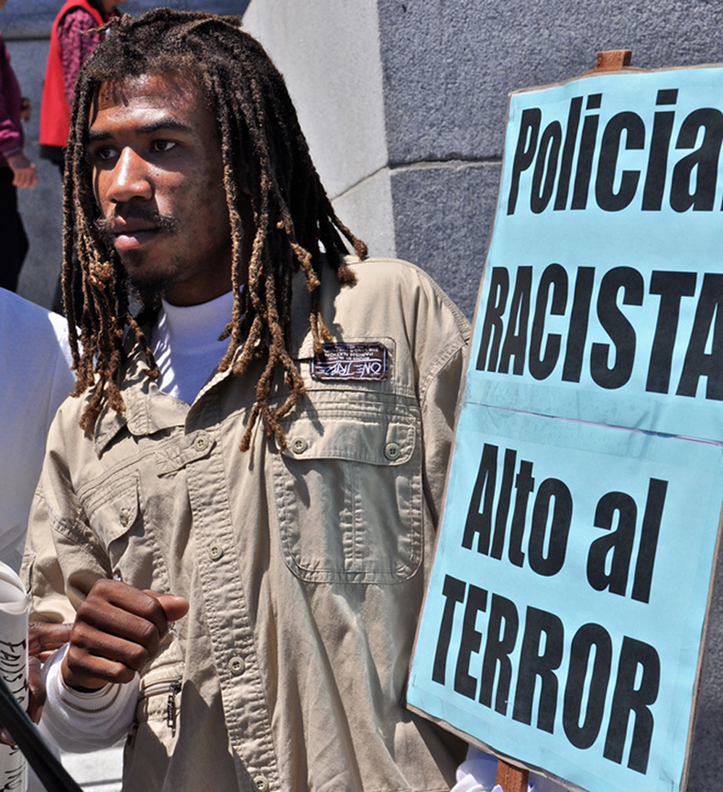 Officers from the San Francisco Police Department arrested a 21-year-old activist from Hunters Point less than 24 hours after he appeared on a public access television show where he indicted the police for a recent shooting and named officers he says have personally harassed him.

Around 4 p.m. on Saturday, July 23, Debray Carpenter, who is also known as Fly Benzo, was arrested near the intersection of Oakdale Avenue and Lane Street and booked on charges of threatening a police officer and resisting arrest. After spending almost four days in jail, the District Attorney’s Office declined to file any charges and Carpenter was released.

“If they feel like they can charge me, they would’ve,” Carpenter said after his release. “SFPD lies and that’s a fact. I just want the people to see how they lie. Just like they are lying about me, they could be lying about Kenneth Harding. Anything they say needs to be taken with a grain of salt.”

On July 16, police shot and killed Kenneth Harding Jr. while he was running from police. When officers stopped Harding at the Third and Oakdale Muni platform and asked him to produce a transfer, he bolted. The official story is that while he was running away, Harding pulled out a gun and fired at least one shot at police before they returned fire. Police later said the shot that killed him pierced his neck on the right side and was fired from his own gun; but some witnesses say that Harding didn’t have a gun and many people in the community still have doubts about what happened.

Carpenter has spoken out against Harding’s death on the TV news and he has participated in and organized protests calling for greater police accountability in the weeks following the shooting. On July 22, Carpenter appeared as the only guest on the public access program “CLAER Da Corner,” a 90-minute show hosted by Sharen Hewitt, the executive director of Community Leadership Academy and Emergency Response Project (CLAER) – an anti-violence nonprofit.

During his appearance on the program, Carpenter named several SFPD officers who he claimed had harassed him in the past. He also recounted an exchange that took place a few days earlier on July 19. It was during this encounter that police say Carpenter made the criminal threat for which he was later arrested.

The police version of the incident differs significantly from the story that Carpenter shared with Hewitt on her show before his arrest.

According to Carpenter, he was with a group of people having a casual conversation with an SFPD officer as two other officers drove up and aggressively pursued a teenager for no apparent reason. When the group asked the officers about their behavior, one of the officers explained that she’s from New York, said Carpenter.

This prompted Carpenter to bring up Sean Bell, a young man who was gunned down by the NYPD, and the officer replied, “I haven’t shot anyone, yet,” according to Carpenter.

“Y’all bleed too. Just how we bleed, y’all bleed,” Carpenter shot back.

He told the host that the officer then responded by asking, “Is that a threat?”

“No, that’s a fact,” replied Carpenter. The police then drove away, he said.

But the police say that Carpenter threatened to kill one of the officers and was aggressive from the moment they arrived.

“Carpenter started yelling at them and he said, ‘White pig bitch, I’m gonna put one in you,’” SFPD spokesman Lt. Troy Dangerfield told us.

“You bleed like I do. I’m gonna put one in you and show you,” Carpenter allegedly told police after being asked if his previous statement had been a threat, according to Dangerfield.

“There was a large crowd of people that began circling around the officers and they determined it was unsafe to make an arrest at the time,” Dangerfield said. “One of our rules is if you know somebody, you don’t have to make an arrest right there and cause a big scene.”

The police arrested Carpenter four days later and booked him for allegedly making terrorizing threats and resisting arrest. While in jail Carpenter told his lawyer, John Hamasaki, that he didn’t know why he had been arrested, and Hamasaki said at the time he wasn’t sure either.

“The arrest stinks,” Hamasaki told us. “Just an exercise of power by the police letting folks know if they speak up, they can be locked up.”

The District Attorney’s Office said that it declined to file charges because there was insufficient evidence to secure a conviction but declined to go into further detail.

“It is not uncommon for the District Attorney to drop charges that are against the police,” said Dangerfield, the police spokesman. “Unless there’s injuries, photos and things like that, they rarely want to prosecute a lot of threats against police officers, and even more resisting arrest, because they think that’s the type of business we’re in.”

“That’s bullshit,” said Hamasaki. “(Crimes against police are) the hardest things for us to negotiate to get them to come down. … The DA doesn’t want to upset the rank and file.”

“We take seriously any threats against San Franciscans whether they are uniformed sworn officers or members of the general public,” Derryck said. “We review every case on a case-by-case basis.” 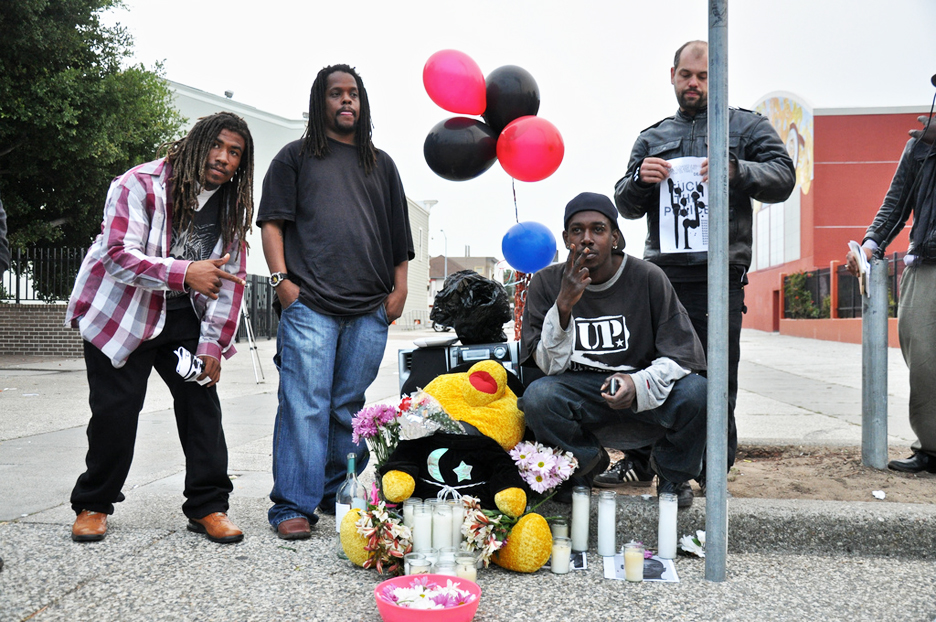 Carpenter says he isn’t the only one being targeted for his activism in Hunters Point. Police arrested Henry Taylor, 54, as he was on his way to speak up at the July 20 town hall meeting at the Bayview Opera House in which Chief Greg Suhr’s appearance ignited pandemonium (see “Anger erupts over police shootings,” July 27).

No recordings are known to exist between Carpenter and the officer, just as no video recordings have revealed exactly what happened between Harding and the police on the Third Street Muni platform. There are several videos of the immediate aftermath, including footage of Harding writhing on the ground while police raised their weapons and denied him first aid, but apparently no video of the shooting itself.

In Oakland, all officers are now issued small cameras to wear on their uniforms that record every interaction an officer has with the public. In the case of both Carpenter and Harding, such equipment would likely provide answers to what actually transpired, but Dangerfield said the SFPD has no plans to follow Oakland’s lead.

“I know the chief of police has said he is looking into cameras for officers who do plain clothes assignments and warrant arrests and things like that. For the general patrol force, at this point, that’s not the case,” Dangerfield said. “There are some officers who do carry their own. … There’s no rule that says that can’t be done.”

Josh Wolf, a freelance journalist and documentary filmmaker, is a recent graduate of the UC Berkeley Graduate School of Journalism with an emphasis in documentary film production. Wolf spent 226 days in a federal detention center defending the “reporter’s privilege” after the FBI demanded his source material and called on him to testify before a federal grand jury about a protest he filmed in San Francisco. He can be reached at web@joshwolf.net. This story was written for and originally appeared in the San Francisco Bay Guardian. It is reprinted with the Guardian’s kind permission.