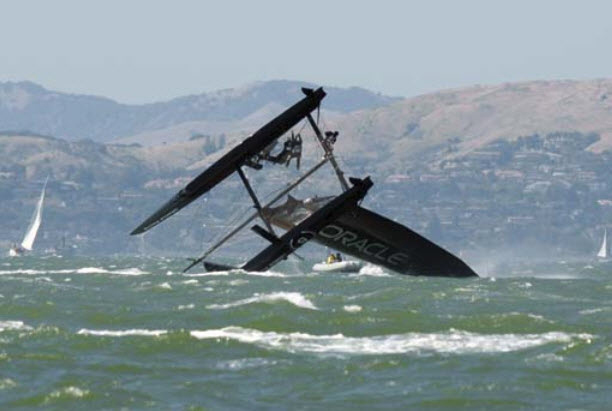 San Francisco, Feb. 15 – In the Board of Supervisors Budget and Finance Committee this afternoon, a resolution approving the 34th America’s Cup nears a vote as a stormy outlook forms over the project. On top of questions around project terms, the question of local hiring on America’s Cup remains unresolved, despite an outpouring of dozens of community and labor advocates in support of local hiring two weeks ago. Just this week, advocates shared with Mayor Lee and policy makers a December 2010 agreement in which the America’s Cup Event Authority committed to complying with the San Francisco Local Hiring Policy for Construction on all aspects of pre- and post-event construction.

Assemblymember Tom Ammiano, who authored state legislation to finance the America’s Cup and other infrastructure investments, weighed in on the side of community and labor advocates this morning in a letter to the Board of Supervisors.

Changing course in early 2012, the America’s Cup Event Authority first argued that receipt of public financing through Assemblymember Ammiano’s legislation does not obligate the authority to follow the City’s prevailing wage, local hiring and local business requirements, despite its binding commitment to the contrary in the December 2010 Host and Venue Agreement. 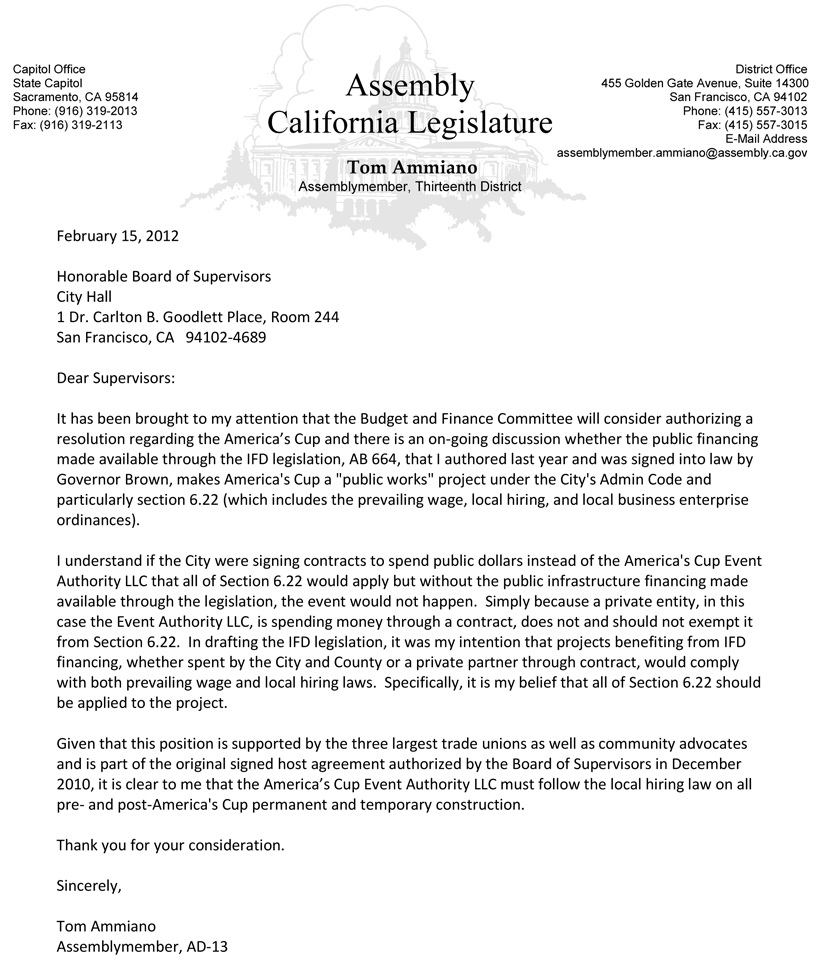 In this morning’s letter from Assemblymember Ammiano, however, Ammiano explicitly rejected this argument and affirmed the intent of his legislation, AB 664, was to make America’s Cup a “public works” project under the City’s Administrative Code and require compliance with the City’s popular year-old local hiring law. Given that the public infrastructure financing is crucial to the event, Assemblymember Ammiano also rejected the contention that the Event Authority is exempted simply because it is a private entity spending taxpayer dollars through a private contract.

The Budget and Finance Committee will be asked by advocates to delay further consideration of the America’s Cup until the local hiring issue is resolved to their satisfaction and the Event Authority makes good on its commitment to comply with the City’s local hiring policy.

San Francisco, Feb. 2 – Those in search of further evidence of the death of “good faith efforts” local hiring in San Francisco need look no further than the Feb. 1 City Hall hearing on the proposed America’s Cup jobs plan.

At the Board of Supervisors Budget Committee, over 60 community advocates, workers of color and labor leaders came out in support of a longstanding demand for use of the City’s local hiring and prevailing wage policies on construction jobs to be created by the America’s Cup. Thousands of jobs will be created as the America’s Cup reconstructs the San Francisco waterfront and builds temporary spectator seating and an “America’s Cup Village.”

Local hiring was another story.

America’s Cup proposed a plan centered around the throwback era of “good faith efforts” local hiring, in which no contractor was ever penalized for failing to hire local and disadvantaged residents in the 40-year history of “good faith.” In late 2010, community advocates, labor leaders, workers, contractors, environmentalists, civil rights groups and a broad cross-section of policy makers came together to craft the San Francisco Local Hiring Policy for Construction as a response to the failure of good faith. The law was authored by Supervisor Avalos, and Mayor Edwin Lee has made “aggressively implementing San Francisco’s landmark Local Hire Ordinance” part of his 17-point jobs plan.

Dozens of speakers, including representatives of the Coalition of Black Trade Unionists, the A. Philip Randolph Institute, Chinese for Affirmative Action, Laborers Local 261, Carpenters Local 22, Mission Hiring Hall, the Greenlining Institute, Coleman Advocates for Youth and Children, the San Francisco Conservation Corps, Brightline, Anders & Anders Foundation and the San Francisco Green Party called for the America’s Cup to promote workforce inclusion through the City’s local hiring policy instead of rolling back the clock to failed “good faith efforts.”

After a debate about whether the America’s Cup, which organizers concede is funded by public dollars, is a public, private or quasi-public project, the public overwhelmingly called for the America’s Cup Event Authority to step up to utilize the City’s policy rather than re-inventing a new “good faith” plan.

No one spoke in opposition to the notion.

“These are relationships we have that are financial that there’s a mutual benefit that I think we can extend for this event that can actually ring out to our neighborhoods, our labor organizations, our community members here in San Francisco,” said Supervisor Avalos, after lauding the America’s Cup’s commitment to prevailing wage. “I really hope that the Event Authority can come together with these groups on the very last part of this agreement, the workforce development plan, to look at how we can get the local hire ordinance to come through here.”

“I think we’ve heard it loud and clear today that ‘good faith’ efforts often haven’t worked in previous projects,” said Supervisor Jane Kim. “I certainly look forward to working with the Event Authority to make these promises stronger both to our communities and our neighborhoods that will be impacted by the event itself.”

Supervisor Chu noted, “We want to see the America’s Cup be successful … One good way to do that is to make sure we are hiring, we are involving our residents on many levels.”

Espanola Jackson, often called the Godmother of Bayview Hunters Point, noted, “Good faith efforts has never worked for workers of color in San Francisco. We have no faith in good faith.”

“America’s Cup is truly symbolic for the City, to be able to host an international sports event and the economic development it will bring,” said Chinese for Affirmative Action director of community initiatives Jenny Lam. “We want to recognize that it’s an important step to commit to prevailing wage across the board. At the same time, we believe ‘good faith’ has failed. We believe the best way to realize the America’s Cup hiring goals is to embrace the City’s local hiring policy.”

“‘Good faith efforts’ at best is a catch-up system. It takes a lot of money, a lot of effort to really, really deliver on. This local ordinance cuts through all of that,” said Don Marcos, executive director of Mission Hiring Hall. “We have to promote this ordinance, because it is the one that will actually accomplish the goals of the compliance program.”

“I support the adoption of local hiring and prevailing wage on the America’s Cup. Local hiring tends to help local businesses and local residents,” said Florence Kong, president of Kwan Wo Ironworks, who also noted that her construction projects in Stockton require 50-75 percent local hiring under that city’s policy.

“I want to commend the authority for sitting down and talking to us, and accepting the basic crafts’ proposal,” said David De La Torre, secretary-treasurer of Laborers Union, Local 261. “However, I am disappointed that there is a disagreement between the semantics of ‘good faith’ and mandatory … Given the history of good faith, it’s a failed policy. It hasn’t worked then and I’m not so confident it will work on this project.”

“The community came together to pass a new local hiring law as response to the concerns and ambiguities of good faith,” said James Bryant, Western director for the A. Philip Randolph Institute community-labor partnership. “Prevailing wage means that now we can expect good-paying union jobs. But ‘good faith’ did not work for women and our low-income communities of color,” said APRI San Francisco executive director Jacqueline Flin.

“There’s no question that the need for jobs, jobs with prevailing wages exists in San Francisco,” said Chelsea Boilard, director of programs with Coleman Advocates for Youth and Children.

The City’s local hiring policy currently covers $60 million of construction projects, including the Pier 27 cruise ship terminal that broke ground this week, which all have on average come in under budget, plus another $300 million currently open for bid.

Community and labor groups, as well as all three Budget Committee supervisors, appear to have sent a clear signal of support for use of the local hiring law on the America’s Cup.