by Tiny aka Lisa Gray-Garcia, Tiburcio Garcia-Gray and Solomon Kealoha 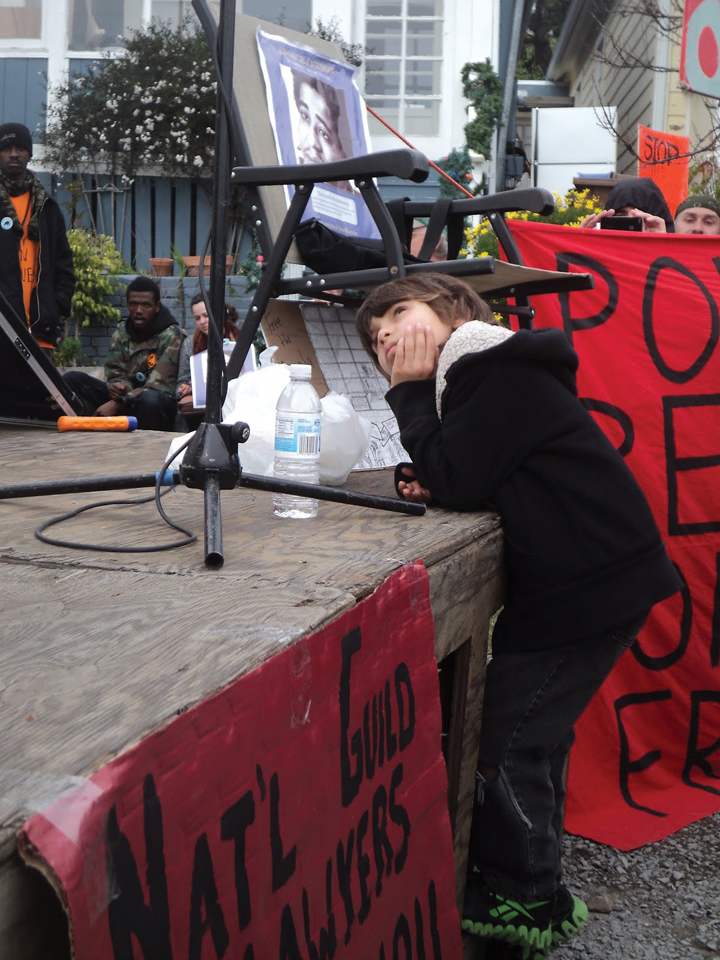 It was Dead Prez day in Amerikkka. Feb. 20 to be exact. To “celebrate,” I took Poor News Network and FAMILY Project youth skolaz, including my 8-year-old son, to San Quentin plantation aka prison to support the action “Occupy4Prisoners.” San Quentin, where thousands of men, mostly poor, many with undiagnosed disabilities, mostly of color, reside, in the 21st century plantation/prison system. Oddly, due to a deeply po’lice state coordinated (Not Your) Homeland Security effort, we almost didn’t make it there.

From the moment we drove in with the POOR Magazine “news” truck we found not one, but FOUR off-ramps off of 280 and 101 closed to ALL traffic from Richmond, San Rafael and San Francisco. This was done for the sole purpose of confusing or completely blocking all traffic to and from the plantation. We got through, as did hundreds of others, due to sheer refusal to give up. By any means necessary!

We found not one, but FOUR off-ramps off of 280 and 101 closed to ALL traffic from Richmond, San Rafael and San Francisco. This was done for the sole purpose of confusing or completely blocking all traffic to and from the plantation.

“I am here for the woman who is doing 25 to life for stealing a 99-cent lemon lime soda from the store,” one of the powerful speakers, a prison industrial complex survivor and member of All of Us or None declared, addressing the crowd gathered at the mouth of San Quentin today for a herstoric rally. There were poets, survivors, youth and elders speaking about the plantation system and the direct actions we must take to make change happen.

For me, a formerly incarcerated poverty skolar and criminalized mama, this powerful event resonated deeply, bringing meaning to the “occupy” movement and showing that its power is to support existent fights and organizing efforts for silenced peoples that have been raging on for years as well as to shed light on the increasingly po’lice controlled state that we all live under.

The plantation system rages on around us, incarcerating every poor person it gets …

From the po’lice to the kkkourts, millions of dollars are made by the 1 percent white supremacist informed system to arrest, adjudicate and eventually incarcerate folks for countless non-violent crimes under the insanity of “three strikes” and other legislation that sweeps people into prison.

As an indigenous person living on these “occupied” lands, I find it hypocritical to use the “empire’s” words, i.e., “occupy,” especially in relation to the stolen and occupied Native land upon which San Quentin plantation dwells and the sad reality that a large number of the occupied peoples inside the plantation are indigenous peoples, from Hawaii to Puerto Rico, from Mexico to Africa, whose lands and resources were stolen by European immigrants with guns, poisons and paper trails.

“This day is beautiful – but it’s also about action,” said prison revolutionary and PIC survivor and member of All of us or None Dorsey Nunn, addressing the crowd, reminding us all that we must use whatever energy we have to start speaking up to legislators and the governor in California about what needs to be done, what we heard and what we have the power to change. Together.

The ‘Solidarity Steps for Decolonization/Occupation Efforts’ across the country

1. Abolishing unjust sentences, such as the death penalty, life without the possibility of parole, three strikes, juvenile life without parole, and the practice of trying children as adults.

2. Standing in solidarity with movements initiated by prisoners and taking action to support prisoner demands, including the Georgia Prison Strike and the Pelican Bay-California Prisoners Hunger Strikes.

4. Demanding an end to the repression of activists, specifically the targeting of African Americans and those with histories of incarceration, such as Khali of Occupy Oakland, who could now face a life sentence on trumped-up charges, and many others being falsely charged after only exercising their First Amendment rights.

5. Demanding an end to the brutality of the current system, including the torture of those who have lived for many years in Security Housing Units (SHUs) or in other forms of solitary confinement.

6. Demanding that our tax money spent on isolating, harming and killing prisoners instead be invested in improving the quality of life for all and be spent on education, housing, health care, mental health care and other human services which contribute to the public good.