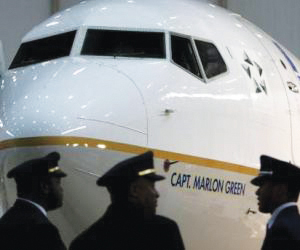 San Francisco – Twenty-four long-term employees of United Continental Holdings, Inc. (NYSE: UAL), United Air Lines, Inc., and Continental Airlines, Inc., filed a lawsuit May 29 alleging race discrimination, retaliation and harassment in violation of the Civil Rights Act of 1964 and state fair employment laws. The complaint claims United Airlines violated federal and state laws by maintaining policies that have a disparate impact on African-Americans’ opportunities for promotions. The complaint also alleges that UAL systematically engages in an ongoing pattern and practice of intentional discrimination in assignments and promotions against its African-American captains and operation supervisors.

The lawsuit, which was filed in the U.S. District Court for the Northern District of California, alleges a long history of unlawful discriminatory behavior across multiple states in which the companies operate.

“The struggle for inclusion at United Airlines is a long-standing issue that many have tried to address over a long period of time,” commented Capt. Leon Miller, a plaintiff in the case against United. “We must break the glass ceiling and stop retaliatory actions and make a corporate culture change that is truly inclusive.”

The plaintiffs claim that UAL discriminates against minority captains and supervisors by use of a dual employment track, pre-selection and “grooming” of non-minority employees for promotion and the maintenance of largely segregated job categories and departments. According to the complaint, UAL disproportionately assigns non-minority employees to temporary management positions that are more lucrative and provide employees with more opportunities for advancement, greater job security, and greater pay and benefits, to which similarly qualified minority employees are rarely assigned.

“We have endured a habitual, longstanding pattern of discriminatory behavior at the hands of UAL,” said Capt. Terry Haynie. “From the Tuskegee Airmen who shed blood to defend a segregated nation in World War II to Capt. Marlon Green’s (Continental Airlines) Supreme Court decision (March 28, 1963), to Capt. Jim Edwards (United Airlines, 1967), determined individuals broke the color barrier in the commercial airline industry. We still have airlines that will take your money to travel but do not have significant diversity in senior management and the ‘corner suites.’”

UAL has a long history of race discrimination issues dating back to 1970s. In the release from the EEOC Consent Decree against United Airlines issued March 2, 1995, Judge Hubert Will commented, “We caution that our conclusion is not a determination that employment discrimination may no longer be a problem at United.”

In addition to the main allegations, 11 of the 24 plaintiffs have claimed retaliation by UAL stemming from charges they filed with the EEOC in 2010 for race discrimination under Title VII. The plaintiffs maintain that UAL had actual knowledge of the 2010 charges and, in direct retaliation for filing those charges and participating in the EEOC process, UAL has withheld all promotions and special assignments. Several of the plaintiffs have also alleged wrongful, severe and pervasive harassment and discrimination on account of race by UAL and failure to remedy the hostile environment and acts of harassment.

The plaintiffs are seeking an end to these discriminatory practices, and declaratory and injunctive relief, including rightful place relief, back pay, front pay and compensatory and punitive damages for the individual plaintiffs. For a copy of the complaint, visit Unitedwestandfordiversity.com.