These are the culprits:

1. Associate Warden K.L. McGuyer, who once oversaw the Investigative Service Unit (ISU) as captain, where he illegally terrorized prisoners in the Short Corridor and their families by harassing their incoming and outgoing mail. He was promoted for this service to associate warden, sometimes titled correctional administrator. K.L. McGuyer is a racist who makes that point very clear in any of his dealings. He, in my opinion and I am 99 percent sure that those in the Short Corridor will agree with my assessment of him, has no business working inside any prison when he has responsibility for overseeing people of color.

2. Capt. T. Wood is a racist who hates New Afrikans (Blacks). He can stomach Mexicans to a degree, but he hates New Afrikans with a passion. It literally repulses him to even have to deal with them. He’s a very dangerous man because of his inherited racist beliefs, which he believes entitle him to do what he pleases to people of color.

3. Capt. J.A. Rollins: Her willingness to subject prisoners to whatever validates her illegal practice and abuse of power, even when the prisoner has the support of Pelican Bay policy in his favor. She overrides policy. I once went to Institutional Classification Committee (ICC) and was explaining a situation in relation to the program, and Capt. Rollins, in order to appease me, told me that she would take care of it. But I turned around for a split second and I could see her winking her eye with a sinister smile to my counselor, suggesting to me that she is not going to do nothing. We are not dealing with decent people. She did this simply because it was a room of all white officials and she was blatantly comfortable explicitly including the rest of them in her racist practices. She’s a liar and a racist and has no regard for prison policy.

These are the officials who oversee the programming of the C and D Sections of the Security Housing Unit, the SHU. They are responsible for making sure that the SHU is running officially, i.e., professionally. 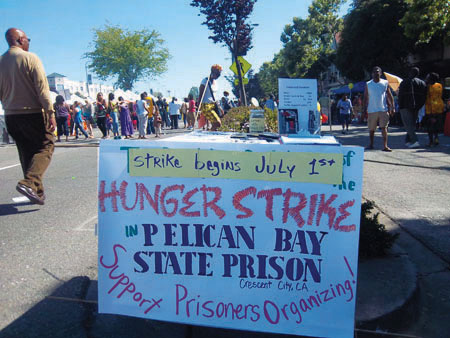 On June 1, 2011, before our July 1, 2011, hunger strike, Assistant Warden K.L. McGuyer, Capt. T. Wood and Capt. J.A. Rollins approved a memorandum. On July 6, 2011, these same officers rescinded the June 1, 2011, memorandum, but it was never enforced, and we SHU prisoners were allowed to have our food from canteen, in packaging, for nine months with NO PROBLEMS. When the May canteen arrived, we were told that the items would be removed from the bags they came in, causing nothing but mental torment and ANGER.

The officials, from Secretary Cate down to the lieutenants, are responsible for all policies. The officers consist of the CCPOA (California Correctional Peace Officers Association) union and sergeants. When the officials realized that our mediation team attorneys were filing a class action lawsuit against CDCR officials for violating our human rights and subjecting us to torture for the last 25 plus years, CDCR officials began retaliating against us by utilizing their draconian policies in the name of safety and security of the institution.

The prison officials believe that they have a right to subject us prisoners to physical and psychological torment simply because we choose to fight peacefully for our basic human rights. Therefore, if we prisoners challenge an injustice against us, then we prisoners will have hell to pay, because in their eyes we do not have the right to challenge anything.

That is why the officials in Sacramento ordered all hunger strike prisoners throughout the state that CDCR believed to be leaders to be taken to Administration Segregation Units (ASU) and to be subjected to physical torture during the last hunger strike, which began Sept. 26, 2011, when all that we prisoners did was refuse to eat in a peaceful protest for violations of our human rights. Yet we were attacked.

The prison officials believe that they have a right to subject us prisoners to physical and psychological torment simply because we choose to fight peacefully for our basic human rights.

Now, our lawyers have decided to challenge CDCR’s draconian policy, where we prisoners are being held in solitary confinement anywhere from one year to 40 years and counting for nothing other than alleged gang membership or association.

I asked myself, “What would make a state treat human beings the way we are being treated?” And the answer is HATE. These policies and decisions are exclusively made by white racist men and women. Nowhere in the world are human beings being treated as such. But are people of color considered human beings in the eyes of a white racist? Who is responsible for overseeing their lives? We are talking about prisoners who have nothing to lose and have carried themselves as role model prisoners under attacks by the officials and officers.

In the month of May 2012, we prisoners received our canteen and the officers began saying that the items have to be removed from the bags. Now we prisoners just got new food items approved on our canteen list, i.e., sausages, hot jalapeno pickles etc. It was only after we received our canteen that we were told that the food items would be removed from their containers. This set off a very angry response because prisoners had pickle juice poured out, sausage meat exposed etc.

“What would make a state treat human beings the way we are being treated?” And the answer is HATE.

Prisoners were extremely angry. Our four representatives had to inform us – many of us already knew this – that the CDCR was trying to provoke us into an incident, because they are pissed off over the class action lawsuit. Previously, former Undersecretary Scott Kernan had threatened our four representatives to not file the lawsuit, saying, “We can resolve all this ‘in house,’” as if we were to accept being held illegally in solitary confinement indefinitely. These officials fail to realize that prisoners are committed to the peaceful struggle and by no means do we plan on giving up, under any circumstances.

The officers – CCPOA prison guards union – have begun to propagate the lie that they were told by Sacramento to remove all plastic containers from our canteen items. When the officers were asked why they were throwing away (pouring out) our pickle juice, they responded, “I’ve been gassed before.” It is these very psychological games that continue the ongoing psychological torment because the CDCR and PBSP administrators use our food, mail, canteen and medical care however they see fit, whenever they choose to, in order to cause mental torment, anger and cause us stress which leads to poor health.

The IGI and ISU spread a rumor that we were going on, or planning on, a hunger strike. This they did in order to stir up something, but our four principle representatives put in CDCR-22 request forms for an immediate meeting with Assistant Warden P.T. Smith, instead of Capt. T. Wood. They held the meeting, they spoke clearly, informing him that if we are going to go on any protest that we will inform you all first, before we do anything like we have been doing on the other two hunger strikes.

These officials fail to realize that prisoners are committed to the peaceful struggle and by no means do we plan on giving up, under any circumstances.

The placing of us in the ASU or writing us up for frivolous CDCR RVR 115s is not deterring us from our protracted struggle under ANY circumstances. We will continue to fight peacefully for our human rights collectively against torture to which we continue to be subjected to today. No attacks or restrictions of privileges will deter us prisoners from that fight.

Our five core demands have not been implemented and the CDCR and PBSP officials are doing everything in their power possible to disregard our five core demands. Every demand is equally important, so our peaceful demonstrations will continue to lead this protracted struggle. 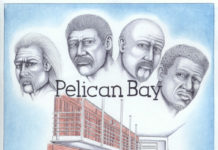 We can’t breathe! Thoughts on our Agreement to End Hostilities