Early Tuesday morning, what would have been the 18th day of the Lakeview Elementary Sit-In and 12th day of the People’s School, the OUSD (Oakland Unified School District) police, along with other police forces from across Oakland, raided the encampment and school. While participants were allowed to remove their items, the police arrested a parent as well as a former student of Lakeview and subsequently constructed a fence to block entrance to the school. 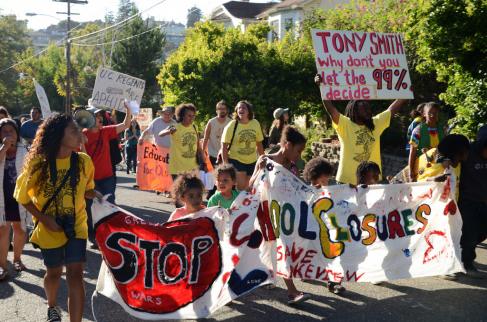 Lakeview Elementary has been a fixture of this neighborhood for nearly 100 years and supported the development of thousands of Oakland children. The moving trucks that began to arrive this morning (Friday, July 6) to clear out classrooms highlight the question: Should Oakland allow this space, so central to the vitality of the community, to be dismantled and made into district offices?

The Lakeview building was critical to the maintenance of the People’s School. Although we have been evicted from a school that belongs to the community, this does not signify defeat or that the group has given up on the fight for quality education. The People’s School will continue next week on Tuesday and Thursday, July 10 and 12.

In a recent article, Oakland Tribune education reporter Katie Murphy writes that Tony Smith believes “that schools can – and must – help transform entire communities through love and a sense of collective responsibility for children.” While the People’s School and the Lakeview Sit-In directly attempted this through providing free essential services to children, Tony Smith’s actions directly contrast with this statement.

The closure of schools and displacement of thousands of children to already overcrowded schools does not cultivate a loving, supportive environment for children. Instead it negatively impacts the ability for parents to transport their children to school, ruptures the relationships of students from their teachers and one another, and destabilizes essential support systems for entire communities.

Tony Smith is quoted saying that he hears the “discontent with the current outcomes” and that he realizes “the change isn’t happening fast enough for everybody.” Currently the trajectory of Smith’s policies point to change in the wrong direction. If the change he wants is the cutting of services and programs such as adult education and special education, attacking teachers and school workers, school closures and privatizing education, there will be nothing left of the public school system when Smith leaves.

The People’s School has been a success and provides a model which others can use for re-imagining a more enriching and empowering public education in stark contrast to the system Tony Smith is propagating. It has become a symbol of resistance and received positive support from the Oakland community; thus it will continue for two days next week.

Beyond the People’s School, the Lakeview Sit-In continues to build a powerful community-labor alliance and picket sanctioned by the Alameda Labor Council to block the move-in of the administrative offices at Lakeview. In addition, in the continued effort to connect the fight against the criminalization of Black and Brown youth with the dismantling of the public education system members of the sit-in are joining the march today for Raheim Brown, a youth murdered by OUSD cops at a Skyline High dance. His murderer was the sergeant who gave the dispersal order during the raid on the Lakeview Sit-In.

There will also be a celebration and convergence focusing on Public Education next Sunday, July 15, 5 p.m., at Splash Pad Park featuring performances by Boots Riley and other speakers.

The 18th day of the Lakeview Elementary School Sit-In and People’s School for Public Education experienced a police raid that successfully shut down the direct action. In the early morning, around 4:20 a.m., police – led by Sgt. Barhin Bhatt, the officer responsible for shooting and killing an unarmed Raheim Brown in January 2011– gave an initial dispersal order and instructed all those looking to be arrested to sit in a designated area. Two Lakeview community members chose to be arrested, one a parent of Lakeview and the other a former student and longtime Lakeview supporter. All other supporters were allowed to gather their belongings and leave the premises without an arrest. 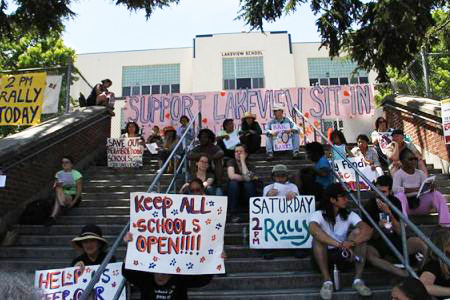 In response, the Education Committee of Occupy Oakland organized a rally and march just outside the front gates at Lakeview at 5 p.m. that evening.

The rally featured parents, teachers and students who participated in the sit-in and People’s School. The program was a combination of calling out and shaming Tony Smith and the School Board for shutting down such a positive action and also a call for people to get involved in the organizing against the austerity inspired policies of the Oakland Unified School District.

There was a militant energy in the air coupled with smoke from dried sage provided by an indigenous elder supportive of the action. A long time adult-education teacher and veteran education activist credited our action with swaying the School Board to vote against a proposed $4 million dollar cut to special education. He made the point that this marked the first time in three years that the board voted against Tony Smith and felt this to be a contributing factor in shutting down our efforts.

Three candidates for the upcoming school board elections called on the crowd to support their campaigns to bring about a much needed change for Oakland’s public schools. Four students from the People’s School for Public Education called for an end to the police presence and for the people to continue using the building for its intended purpose – public education.

The student speeches were very inspiring and were met with loud cheering and applause. An education committee organizer wrapped up the rally with a call-out for everyone to continue actively supporting these types of actions.

The last speaker, a recently fired OUSD teacher, announced there would be a student-led march to Tony Smith’s house to confront him face to face and let his entire neighborhood know just who their neighbor is and what he’s all about. The march was filled with militant chants in favor of “education not incarceration” along with music provided by the Occupy Oakland sound team.

Upon arriving to Tony’s house there were calls for him to “reopen or resign” and a continuation of the rally started back at Lakeview. One of the students from the People’s School called on Superintendent Smith to show his face. Despite him either not being there or else hiding behind the walls of his bourgeois home, it was nonetheless positive to see many of his neighbors outside their homes and supportive of our presence in that neighborhood. All in all it was a vibrant first volley in response to the police raid on the Lakeview Sit-In.

Now back to the political nature of this action and the reason why the sit-in was an extremely important step for the working class , i.e., the use of the building. The “use value” of a commodity is defined as the qualitative aspect of value – its usefulness to people – as opposed to “exchange value,” its worth in exchange for something else, like money, which denotes the quantitative aspect of value.

The parents, teachers and students reopened the building, a commodity, for its use value. The People’s School for Public Education was holding social justice classes. Members of the education committee were building a people’s library and were to planning to call it La Casita II in honor of the parents who led a successful occupation to keep open a field house library on the grounds of Whittier Elementary on Chicago’s South Side.

The grounds around the school were being used for lessons in gardening, drumming, sports etc. On Sunday, July 1, the building was opened up to the wider Oakland community. The education committee hosted a barbeque and potluck followed by a movie screening of “The Inconvenient Truth Behind Waiting for Superman.”

All these were arguably qualitative leaps when compared to the day-to-day operation of the former Lakeview Elementary School. Once the state realized the building was being used not only for a People’s School but also as a community space for political education and culture, they quickly sent their armed thugs to smash the occupation and school.

The state, in this case Superintendent Tony Smith and the School Board, has no interest in the use value of Lakeview or any of the other four elementary schools. These public schools are being closed because of the exchange value of their buildings and grounds.

Next year Lakeview, located in an area with high property values, will host administrative offices. These offices will be housed there while a brand new administration building is completed. Once the new building is ready, the district will no doubt look to rent out Lakeview to a charter school or sell the property to a developer.

Santa Fe Elementary, the last public school in Oakland’s 94608 zip code, is being leased to Emeryville. Lazear Elementary, whose parents and teachers were denied a charter by Oakland Unified after the district recommended this course to avoid closure, will be a charter school after all because the county granted them their charter and OUSD grudgingly allowed them the use of the building and grounds. Why grudgingly? Because the district intended to sell the property to Target, and the site was to become another corporate chain store.

Thurgood Marshall and Maxwell Park are both being leased to charter school organizations. These closures are not based on anything except Tony Smith and the School Board wanting to generate revenue to balance a public education budget decimated by austerity. And it just so happens that this fits in with a nationwide trend to dismantle public education in favor of charter schools, which represent the transitional stages for the ruling class to privatize education across the country.

Use value over exchange value is why the Lakeview Sit-In is an extremely important action that should be publicized far and wide. The goals of this action were clear from the beginning – the people taking back what is rightfully theirs and using it for its intended purpose while demanding that the state stop closing neighborhood schools to balance their austerity budgets, stop union busting, and fully fund free public education.

Every urban center in the country that is being bombarded with the same ruling class privatization strategy should hear about the People’s School for Public Education. The working class must continue and escalate these types of actions. Failure to do so will mean losing access to a major component of our own reproduction – free public education.

This story first appeared on Advance the Struggle July 5.