I knew Richard Aoki from the period of the late 1990s to the end of his life in 2009. Prior to the publication of Diane Fujino’s book, “Samurai among Panthers” (University of Minnesota Press), I probably was the main person who had published the most about Aoki (cf., “Legacy to Liberation: Politics and Culture of Revolutionary Asian Pacific America,” AK Press). 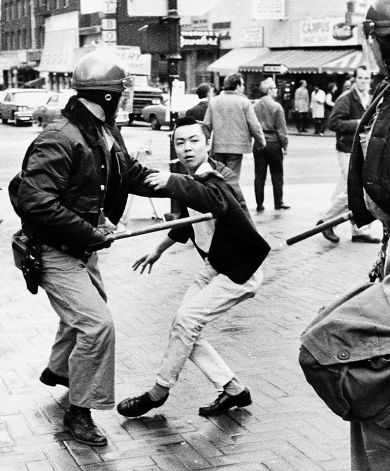 In fact, Richard Aoki and I spoke on the telephone a day or two before he killed himself. During the spring of 2009, we were in regular contact via telephone – as he was in the Bay Area and I in New York City – as I had undergone another surgery in the cancer war I have been fighting since 2006, and he was facing major illness and deterioration, hospitalized during this time. Richard regularly contacted me, as he was very concerned about my dying, and I was concerned for him as well.

We had a very special relationship that allows me to easily, comfortably and assertively rebut the claims made by the two proponents of the accusation that Richard Aoki was an FBI informant.

What was our special relationship? Richard was exasperated at how creative, revolutionary ideology had seriously waned, both from Panther veterans and from the younger generation stuck in the Non-Profit Industrial Complex mode of organization and their “activistism” – or what I humorously proffer as “activistitis,” the political tendency to be tremendously busy with activism but failing to have a revolutionary vision guide and dominate that activism.

As Fujino remarks, Aoki viewed me as someone with creative revolutionary ideology and he sought me out and we shared many discussions and a special closeness. (Note: Aoki did not know the brilliant political prisoner, Russell Maroon Shoatz, someone who now at age 68 could go toe-to-toe ideologically with Richard Aoki!) 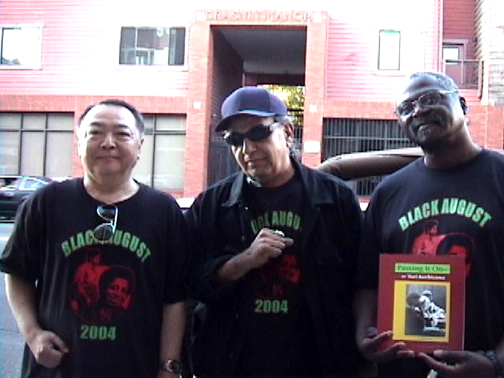 Why would an FBI agent do this, almost 50 years past the hoorah days of the ‘60s? It is implied by the calumnious assertions by journalist Seth Rosenfeld – whose book is opportunistically coming out today: “Subversives: The FBI’s War on Student Radicalism, and Reagan’s Rise to Power” (Farrar, Straus and Giroux) – that Aoki was probably still an agent even to the time of his death, though, like the rest of the “evidence” or assertions by Rosenfeld, never substantiated or clearly documented.

That is because Aoki NEVER was an agent, and unlike many of the prominent Panthers – notably Bobby Seale and Huey P. Newton – remained a revolutionary for life and never degenerated into self-obsession and egomania. To the end of his life, Aoki could go toe-to-toe with any revolutionary intellectual, theorist or organizer on the complexities and challenges of revolutionary theory, including the U.S. “national question,” socialism etc.

Aoki NEVER was an agent, and unlike many of the prominent Panthers remained a revolutionary for life and never degenerated into self-obsession and egomania.

Here is my rebuttal to Seth Rosenfeld and to former FBI agent Wes Swearingen, the two main proponents of the Aoki-was-an-FBI-agent claim.

1. The written FBI documents are very vague and much is redacted. The T-2 identification has Richard Aoki’s middle name incorrectly listed. All other identities of other informants are redacted. Why? Why was only Aoki “revealed”? This is the only real factual evidence that Rosenfeld has to offer. The rest is supposition and surmise. 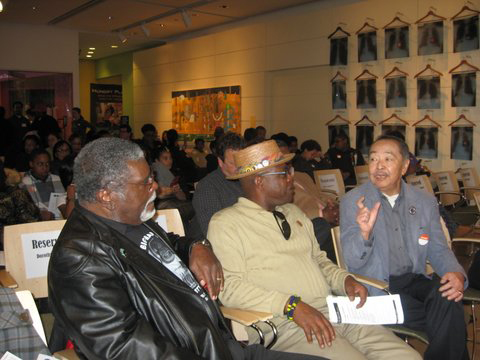 2. Scott Kurashige asserts in his contextualization and weak challenge to Rosenfeld that perhaps Aoki during the 1950s had agreed to be an FBI informant during a period in Aoki’s life when he wasn’t interested in politics or “communism.” But that later, in the ‘60s, when Aoki, as so many of that generation got radicalized, he couldn’t admit to what he had done earlier as it would have cast huge aspersion and suspicion around him among the Panthers who were quick to be intolerant and unwilling to accept such past mistakes.

However, Kurashige falls short here. Even if this were the case, that Richard had naively agreed to be an informant in his youth, prior to being radicalized, and couldn’t admit to it later, what is impossible to reconcile is that the entire 50-year arc of Richard’s life and work has helped the movement far more than hindered or harmed it.

3. If Richard was a FBI agent, how did he help the FBI? By training the Panthers in Marxist ideology, socialism? By leading drill classes at 7 a.m. daily and instilling iron discipline in their ranks? By being one of the leaders to bring about Ethnic (Third World) Studies in the U.S.? Other questions that aren’t answered by Rosenfeld: How much was Aoki paid if he was an agent? What did Aoki get out of it? How long was he an agent for? There is no evidence that Aoki sabotaged, fomented divisions, incited violence etc.

The over-emphasis upon Aoki providing the Panthers their first firearms is sensationalist fodder. What is conveniently ignored is what he contributed most to the Panthers and to the legacy of the U.S. revolutionary movement: promoting revolutionary study, ideology and disciplined organization. That’s why he was field marshal – because the cat could organize and tolerated no indiscipline and lack of seriousness. 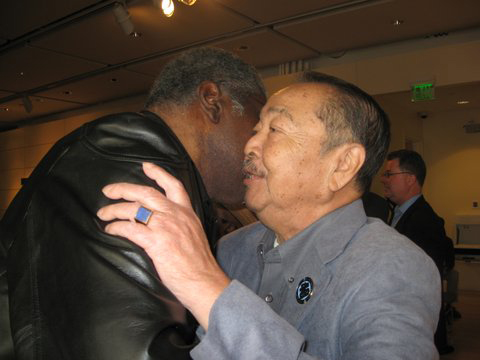 4. How does a FBI agent acquire the super-Jason Bourne-equivalent ideological skills to influence so many radicals both of the ‘60s and continuously to his death, including myself? There is no Cliff Notes or Crash Course FBI Training Academy 101 on Revolutionary Ideology on the nuances of debates on “peaceful transition to socialism as revisionism” or “liberal multi-culturalism as the neo-colonialism within U.S. Third World communities” etc. You get the picture. Richard Aoki intellectually had the brilliance that surpassed any professor of radicalism at any university or college. Could a FBI agent really be this? We see from the FBI agent who helped in the assassination of Mark Clark and Fred Hampton, that he was paid around $200, that he was primarily head of security for the slain Panther leader Fred Hampton, and that he committed suicide ostensibly for the guilt that he had over his role in the murder of Hampton and Clark. There is no evidence of this for Aoki; in fact, Aoki remained a committed revolutionary to the end.

The over-emphasis upon Aoki providing the Panthers their first firearms is sensationalist fodder. What is conveniently ignored is what he contributed most to the Panthers and to the legacy of the U.S. revolutionary movement: promoting revolutionary study, ideology and disciplined organization.

5. The supposed admission that Rosenfeld has on tape is typical Aoki humor in answering “Oh.” The subtext, as Aoki knew he was talking to a reporter, is really: “Oh, you motherfucker, so that’s what he said. Well, stupid, then it must be true!” Rosenfeld notes that Aoki laughs – he is laughing AT Rosenfeld! Anyone who really knew Richard Aoki knows that he used humor often to turn someone’s stupid questions back at them, saying to the effect: Well, if you are stupid enough to think that, then it must be true for you!

6. The corroboration offered by former FBI agent, now turned squealer, Wes Swearingen, is not evidence. Swearingen only thinks that it is likely Aoki was an informer for the FBI because he was Japanese! How stupid! Would fierce Black nationalists accept someone more easily because he was Japanese? If that were so, there would have been more Asians in the Panthers! Yes, Richard personally knew many of the founding Panther members, including Seale and Newton, precisely because these hardcore guys truly trusted Richard because Richard could do the do! Again, the question must be asked, what benefits did the FBI get from having Aoki as an informant to lend credibility to this assertion? At best, Swearingen can only offer speculation and surmise, as he can’t testify that he actually KNEW Aoki to be an agent or witnessed FBI encounters with Aoki. 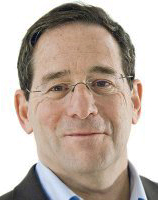 7. The one FBI agent who might have actually encountered Aoki, an agent named Threadgill, now (conveniently) deceased, claimed in mid-1965 he was Aoki’s handler. We have no way of verifying this except by relying upon Rosenfeld’s claims. When Rosenfeld asked Aoki point blank if he knew this guy Threadgill, Aoki flatly denies knowing such a person and jokes about it – again, in the Aoki style: “Oh, if that’s what he claims, and you think it so, then it must be so, stupid!”)

8. Lastly, what is to be gained by this accusation of Aoki as FBI informant, a day before Rosenfeld’s book hits the bookstores? To sell books via this hype and sensationalism. Aoki did more to build the student movement in the Bay Area than many others. Let’s ask the question, how much was Rosenfeld paid for his book deal? We should ask that same question about the late Manning Marable, whose supposition-filled and sloppy “scholarly” account of Malcolm X is equally reprehensible. Besides the obvious gain to Rosenfeld directly of hoping to increase book sales and his wallet, we must ask the larger political question, how does this accusation against the deceased Aoki affect the larger politics of today?

Well, here’s how: It fuels doubt on so many levels to building radical politics, sowing dissension between Black nationalists and Asian American radicals, distrust of our revolutionary leaders of past and present, fear for the police-state and its power to extend itself into the core leadership of revolutionary movements and, as witnessed by Scott Kurashige’s capitulation to the reformist politics of non-violence, to elevating Martin Luther King Jr. above the Black liberationists (Kurashige calls for a re-look and re-examination of MLK, implying this is safer and more amenable than the “violence” advocated by Aoki and the Panthers). And this is simply the tip of an iceberg building to stave off the growth of radicalism generated by the Occupy, eco-socialist and anti-globalization movements both in the U.S. and across the planet.

Here is the initial reaction by most people not cowered or shocked by Rosenfeld’s accusations, who either personally knew Richard Aoki, as I did, or who are accustomed to or familiar with such “dirty tricks” as employed by Rosenfeld: If Aoki was an agent, so what? He surely was a piss-poor one because what he contributed to the movement is enormously greater than anything he could have detracted or derailed. If it is implied that Aoki promoted firearms and violence to the Panthers, well, here’s some news: The Panthers were well on that direction as part of the trajectory set by Malcolm X, Robert F. Williams, the Deacons of Defense, who the Panthers modeled themselves upon, Harriet Tubman, Geronimo, Tucemseh, Crazy Horse and so many others.

And if you are gullible enough to believe these “dirty tricks” – which isn’t surprising given how media hype today is so powerful and influential – and rely upon the internet instead of actual experience in struggle and revolutionary organizing, then you need to get real, get serious and deal with counter-hegemonic consciousness-raising for yourself. But most of us who never were shocked by this accusation towards Richard simply took the attitude, PHUCK THEM – Farrar, Strauss and Giroux; Swearingen, Rosenfeld and anyone who swallows this crap!

Fred Ho is described by Wikipedia as “an American jazz baritone saxophonist, composer, bandleader, playwright, writer and social activist … many of (whose) works fuse the melodies of indigenous and traditional Asian and African musics, which as Ho would say is the music of the majority of the world’s people. He has also co-edited two books: ‘Legacy to Liberation: Politics and Culture of Revolutionary Asian Pacific America’ and ‘Sounding Off! Music as Subversion/ Resistance/ Revolution.’ He has a third book in progress about African Americans and Asians working together in civil rights, which he is co-writing with Purdue University professor of African American studies Bill Mullen.” The Bay View thanks Freedom Archives for alerting us to this story.