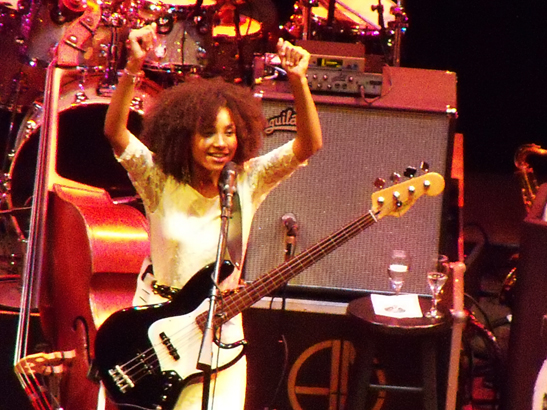 It’s that time of year: winds sweeping across the Pacific from the West Coast of Africa, the spirits of its children buried beneath the currents, descendants spread throughout the world. Marshall Lamm invited me to see Esperanza Spalding. I didn’t know what to expect and was pleasantly surprised when the singer-musician treated her audiences to a socially conscious tour of America with stops at the doors of the prison industrial complex and Mother Nature.

Freedom was a theme, that and human survival. It was Earth Day in Oakland, as it should be every day, what with the recent oil spill in Richmond, Spalding said, as she played a song she composed for the planet’s birthday, April 21, 2012. This particular song had a haunting tone, the musician on electric bass, her countrabass lying on its side nearby.

Accompanied by a dynamic horn section with acoustic and electric keyboards, singers, and of course Spalding on vocals and bass – her Radio Music Society – the evening moved fluidly from a fireside chat on relationships and love to the concluding number, which spoke to Spalding’s philosophy.

I’d been wondering about the giant boom box on the stage.

Spalding could have been speaking about KPOO, KCSM, KPFA, maybe Wanda’s Picks when she talked about the power of music to speak about issues and feelings words might not communicate as well. She had the audience think about times when they were in the car or shower and a jam came on they loved and perhaps didn’t know or catch all the words. She invited everyone to sing their song.

It doesn’t have to be in the right key, she said. The inclusive nature of the closing song fit well with the overall ease that characterized Spalding’s concert.

I’m not 30, she said, when speaking of the man whose life was robbed of 30 years. Snatched off the streets, he spent 30 years behind bars and was released when the witnesses, even jurors recanted their verdict.

Makes one think, she said, about freedom. Don’t take it for granted. She encouraged the audience to get involved in prison abolition. 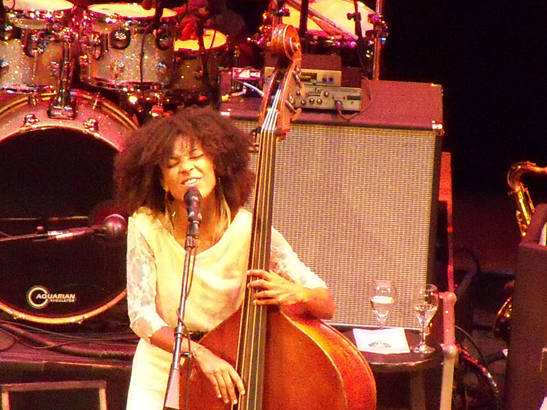 Another moment was her intro to “Black Gold.” Thoughts of Troy Anthony Davis were present, as Trayvon Martin’s name was called by the male singer, who reflected on the negative media surrounding Black men. Spalding, facing him, reminded him of his ancestors and how they survived much worse, and to remember this: If Black people could and did survive enslavement, Jim Crow and separate and unequal legislation for centuries, we will also. Call on your ancestors, she told him, for strength and support during these times and remember, “You are Black gold.”

I thought it interesting that I had in my purse a book of slave narratives edited by Belinda Hurmence called “Before Freedom: 48 Oral Histories of Former North and South Carolina Slaves.” This is a compilation of two earlier collections: “My Folks Don’t Want Me to Talk about Slavery” and “Before Freedom, When I Can Just Remember.”

Hailing from Portland, Oregon, Spalding invited her brother on the stage to perform the encore number, which was about the roses in Oregon. The Pacific Northwest is where I am headed this weekend – Ashland, for the Ashland Shakespeare Festival. There are a lot of great plays there this year, among them, one, “Party People,” looks at the Black Panther Party for Self Defense and is a collaboration between the Festival and UniVerses, an ensemble and theatre from New York. They performed at Geronimo ji jaga’s commemoration at EastSide and at deFremery or Lil Bobby Hutton Park last year.

If Black people could and did survive enslavement, Jim Crow and separate and unequal legislation for centuries, we will also. Call on your ancestors, she told him, for strength and support during these times and remember, “You are Black gold.”

What an intuitive composer and arranger this Spalding artist is (smile). Her song about kings was cute. This was performed during her relationship section of the set and featured one of her two trombonists. He has five children and supports them on a trombonist salary, she stated (smile). The artist also referenced a spiritual king, God, perhaps the one she should have been looking to for guidance all along.

Another song featured Tia Fuller, whom I’d just seen a couple of weeks prior with her band at the San Jose Jazz Festival. I’d forgotten she was a part of Spalding’s band (smile).

Afterward, the artist, who opened SFJAZZ’s fall season with a concert in the Jazz Continuum series, “Esperanza Spalding, 21st Century Superstar,” met her fans, dressed ceremonially in all white. She made her entrance to the lobby down the stairs from the grand tier, accompanied by two burly Black men. Many folks were there to greet her whom I knew from social justice movements, like Makani Themba, Jahaharah Alkebulan Maat and Ericka Huggins.