Redwood City – On Tuesday, Sept. 25, San Mateo’s Board of Supervisors voted to approve $44.2 million in the 2012-2013 budget, ramming through a plan to build a new jail over strong and growing concerns from community members. Over 50 speakers demanded the cancellation of the jail and pointed out the concrete, feasible alternatives that the Board of Supervisors could enact to reduce the county’s jail population, including expanding funding for alternatives based on County Health System recommendations, using new realignment authority to decrease the jailed pretrial population, and passing a resolution not to use local funds for ICE detainers. 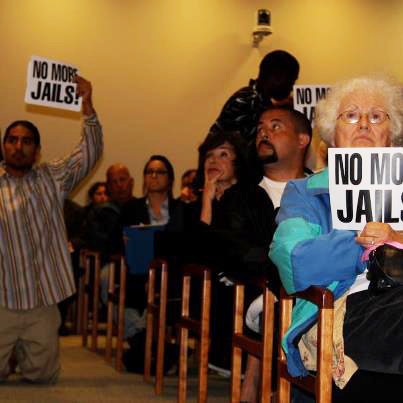 “We know that jails do not work. We also know that probably 60-70 percent of people in these jails are from the poor communities in the county. Communities like ours have a 60-70 percent high school dropout rate. Those are the people that are going to end up in your jails,” said Robert Hoover, program manager for Reentry in East Palo Alto. “It seems worthwhile to spend our time, energy and resources to develop processes that would get us into a mode of prevention instead of incarceration and punishment.”

This week the county cancelled a commissioned study from the Institute for Law and Policy Planning when ILPP began to express strong concerns that building the jail would be a waste and the county should instead work on expanding re-entry programming and cleaning up inter-agency relationships instead. The authors concluded that the county could easily avoid unneeded extra jail beds and “staggering” fiscal burdens by expanding Achieve 180’s caseload and build links between now-competing programs. The introduction to the report concluded that building more jail beds will actually prohibit the improvement of the current system’s deficiencies.

“This is only the latest of expert reports that the Board of Supervisors has turned away from, pretending that they have no other options than to build a jail that will devastate the budget and poor communities in the county. This is only the latest example of the ways in which they have systematically erased dissent on this issue,” says James Lee, resident of Redwood City. Reports from the Center for Criminal and Juvenile Justice, the American Civil Liberties Union, the County Manager’s Office, the County Health System, and the Civil Grand Jury have concluded that the county could easily reduce its jail population if there was political will and that such reductions would eliminate the supposed need for a new jail.

With the jail approved in the budget, residents committed to defeating the jail tax that will be on the November ballot.

Emily Harris, of Californians United for a Responsible Budget (CURB), can be reached at emily@curbprisonspending.org. 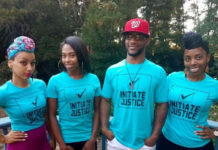