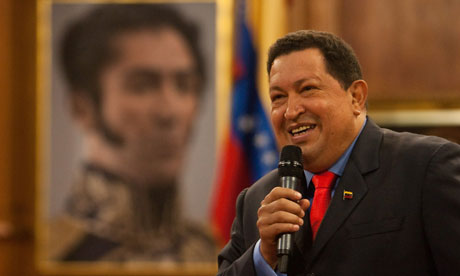 With 54.42 percent of a record-turnout vote, Hugo Chávez has won a fourth term as president of Venezuela, in a race widely recognized as a crucial struggle between the progressive forces of the “Bolivarian Revolution” and the right-wing opposition of U.S.-backed Henrique Capriles. His Democratic Unity coalition (MUD) had hoped to return the wealthy classes – national and foreign – to their former unchallenged status by reversing the social and economic gains of the vast majority of Venezuelans.

Since Hugo Chávez’ first election in 1998, he has led a pro-socialist revolutionary process that has made remarkable gains for the majority of Venezuelans.

Massive support could be seen in a huge rally two days prior to election day, on Friday, Oct. 5, with 3 million people dressed in bright red, who packed seven main avenues of the capital.

Before Chávez’s presidency, Venezuela – with one of the highest oil and natural gas reserves in the world – suffered from deep poverty affecting at least 66 percent of the population. Despite enormous natural and industrial wealth, the two dominant capitalist parties, Copei and Acción Democrática, ran government to benefit both the Venezuelan elite and U.S. and British oil companies.

In 1989, then-president Carlos Andrés Pérez ordered the National Guard and army to repress a mass uprising against sudden fuel and food price hikes, massacring up to 3,000 people in an attack known as “the Caracazo.” Washington did not condemn this massacre by Pérez, nor criticize its “democratic ally” for human rights abuses. 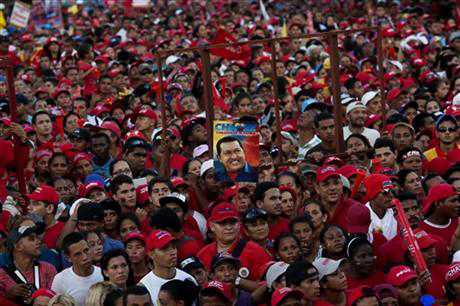 Three years later, when Hugo Chávez – a young military officer – organized a military attack against Pérez, he became nationally famous. His daring action won the hearts of the most oppressed, and propelled him to the presidency in 1998.

The best Venezuela in 200 years

Speaking in the evening before a gigantic multitude of supporters who gathered at the Miraflores presidential palace after the official vote call, Chávez spoke to thank the people, saying: “We dedicate this victory to the women, the students, the workers, the peasants, the Indigenous peoples of our land, to the intellectuals … It is everyone’s victory.

“The next period of government won’t begin Jan. 10 [inauguration day]; the new cycle of the Bolivarian government begins today. We have to do things better, more efficiently, to meet the needs of the people. I repeat, I will be a better president each day.”

He twice made a call to the opposition to join in “national unity and to work for national peace … to not lend themselves to the destabilizing maneuvers that some were carrying out.”

To roaring cheers, Chávez said, “This is the best Venezuela we have had in 200 years. Never before did we have a Venezuela that we have today from a moral, social, political economic and cultural point of view.”

Victory for all Latin America

Messages of congratulations were sent immediately by presidents Rafael Correa of Ecuador, Evo Morales of Bolivia, Cristina Fernández of Argentina and Raúl Castro of Cuba, as soon as the official tally came in.

These leaders acknowledge the enormous importance for the whole continent. Morales said, “It is not only the triumph of the Venezuelan people; it is the triumph of the countries of ALBA (Bolivarian Alliance for the Americas), composed of Antigua and Barbuda, Bolivia, Cuba, Dominica, Ecuador, Nicaragua, Saint Vincent and the Grenadines and Venezuela) and Latin America.”

Castro said: “On behalf of the government and people of Cuba, I congratulate you for this historic triumph, which shows the strength of the Bolivarian Revolution and its unquestionable popular support. … I reiterate to you our unbreakable solidarity and support.”

But more important than Chávez’ percentage of votes is the radical economic and social changes that have come about under what his supporters call the “Bolivarian Revolution.”

The unique development of Venezuela’s new society began with the inspiration that Chávez imparted, as he called for an end to the old COPEI-Acción Democrátic alliance that only made the rich richer and the poor poorer. 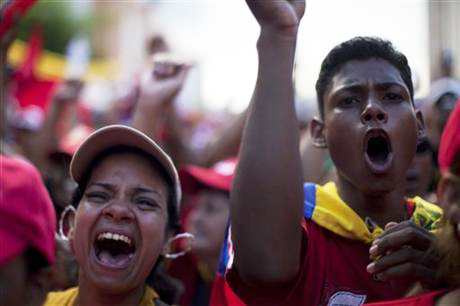 But U.S. imperialism may have had its way in trying to crush the Bolivarian Revolution, if it were not for the Venezuelan masses and Cuba’s support.

The April 2002 fascist coup against Chávez was hatched and financed in Washington. But hundreds of thousands of people poured into the streets, surrounded the Presidential Palace and backed military forces loyal to Chávez.

Never before in Latin America had a president been restored by the people, and so dramatically!

The next blow was the oil sabotage by pro-imperialist management. Heroic efforts restored Venezuela’s oil industry.

Cuba then began to send, in April 2003, what is now more than 15,000 medical doctors to provide free health care to the people. Thousands of teachers were also sent, and soon made Venezuela the second country in the continent to wipe out illiteracy.

U.S. imperialism’s plans are not over

This is not the Latin America of yesterday, when U.S. imperialism was able to expel Cuba from the Organization of American States, invade Dominican Republic in 1965, overthrow Salvador Allende in 1973, defeat the Nicaraguan Revolution and terrorize the people of El Salvador.

Now there is a powerful anti-imperialist alliance of countries that have supported each other’s social development, sharing resources and building solidarity.

In previous elections during Chávez’s presidency, the right-wing opposition has received U.S. advice to abstain, to try to de-legitimize the elections. But that didn’t work.

This time the right-wing opposition tried to form a united coalition with MUD and present Capriles as a youthful opponent to Chávez.

Venezuela’s government and pro-Chávez masses face major challenges. The economic system is still capitalist, even though the oil and other industries are nationalized. The elite and large middle class have not abandoned Venezuela for Miami, like the Cuban capitalists after Batista’s overthrow.

Chávez and the Unified Socialist Party of Venezuela (PSUV) are fighting to build socialism and extend solidarity to others in struggle worldwide. We in the Party for Socialism and Liberation fully support our sisters and brothers of Venezuela in their heroic struggle and for Chávez’s inspiring victory.

Gloria La Riva is U.S. coordinator for the National Committee to Free the Cuban Five and was the 2008 presidential candidate of the Party for Socialism and Liberation. This story first appeared on LiberationNews.org. 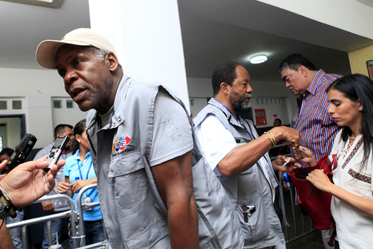 A group of more than 15 representatives from the United States were in Venezuela Sunday to act as international accompaniers during the country’s presidential elections, which proceeded in an environment of calm. Among them was actor Danny Glover, who said: “Congratulations to the people of Venezuela. Job well done.”

“Both sides worked hard,” Glover said. “Any electoral process that creates so much transparency, so much engagement, is important for the Venezuelan people first. That means simply that they have faith that their vote, their voice, means something.”

Also present to witness the voting was James Early, a board member of the Institute for Policy Studies (IPS) in Washington, D.C. According to Early, “Representatives of both candidates … in every instance have said that the process and procedures for voting are transparent and give them the utmost confidence that their choice for president will be cast with understanding, ease and without fear of fraud.”

So much is at stake in Venezuela’s presidential election

The Black mayor of Waterproof, Louisiana, has spent nearly a year behind bars without bail