The Pelican Bay State Prison SHU main reps and Short Corridor Collective who originally called for a peaceful hunger strike in July 2011 to persuade CDCR (California Department of Corrections and Rehabilitation) to meet their five humane demands have recently called for a statewide “end of hostilities” between racial groups that began on Oct. 10. This historic moment not only brought hope to prisoners throughout the state of California in solitary confinement – SHUs and Ad Seg – and in general population in prisons and jails, but it hit the streets too as prisoners’ families and supporters joined organizations, youth and communities in calling for simultaneous unity, including a ceasefire, in the streets. 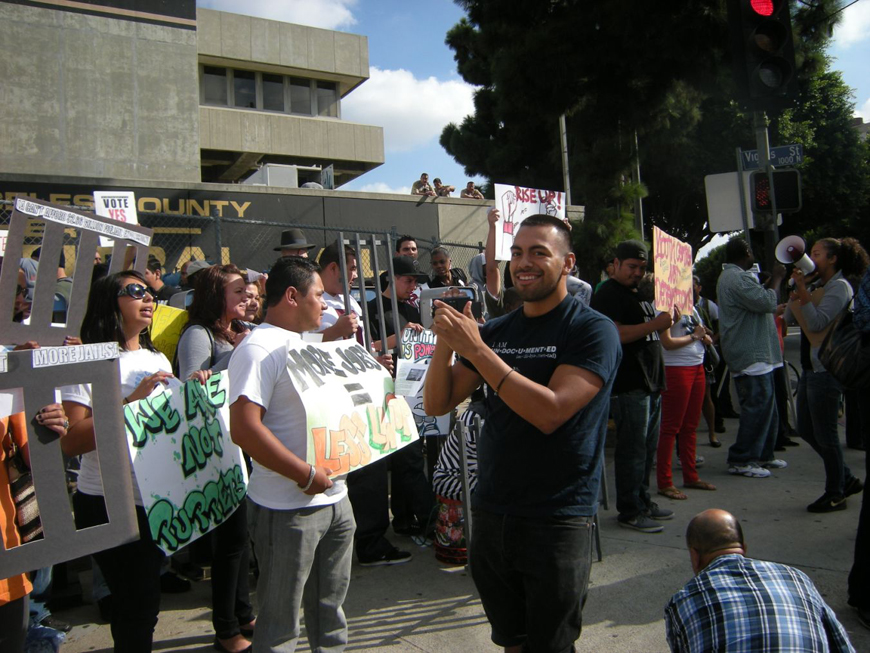 Men in segregation statewide had already been following the example of the Pelican Bay Short Corridor Collective within the last year since the statewide hunger strike began in July 2011. Many men at different prisons had put aside their differences to work as one in unity with other men they weren’t used to getting along with.

I know this because Calipatria State Prison ASU as a whole had put aside their differences in July 2011, and their unity has not been broken. At Corcoran SHU and ASU, Pelican Bay State Prison SHU and Ad Seg and Tehachapi State Prison SHU, many men of different races have put aside their differences to be in unity for the struggle. They are joined by men and women in prisons around the state. It is an amazing accomplishment not only for the main reps and Short Corridor Collective but all those men and women statewide who have been working together for their human rights.

The Pelican Bay State Prison SHU main reps and Short Corridor Collective who originally called for a peaceful hunger strike in July 2011 to persuade CDCR to meet their five humane demands have recently called for a statewide “end of hostilities” between racial groups that began on Oct. 10.

The end of hostilities agreement surprisingly caused a bit of confusion for some, however. There were hunger strikes at Pelican Bay, Tehachapi and Corcoran that started on or around Oct. 10. I started to receive letters from prisoners around the state who were unsure whether hostilities were to end within their own racial group or between groups, some questioned whether the third point in the agreement meant another statewide hunger strike, some were swayed away by articles calling the agreement a “peace treaty,” while others were inspired by the word “peace.” But all of them support the agreement to end hostilities.

Some men asked me if they could get clarification from the main reps at Pelican Bay. Heshima Denham at Corcoran SHU wrote: “We received the comments (from several different sources) on the 10/10 cessation of hostilities and are in FULL adherence/compliance with all three points. However, there does seem to be some confusion on aspects of point 3 as it relates to the 10/10/2012 date, and we were wondering could we get some clarity from the main reps at PB?”

Gustavo Chavez from PBSP SHU wrote to me on Sept. 26: “The idea of this agreement going around is a positive start to a new beginning for all inmates. If we could maintain this valuable peace treaty within the prison system, why not work on spreading the word outside the prison walls so that we may put an end to the gang violence and work on becoming a bigger force?”

Though I was not able to attend the rally on Oct. 10 led by the Los Angeles Youth Justice Coalition for a “parallel cease fire in the streets” to correspond to the end of hostilities inside the prison, I heard from others who were there and the pictures show it was a historic event. Led by the youth, a large, diverse crowd rallied at 10 a.m. outside the LA County Men’s Jail. Other organizations that showed up in unity with the Youth Justice Coalition included the Fair Chance Project, LA Community Action Network, FACTS (Families to Amend California Three Strikes), California Families to Abolish Solitary Confinement, Homies Unidos, California Faith Action, Coalition to Stop Sheriff Violence and Gender Justice LA.

This historic moment not only brought hope to prisoners throughout the state of California in solitary confinement – SHUs and Ad Seg – and in general population in prisons and jails, but it hit the streets too as prisoners’ families and supporters joined organizations, youth and communities in calling for simultaneous unity, including a ceasefire, in the streets.

I was able to go to the National Day of Protest to Stop Mass Incarceration in Los Angeles on Oct. 22, and the scene of more than 500 young people from the Black Riders, the Youth Justice Coalition and many more groups filling the streets of Los Angeles as they marched in unity, their voices booming for all to hear, was pretty damn amazing.

Statements were issued by CDCR that prisoners at Corcoran and Tehachapi began hunger striking on Oct. 10 against the security threat group (STG) policy, and I learned that Pelican Bay Ad Seg was hunger striking for the five core demands. The STG policy is CDCR’s response to the prisoners’ five demands but does NOT meet them, so the two go hand in hand. All the prisoners I’ve heard from soundly reject the STG policy.

The LA Times reported on the three hunger strikes that began on Oct. 10, the day the end of hostilities agreement took effect – the ones at Tehachapi and Corcoran lasting longer than the one at Pelican Bay. Later, CDCR reported all the hunger strikes had ended and the men had resumed eating. No prisoners’ families were informed about the hunger strikes, so far as I know. 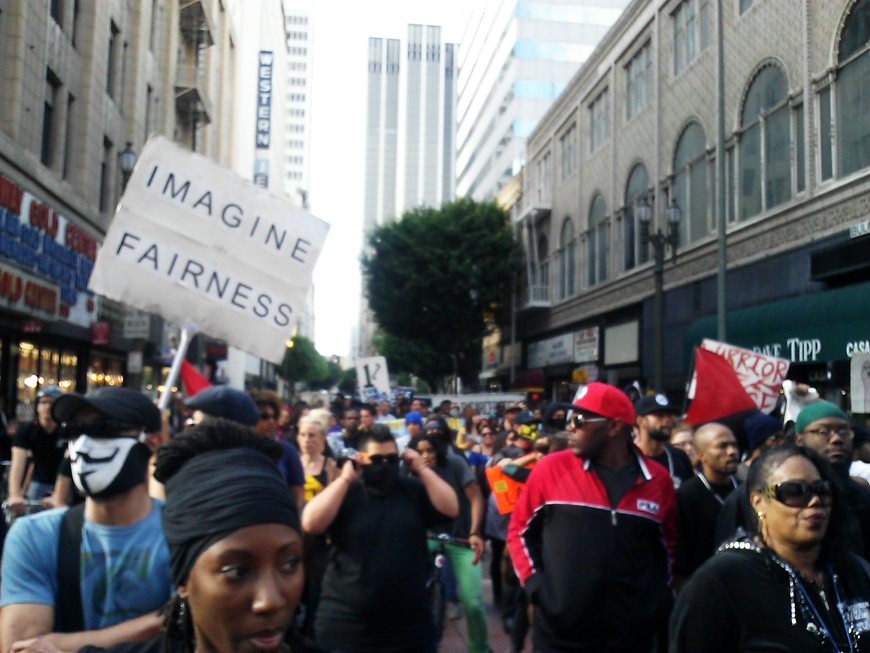 I received a letter from Pelican Bay Ad Seg from a validated inmate who is being held there until a SHU cell opens up, writing about their Oct. 10 hunger strike: “As of today, we are currently on a hunger strike as you may be aware of. This morning after refusing our meals the COs (correctional officers) came to remove any food in our cells, and our TVs. Talk about retaliation, huh? We’re being disciplined already for our peaceful protest. Some cells were cell-extracted for refusing to relinquish their TVs. Do you happen to know if PBSP is the only prison partaking in a hunger strike for the 5 core demands?”

Another prisoner there reported in an Oct. 23 letter: “Apparently, fellas around here were confused and may have misconstrued the peace agreement as a hunger strike in motion. After no news, we turned this into our favor here in Ad Seg and addressed what’s wrong and got it corrected. This was a few days long and resulted with a full belly. Our TVs were returned too!”

On Sept. 19, I heard from a friend in the Tehachapi SHU: “Things are as expected around here. Not much we can do but wait on the fellas up north to decide what our next plan of action is. I think if more resistance is needed, everyone going single cell would be more productive. These cops can let us starve ourselves and no big deal. But when we rob them of bed space they don’t have, they will be forced to compromise. “

People in prisons and on the streets don’t need to hold hands in “peace” nor does anyone need to be friends with someone of another race if they don’t want to for the end of hostilities agreement to work. We just need to put aside our differences and unify for the struggle. Whether committing to end hostilities is called a “peace treaty” or “unity,” I can personally attest that what’s starting to grow is a powerful force of strong minded individuals putting aside their differences with one another and standing up against the system to take back what’s rightfully theirs as human beings: their human rights!

Kendra Castaneda is a prisoner human rights advocate whose husband, Robbie Riva, T-49359, is being tortured in segregation at Calipatria State Prison ASU. She can be reached at kendracastaneda55@gmail.com.