For decades, the Oakland Police Department (OPD) has been the focus of fear.

Fear because the agency, which years ago recruited heavily from the South, had people on staff who used their office to further their hatred of Blacks in a long and bitter habit of repression and violence.

For a brief time, the Black Panther Party put a crimp into their strut, as it became a local, and then national, presence of resistance to their repeated assaults on Black Oaklanders.

But the Black Panther Party is no more, and the repression has come surging back.

The family of Alan Blueford know that reality all too well, for on May 6, 2012, the 18-year-old was shot and killed by the OPD’s Miguel Masso.

Alan was one of countless youngsters forced to submit to the outrageous “stop and frisk” tactics. Alan, rightly, was afraid of such contact and, following his instincts, took flight.

Masso chased him. Masso killed him.

Now, the parents of Alan, Adam and Jeralynn Blueford, are demanding answers; and all they’re getting is lies.

The story of what happened has changed at least half a dozen times, and Oakland’s political officials have promised much and delivered nothing.

For, forced to support those who voted for them and the OPD, they invariably opt for the latter. Thus, from the people who are sworn to represent them, they get evasion – or worse, silence.

For the OPD has money and power – and when have you seen any politicians turn their backs on this combination?

As for the family, they continue to organize resistance to this campaign of repression.

You can join that campaign at justice4alanblueford.org.

Mumia Abu-Jamal met with Jeralynn Blueford and Adam Blueford, the parents of Alan Blueford, when they traveled to Pennsylvania on Oct. 29 to build support for justice for their son, Alan. The African-American youth was killed by Miguel Masso of the Oakland Police Department in California on May 6. 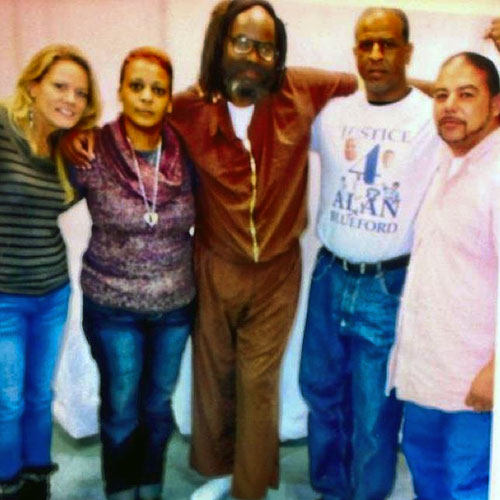 The Bluefords traveled with Jack Bryson, who got involved in the struggle against police repression when Oscar Grant, another African-American youth, was killed on a Bay Area Rapid Transit platform there by the BART police in 2009. Bryson’s two sons were on the platform with Grant when he was killed.

The visit was organized by Sandra Jones, a death-penalty abolitionist and assistant professor of sociology at Rowan University in Glassboro, N.J.

Workers World spoke with the Bluefords, Bryson and Jones about the visit with Abu-Jamal, long-time political prisoner, award-winning journalist and former death-row inmate in Pennsylvania.

Workers World: Why did you want to meet with Mumia?

Jack Bryson: I read all his books and look at him as the Messiah of the movement. In thinking about everything he has been through, who better to comfort and advise the Bluefords?

Jeralynn Blueford: I read up on his case. He experienced what I’ve been going through to the tenth power.

Adam Blueford: I knew he’s been struggling for justice for many years. Through our struggle, I thought I could learn something from him.

WW: What impressed you most about Mumia?

A. Blueford: His heart. He was such a pleasant individual, and me being a religious person, him saying “God is love” is something I brought home with me. His knowledge and his willingness to help.

J. Blueford: His calming and soothing presence, coupled with his intelligence and strength.

Bryson: He talked about how he loved Huey Newton, the Black Panther Party and Oakland.

Sandra Jones: The ease at which he was able to go back and forth between commentary about politics, discussion of Obama to personal confirmation about himself and attention to Jack and the Blue¬fords. At this point, he has been in general population for less than a year. He had been in solitary for so long.

WW: What advice did Mumia offer about winning justice for Alan Blueford?

Jones: [Mumia suggested] creating a website “killer-cops.com.” He thought it would be controversial to have that name, but it would draw attention. He mentioned that all the victims could be listed and have a central place to build the movement.

A. Blueford: Mumia said that justice is never given; it’s fought for. Not violently, but through education and movements, like the JAB [Justice for Alan Blueford Coalition], which we’re attempting to build.

WW: What did Mumia share about his own case and situation?

Jones: He spoke about being able to have contact with other prisoners. [He] told about one young prisoner who told him he didn’t “do books.” He now “does books,” and Mumia is educating other young prisoners. He’s able to spend time with Eddie Africa of the Move 9. Eddie has been alone most of the time he’s been in prison.

Bryson: When asked, “How do you do this? You’re innocent and [have been] kidnapped?” He said every day he is alive is a victory.

WW: Is there anything JAB can do for Mumia?

A. Blueford: We want to make sure the injustice done to Mumia is not ever swept under the rug, that this movement we’re building will eventually get justice for Mumia and walk him out of the doors of that penitentiary.

Bryson: We should write to him and continue to spread international support for him.

Bryson: When [Mumia] was 14, he was arrested in Oakland for supporting Huey [Newton]. He talked about Oscar Grant, Kevin Cooper in San Quentin, Troy Davis and Tookie Williams.

A. Blueford: Mumia really showed us a lot of love. It was like meeting a family member. … We talked, laughed, hugged, cried – like family.

Terry Kay is a Bay Area writer who has written extensively on the Alan Blueford case for Workers World, where this story first appeared.