by Amir Khalid A. Samad, Peace in the Hood 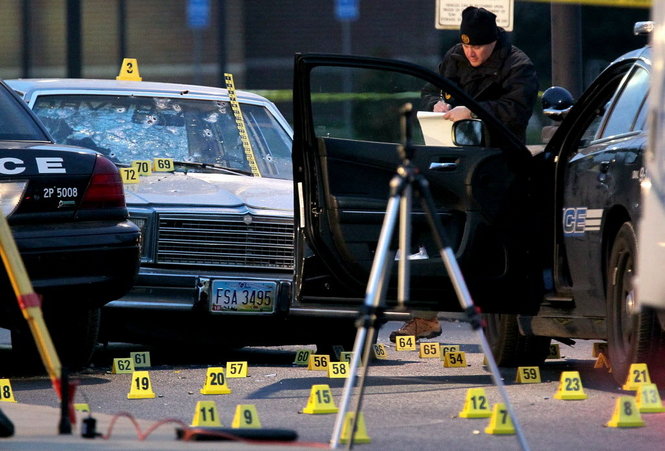 The Task Force for Community Mobilization in conjunction and collaboration with several human and civil rights organizations is sending a request to the United States Department of Justice and its Civil Rights Division to conduct a thorough investigation of the city of Cleveland’s Safety Department and Police Division.

There is a sense of urgency considering the fact that a horrific shooting on Nov. 29 – in which 137 shots were fired – resulted in the death of two unarmed African Americans, Malissa Williams, 30, and Timothy Russell, 43. This may be the worst example of excessive use of deadly force in the history of the United States. The fact that 12 of the 13 police officers were white and the victims were Black in a city which has an almost 70 percent minority population is a crisis.

Williams and Russell “were killed after a 26-minute high-speed chase that began at the Justice Center in Cleveland and ended in East Cleveland, where officers fired 137 shots at the car Russell was driving. Russell was struck 23 times, while Williams was struck 24,” reports Cleveland’s daily newspaper, The Plain Dealer. Cleveland police say they started the chase when they thought they heard a gunshot coming from Russell’s car at about 10:30 p.m. on Thursday, Nov. 29. East Cleveland police say Cleveland PD dispatchers determined during the chase that Russell owned the car.

“(N)o gun was found in the car,” according to The Plain Dealer. “Chatter on the police radio during the chase included the possibility a weapon was seen and thrown from Russell’s car, East Cleveland Police Chief Ralph Spotts said.

“So, it appears that two unarmed people were gunned down in what the police union official calls a ‘good shooting,’” noted activists in a news release issued at a press conference and rally on Dec. 3.

“Williams’ aunt, Dorothy Sigelmier, said in a phone interview that she helped raise her niece, whom she described as having mental disorders,” The Plain Dealer reports. “She was a good girl. She wouldn’t have had a gun. She didn’t even know how to use a gun.”

Timothy Russell’s father said his son “was a good boy,” according to The Plain Dealer. “I wouldn’t believe he would have a gun, not even a knife,” David Russell said.

To add insult to injury, “The bodies remained in the car, which had been encased in shrink wrap to preserve the evidence, until it was towed from the scene by the medical examiner’s office about 9:30 a.m. Friday,” The Plain Dealer reports. 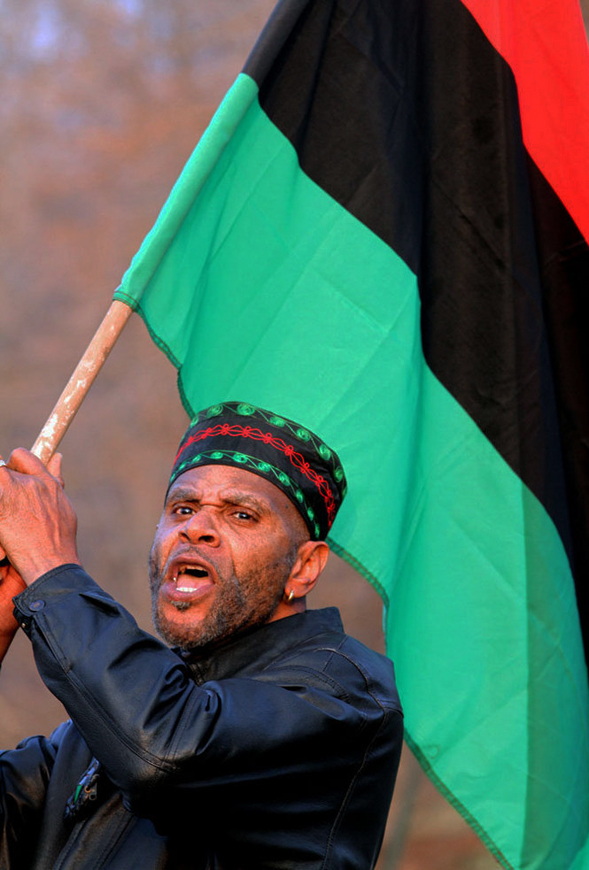 All law enforcement and safety employees must be held accountable for the protection of the human and civil rights of all citizens. There has been a pattern of excessive force, police misconduct as well as a myriad of complaints by citizens in regards to abuse and discrimination in the criminal justice system in this county.

We are calling on the United States Justice Department to institute strong, fair and common sense measures that result in a safer city and community. Employees of the public safety divisions should not assume the role of police, detectives, prosecutors, judge, jury, prison guard and executioner all at the same time!

In addition, it has come to our attention that millions of dollars for violence, crime and gang prevention has been misdirected to agencies that have proven to be ineffective and nonproductive in terms of outcomes and community perception. This must be investigated!

Several years ago community leaders and public officials concluded that there was a pattern of police misconduct and excessive force as well as civil rights violations in the city of Cleveland. How is it that given the history of the city of Cleveland we have a white police chief and safety director? How is it in a city that is 70 percent minority we have this racial disproportionality in public safety and law enforcement employees! We must also look at the religious and ethnic makeup of paid employees in public safety, as well as other departments in the city of Cleveland.

The Plain Dealer, too, is critical of Cleveland’s history of police misconduct, reporting that “a review of court records and Plain Dealer examinations in the past few years show a department that has been in the spotlight for the way it uses force and investigates it.

“The figures involving investigations of use of force have dramatically favored officers. All of the 4,427 investigations by supervisors from Jan. 1, 2003, through Sept. 9, 2006, ended in the officers’ favor, The Plain Dealer reported in 2007.

“Other figures suggest a troubling trend.

“Between October 2005 and March 2011, Cleveland police chose Tasers to gain control of struggling suspects 969 times, according to a newspaper analysis. During that time, police supervisors found the use of the electrical shock device to be appropriate in all but five of the cases they reviewed. Criminal justice experts said the clearance rate strained credibility.

“The use of excessive force has come with a cost, as the city has paid out millions of dollars to the families of victims in the past several years.”

In closing, it is also a contradiction in the African American community where high profile tragedies such as this will motivate religious leaders, elected officials and other so-called shot callers to be visible when the issue is “race related.” However, when Black on Black violence, crime, murder and other tragedies happen, these so-called leaders are missing in action and nowhere to be found.

They will be in the board room to serve as buffers, gatekeepers, representing white corporate and philanthropic interests in Black Face. They proudly serve as a pacification team. It is evident that class is a factor in this crisis as well, and we hope and pray that an authentic dialogue can take place in our community.

Amir Khalid A. Samad is CEO of Coalition for A Better Life, dba Peace in the Hood, Inc. Contact him at Peace In The Hood Community Page on Facebook. Bay View staff contributed to this report. 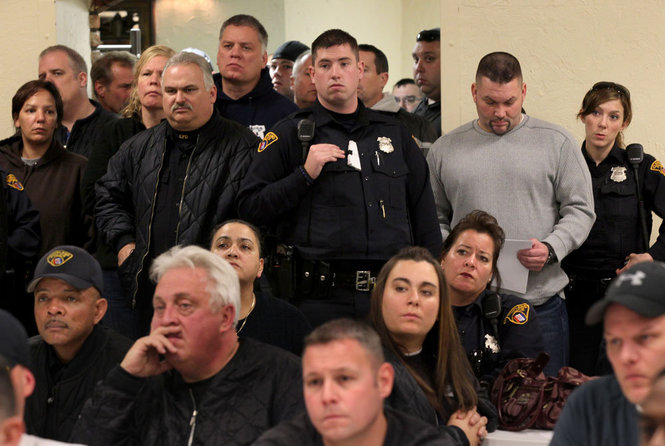 Mr. Holder, we are writing this request urging the Department of Justice Civil Rights Division to act quickly in investigating the Cleveland Department of Public Safety and CPD in regards to the recent horrific shooting of two unarmed African-American citizens by the CPD. There were 137 shots fired, including shotgun blasts, that were unnecessary and excessively fired into a vehicle after a reckless high speed pursuit. We have concluded this was probably the worst use of unnecessary and excessive use of force in a police shooting in U.S. history!

This incident also appeared to be “racially motivated” and carried out in a discriminatory way considering the victims were Black and 12 of the 13 officers involved were white and one was Hispanic. All law enforcement agencies must be held accountable for protecting the human and civil rights of all citizens.

It is clear to us that 12 Black police officers would never have fired 137 shots into a vehicle driven by white citizens who were suspects. In addition, it is clear that police supervisors would never have allowed 12 Black officers to engage in a reckless pursuit chasing white suspects who had not fired any shots nor were found not to possess any weapons. This must be taken into consideration when discussion is required to institute strong oversight and common sense measures that will result in greater sensitivity training and supervision over police operations.

The question must be raised as to why most citizens would never consider that African-American officers would chase two white citizens who were suspects in a police pursuit in the same manner that these white officers pursued these suspects. In addition it is clear that rage and hysteria were displayed by the officers and the “abuse of two corpses and excessive violence” were exhibited.

Several years ago community leaders, citizens and public officials concluded that the Cleveland Police Department had a pattern and practice of excessive force, civil rights violations and bias involving people of color. Regardless of whether or not it is intentional, unconscious or institutional, this must be addressed.

Finally we urge the Department of Justice and its Civil Rights Division to be thorough in their investigation and to ensure that the findings and standards include strong oversight provisions. The standards will be meaningless unless they are monitored and enforced by independent outside agencies. We can no longer rely on the police to police themselves.