It’s like something ripped right out of a dystopian futuristic sci-fi novel: A U.S. patent has been uncovered that describes electronic handcuffs capable of delivering torturous electroshocks, “gas injections” and injectable “chemical restraints” to prisoners who wear them. The cuffs can be remote-controlled by prison guards, cops or MPs to deliver stronger or weaker electroshocks as desired… or even chemical injections. 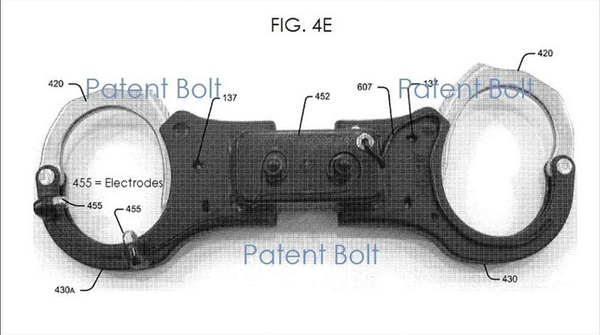 The device is described in U.S. patent application number 20120298119, and the three people behind its invention are Corbin Reese of Scottsdale, Ariz., Donald L.Pegg of Chandler, Ariz., and Lucius L. Lockwood of Phoenix, Ariz.

The handcuffs are able to deliver electroshock torture in combination with RFID chips that determine the distance between prisoners and weapons or other objects. If the prisoner wearing the cuffs approaches too closely to an RFID-equipped object, they are electro-shocked.

As the patent describes, “if a weapon is equipped with an RFID or other identification device, sensors in the restraining device may transmit a signal and receive a response signal indicating that a weapon is in a predetermined proximity, and if the detainee does not move away from the weapon to cause the response signal to fall below a predetermined threshold, a shock will be administered.”

If you fail to verbally acknowledge, you will be electroshocked

The cuffs can also be configured to deliver electroshocks to prisoners upon their failure to verbally acknowledge something. As described in the patent: “In yet another embodiment, an unauthorized activity occurs when the detainee fails to provide a predetermined verbal acknowledgement.”

If you do not answer, “Yes, sir!” in other words, you will be tortured for your silence.

It’s not enough to merely electroshock torture prisoners who are wearing these cuffs, by the way. The invention also includes microscopic needles and a “gas injection system” to inject the prisoner with whatever drugs or chemicals the government desires.

Can you get any more police state than this?

Natural News has learned that the inventors of these electroshock torture handcuffs are the same people involved in the manufacture and marketing of S&M sex toy handcuffs. As their home page explains, Fun Cuffs are electroshock sex toys that deliver “naughty” shocks to whatever perverted sex partner you might be toying with at the moment.

As their website explains: “Fun Cuffs is a revolutionary product that combines traditional handcuffs with the ability to remotely shock the person wearing the Fun Cuffs. The level of shock can be adjusted on the remote from “nice” to “naughty.” The Fun Cuffs are rechargeable so they are long lasting, allowing more time to enjoy the excitement they will bring to your play.”

In case Fun Cuffs changes their home page (which they will after this story goes viral), we have captured an image of their home page, taken on Dec. 12, 2012. Click here to view it.

If you put these electroshock torture devices into the hands of today’s sociopathic law enforcers, it creates the perfect recipe for cruel and unusual punishment of victims who have merely been handcuffed and may not be guilty of any crime whatsoever.

In California, the raw milk man James Stewart was shackled by LA County Jail goons who chained Stewart’s arms and legs together, then left him in a cold, isolated cell to suffer from hypothermia. This was all part of an effort to get Stewart to relent and give in to a plea bargain – which he eventually did, in order to save his own life.

Had LA County Jail guards been given access to these new patented “electroshock torture handcuffs,” they would no doubt have enjoyed a few rounds of delivering painful shocks to Stewart’s body as they remote controlled the device.

This is the problem with the introduction of new torture technologies into a police state society that utterly lacks ethics, morals and compassion. The United States government no longer even follows law! Instead of the devices being used for the purpose of protecting citizens’ rights as guaranteed under the U.S. Bill of Rights, they will be used as entertainment devices for police state goons to “get their kicks” by torturing prisoners.

Mike Adams, known as the Health Ranger, is the editor of NaturalNews.com, where this story first appeared. To view the complete patent application for electroshock handcuffs and all its claims, go to the U.S. Patent & Trademark Office.