A common denominator among individuals who commit suicide is a traumatic event and/or long-term torment which can result in psychosis. If left untreated, it can lead to suicidal thoughts with the intent to end the internal distress and anguish. This same diagnostic assessment is equally applicable to mass suicide. 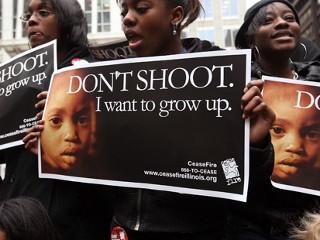 I believe that we as a people are trying to commit mass suicide by proxy, and we live in a society, a world, that is only too willing to provide us with all the means to facilitate our collective unconscious suicidal aspirations. I realize that many of you will no doubt vehemently challenge my hypothesis. I myself was initially reluctant to accept my own thesis, but our day to day reality confirms it.

Before I expound on my thesis, allow me to briefly distract you and direct your attention to an observation I believe is very pertinent towards affirming its validity.

When the Jews came out of their Holocaust, they pledged NEVER AGAIN! The state of Israel is indicative of that pledge, and one societal aspect that both resonates and epitomizes that pledge more than anything else is their law of conscription. Every Jewish citizen, when he or she turns 18, must join and serve at least two years in the armed forces, creating a people and society that is armed with both the skill and means to defend itself.

But when we as a people came out of our Holocaust – i.e., genocidal slavery and Jim Crow – our pledge was not NEVER AGAIN. We pledged to participate in our own genocide via integration, assimilation and acculturation before we could even fully recover, while the Jews’ priority was to restore their national and racial identity and consolidate their forces before they decided to integrate within the global community.

I believe that we as a people are trying to commit mass suicide by proxy, and we live in a society, a world, that is only too willing to provide us with all the means to facilitate our collective unconscious suicidal aspirations.

In contrast, our priority was to completely surrender both our racial and national identity without restoring our original Afrikan psyche. For the most part we as a people did not make that pledge, NEVER AGAIN. We pledged to sacrifice everything innately Afrikan-centric to become an offspring of a Euro-centric construct with a DNA to serve others while blindly determined to destroy ourselves. Our social reality tends to substantiate this observation.

My people, we should have pledged NEVER AGAIN! And not, can I sit on the front of your bus, or sit at your lunch counter, or participate in your corrupted political system! And we’re still wondering why we find ourselves trapped in this constant cycle of poverty and death? You may ask: What does this have to do with my hypothesis of our collective suicidal ambitions?

Well, I can identify many visible symptoms that would illuminate explicit signs of mass suicide, but I will use this opportunity to briefly explicate the most proliferated and transparent symptom of mass suicide that even the most stoic skeptics cannot deny. I realize many of our people may find the tendency to amalgamate the external with the internal – i.e., the genocide with the suicide – which I agree is critical towards comprehending the totality of the reality of our situation, but what is equally imperative is identifying our contribution: Our unconscious suicidal aspirations complement the White supremacist conscious aspirations to commit genocide on our race.

As I previously stated, there are a number of symptoms that we can identify that would support my hypothesis of our collective participation in our mass suicide attempt, but I will identify only the three that permeate our communities the most. The leading causes of death that we have complete control over are 1) Black-on-Black gang violence, 2) heart disease, and 3) HIV/AIDS – all symptomatic of a race trying to commit suicide. (Note, I did not neglect the impact abortion is having on the rapid reduction of our population. I wanted to use this opportunity to focus on the above-listed three.)

I agree that there exist a number of collateral symptoms that are equally conducive towards both our unconscious suicidal aspirations and the conscious genocidal agenda that we have been subjugated to since our forced arrival upon these shores as Afrikan slaves. For example, the mass incarceration of our people, our inability to defend ourselves against racial violence and oppression, the mass unemployment, an ineffective school system, the absence of New Afrikan fathers in many homes. All these elements deserve to be identified as symptoms, but the theme of this thesis is the three primary symptoms that contribute to thousands of New Afrikan/Black deaths annually.

One of my comrades asked am I implying that our people are unconsciously suicidal by nature? I told him not by nature, but by orientation. We have become unconsciously suicidal, a psychosis directly associated to our historical miscarriage – i.e., the Black Holocaust – a generational psychosis that for the most part has been left untreated. As a result we have developed an inherent collective propensity for engaging in self-destructive behavior with little to no discernment of its devastating ramifications.

The leading causes of death that we have complete control over are 1) Black-on-Black gang violence, 2) heart disease, and 3) HIV/AIDS – all symptomatic of a race trying to commit suicide.

We are killing ourselves at an alarming rate, and it appears that we have become completely anesthetized to the harsh reality of our situation, relishing in our own extinction, because despite the obvious symptoms of a suicidal fate, we continue to move forward ever more destructive to ourselves and community with each passing year. Black death is cheap, not only in Amerikkka but globally.

My people, I tend to direct my words primarily to our people and community. I believe too often we speak about how we are treated as people – and rightfully so – but our suffering will only end when we take responsibility for how we respond to our oppression. The key to our success lies within our collective ability to aggressively but strategically respond to any external threat and/or internal turmoil, from unemployment to pig brutality.

Are my words falling on deaf ears? I must ask: Is slicing our wrist any different from having unprotected sex? Is jumping off a bridge any different from consuming large amounts of salt and fatty foods daily in spite of our high blood pressure and high cholesterol? Is Black-on-Black gang violence any different from putting a gun to our head and pulling the damn trigger?

Our unconscious suicidal aspirations are but a manifested symptom of a psychosis that was born out of 400 years of racial persecution. But is there a cure? My beloved people, as your New Afrikan legal combatant, I am here to tell you that there is a cure for this psychosis – for it dwells within the spirit of Harriet Tubman, Nat Turner, David Walker, Denmark Vesey, Sojourner Truth, Ida B. Wells, George Jackson, Bunchy Carter, Assata Shakur, Nehanda Abiodun.

The power lies with us to put an end to our self-destructive behavior and effectively resist the forces of oppression.

The cure equally lies within our Afrikan-centric roots, the unity and support for one another, the unconditional love for ourselves and our people. I sincerely invite you to drink of this cup of resistance, Black Power and Black Natural Beauty!