Leo Robinson was a Black leader of the longshore union in San Francisco. He died in mid-January. For many of us, he was a lifelong companion, an example of what being an internationalist and a working class activist was all about. 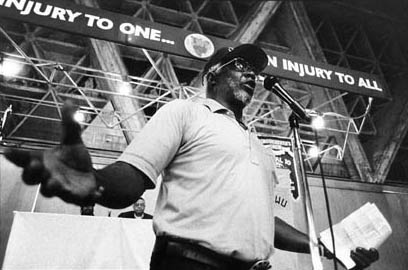 Leo Robinson came into the International Longshore and Warehouse Union because of a deal made by Harry Bridges and the Communists, who led the waterfront strike of 1934. That strike metastasized and became a three-day general strike after cops shot and killed three strikers. It was the birth of the ILWU and changed the political history of the West Coast.

The radical leaders on the docks were both Black and white. But the bosses who controlled the jobs on the waterfront always showed preference for the white gangs. Black crews got the worst jobs, when they were hired to unload ships at all. All workers on the docks were hungry, poor and desperate for work. But Black dockers were the hungriest of all.

Everyone was hired in a shapeup every morning and had to beg a job from the bosses. Longshoremen were considered bums. As the strike went on, the gang bosses began looking for men who would cross the mass picket lines and start taking cargo off the waiting ships. The strike leaders went out into the neighborhoods of Black workers and made a promise.

The union, they said, was fighting to end the control over jobs by the gang bosses. It demanded a hiring hall the workers would run, where no one would pay for a job or beg work from a foreman. If Black workers would support the strike, African Americans would get jobs like anyone else, and the color lines would come down.

The union won the strike and the promise was kept. The ILWU in the Bay Area became an integrated union with powerful, articulate Black leaders. Some of them became heavyweights in San Francisco politics, where they broke the color line as well. In the city’s African American neighborhoods, longshoremen – and eventually longshorewomen – were respected, raised families, sent their kids to college.

That was quite a step up. From bums on the waterfront, dockworkers became crane drivers – some of the best-paid workers in the San Francisco Bay Area. The union held real political power.

Leo Robinson was a Black leader of the longshore union in San Francisco. For many of us, he was a lifelong companion, an example of what being an internationalist and a working class activist was all about.

Eventually Local 10, the longshore union for Northern California, became a union with a mostly-Black membership. It was more than a source of good jobs; it was an institution that brought power to the community. And as waterfront work went across the Bay, from San Francisco to the Port of Oakland, the longshore workers of Oakland’s Black community had those same good jobs, ones their children and neighbors aspired to.

That’s where Leo lived – on the border between North and West Oakland. That’s where I grew up. I didn’t know Leo as a kid, but I knew the schools his children went to, the streets where they hung out and the language they spoke.

I got to know Leo when he became a leader of the Coalition of Black Trade Unionists. With Geraldine Johnson and David Stewart, they used the CBTU to try to reach into other Bay Area unions and encourage the same kind of progressive politics they knew in Local 10.

Local 10, the longshore union for Northern California, was more than a source of good jobs; it was an institution that brought power to the community.

This was the 1970s, an era when apartheid rode high in South Africa, the years of the Sharpville Massacre, passbook laws and the banning of the African National Congress, the South African Communist Party and the South African Congress of Trade Unions. But it was also the era of the Cold War. The ANC, the SACP and the SACTU were all called terrorist organizations by our government, accused of taking help from the Soviet Union.

Red batiting didn’t stop Leo, David and Geraldine. They saw a connection between Oakland and Johannesburg. They believed that Black people would not be free in the U.S. if they were not free in South Africa and were determined to end the support given by the U.S. government that kept the apartheid regime alive.

Leo knew that workers in both countries had the potential power to break that tie. If longshoremen in San Francisco could find a way to support Black workers in South Africa, it would help the liberation movement there survive and win. At the same time, they would change the conditions for Black workers here at home.

Their work began when the anti-apartheid movement was still small.

They believed that Black people would not be free in the U.S. if they were not free in South Africa and were determined to end the support given by the U.S. government that kept the apartheid regime alive.

Together with other labor activists, they brought leaders of SACTU to the Bay Area when the hierarchy of the AFL-CIO, then still under the influence of the cold warriors, refused to support them.

One of the first things I learned about Leo was that he was not afraid of being called a Red. He took pride in it. “When some people insult you and call you a Red,” he said, “that’s when you know you’re really doing good work. When you’re hurting the racists, that’s their weapon of choice.”

He was a tremendous speaker. The best photograph I ever took of Leo was while he was talking in a union meeting about safety conditions on the docks. He had the full attention of every union member in Local 10’s cavernous waterfront union hall. Leo was an agitator, but people listened to him because what he said made sense to them. He knew how to speak their language.

In 1984 Local 10, the clerks union Local 34 and members of the Inland Boatman’s Union together refused to unload the Nedlloyd Kimberley, a ship from South Africa docked in San Francisco Bay. For 11 days, they defied the threats of the ship owners. They didn’t just take advantage of a technicality in their contract allowing them to respect outside picket lines. They used the power they’d won in the hiring hall, dispatching members to unload the ship who would refuse to do the work when they arrived on the pier. Local 10 members risked their union for a principle, something the ship owners here have never forgotten – or forgiven.

Leo was a leader of that action. The ship boycott was ended under the threat of a federal injunction. But then the hundreds of union and community activists who’d turned out to demonstrate every day on the docks moved their picket line to Oakland. There they demonstrated against the Pacific Maritime Association, the ship owners, every day for two years.

Leo was an agitator, but people listened to him because what he said made sense to them. He knew how to speak their language.

That was the real birth of the anti-apartheid movement in Northern California. Eventually the ship owners could no longer bring South African cargo into any port on the West Coast. Cities like Oakland and San Francisco divested from companies with South African operations. And when apartheid fell, Nelson Mandela came to Oakland and acknowledged what Leo, CBTU, the ILWU and our Free South Africa Movement had fought for through the years.

I was chair of the Bay Area Free South Africa Labor Committee for many of those years. I worked with Leo and helped build a relationship between the ILWU and South African unions, especially the Congress of South African Trade Unions in a liberated South Africa. Those ties and that international perspective is part of the life of the ILWU today, part of the legacy Leo leaves behind him.

Leo’s political commitments extended beyond South Africa. He worked for an end to the wars in Iraq and Afghanistan. He protested police brutality in the Oakland where he lived for many years. He defended the union he loved and unions and workers everywhere.

Most important, Leo Robinson believed in immediate changes because they are steps to a more just world. He once spoke in a packed church in West Oakland to the ones he called the “young comrades.” He described his vision of a more just society, in which working people weren’t exploited for private gain, one that would abolish racism and sexism. He gave that vision a name – socialism – at a time when the media claimed that socialism was dead and capitalism was the best humankind could hope for.

“I know that’s a lie,” he shouted out. “The world depends on us, on our labor. And we have the right to decide what kind of world it’s going to be.”

David Bacon is an author, journalist and photojournalist whose new book, “The Right to Stay Home: Ending Forced Migration and the Criminalization of Immigrants,” is coming out this year from Beacon Press and whose most recently published book is “Illegal People: How Globalization Creates Migration and Criminalizes Immigrants” (Beacon Press, 2008), which won the C.L.R. James Award for best book of 2007-2008. He reports regularly on labor and immigration for KPFA and can be reached at dbacon@igc.org.