The great Paul Robeson was a Black revolutionary thinker and artist of the early Human Rights Movement in this country, meaning pre-Martin Luther King and El Hajj Malik El Shabazz. Paul Robeson was a Black celebrity who was bankrupted by the U.S. government because of his unpopular stances against imperialism and injustice in the U.S. perpetrated by the U.S. government against Black people. 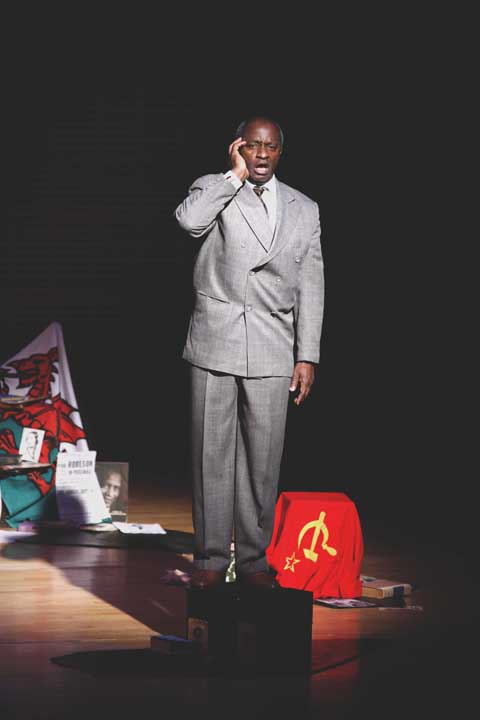 He was a star athlete in college, a member of the Communist Party and a man who spoke over half a dozen languages fluently. He was also an early victim of the U.S. government’s COINTELPRO program that led to his early demise. He was a revolutionary genius. Tayo Aluko, a Nigerian born thespian from Britain, wrote a play about this revolutionary activist called “Call Mr. Robeson: A Life, With Songs,” which he will perform Friday, Feb. 1, 7:30 p.m., at the Phoenix Theatre, 414 Mason St., San Francisco. Get tickets here. Read Tayo in his own words …

M.O.I. JR: Can you tell us how you became a thespian? Who were you inspired by?

Tayo: I have always enjoyed performing on stage, right from being in secondary school at home in Nigeria. I remember performing in Shakespeare’s “King Lear” then, and as it was a boy’s school, I played the part of one of the daughters. I always jokingly assure people that that was the last time I ever wore a dress – in public.

My inspiration at the time was my older brother who played the role of King Lear. I trained and worked as an architect for many years but decided to go full time as an actor in January 2009.

M.O.I. JR: How does the European theatre scene differ from the scene in the United States?

Tayo: There is a much larger scene here in the states than in England, where I live, really because it is a much larger country. I also get the impression that the culture extends into colleges and universities more so here than in the U.K.

Tayo: Paul Robeson was in my opinion one of the finest and most remarkable Americans – or even human beings – who ever lived. A performer of the stature of a Morgan Freeman, an activist with the insightfulness of Malcolm X and a sportsman as impressive as Michael Jordan all rolled into one. I found out very late in my life that this man had existed, been extremely famous in his time, and had paved the way for modern civil rights leaders, but had been almost completely written out of history. I felt that the things he said then are still very relevant to us today, and that his voice needed to be heard and his legacy resurrected.

M.O.I. JR: In the press release, it says that your play talks about how Paul Robeson’s politics led to his downfall. Do you think that it was a mistake for Paul Robeson to stand up for his beliefs?

Tayo: No, I don’t think it was at all. He said many times, “I refuse to let my personal success, as part of a fraction of 1 percent of the Negro people, explain away the injustices to 14 million of my people.” He knew that doing so would have grave consequences, but it was a choice he made deliberately, selflessly and bravely, and his example has inspired thousands around the world: Sidney Poitier and Harry Belafonte included.

M.O.I. JR: Where will you be performing this month?

The People’s Minister of Information JR is associate editor of the Bay View, author of “Block Reportin’” and filmmaker of “Operation Small Axe” and “Block Reportin’ 101,” available, along with many more interviews, atwww.blockreportradio.com. He also hosts two weekly shows on KPFA 94.1 FM and kpfa.org: The Morning Mix every Wednesday, 8-9 a.m., and The Block Report every Friday night-Saturday morning, midnight-2 a.m. He can be reached at blockreportradio@gmail.com.

“Call Mr. Robeson,” an award-winning play that received a standing ovation at New York’s Carnegie Hall in February 2012, is to be performed at three Bay Area venues in February as part of Black History Month: Starting at the Phoenix Theatre, 414 Mason St., San Francisco, on Jan. 31 and Feb. 1, at 7:30 p.m., it returns to the East Bay Center for Performing Arts, 339 11th St., Richmond, on Feb. 24, at 3 and 7 p.m., after performances in Washington State and across the border in British Columbia. The final performances on the tour will be back in the Bay Area, at the Theatre on San Pedro Square, 29 North San Pedro St., San Jose on Feb. 28 and March 1 at 7:30 p.m.