At approximately 7 p.m. ET, I listened through a police scanner as San Bernardino sheriffs gave the order to burn down the cabin where suspected murderer Christopher Dorner was allegedly hiding. Deputies were maneuvering a remote controlled demolition vehicle to the base of the cabin, using it to tear down the walls of the cabin where Dorner was hiding, and peering inside. 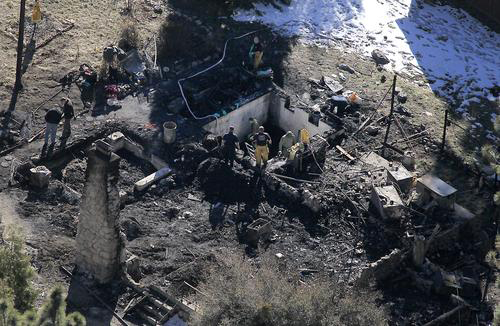 In an initial dispatch, a deputy reported seeing “blood spatter” inside the cabins. Dorner, who had just engaged in a firefight with deputies that killed one officer and wounded another, may have been wounded in the exchange. There was no sign of his presence, let alone his resistance, according to police dispatches.

It was then that the deputies decided to burn the cabin down.

“We’re gonna go ahead with the plan with the burner,” one sheriff’s deputy told another. “Like we talked about.” Minutes later, another deputy’s voice crackled across the radio: “The burner’s deployed and we have a fire.”

Next, a sheriff reported a “single shot” heard from inside the house. This was before the fire had penetrated deeply into the cabin’s interior and may have signaled Dorner’s suicide. At that point, an experienced ex-cop like him would have known he was finished.

Over the course of the next hour, I listened as the sheriffs carefully managed the fire, ensuring that it burned the cabin thoroughly. Dorner, a former member of the LAPD who had accused his ex-colleagues of abuse and racism in a lengthy, detailed manifesto, was inside. The cops seemed to have little interest in taking him alive.

At approximately 7 p.m. ET, I listened through a police scanner as San Bernardino sheriffs gave the order to burn down the cabin where suspected murderer Christopher Dorner was allegedly hiding.

“Burn that fucking house down!” shouted a deputy through a scanner transmission inadvertently broadcast on the Los Angeles local news channel, KCAL 9. “Fucking burn this motherfucker!” another cop could be heard exclaiming.

While live ammo exploded inside the cabin, the deputies pondered whether the basement would burn as well – they wanted to know if its ceiling was made of wood or concrete. They assumed Dorner was hiding there and apparently wanted to ensure that he would be burned to a crisp. “Because the fire is contained, I’m gonna let that heat burn through the basement,” a deputy declared.

SWAT teams airlifted to the location were told to be ready in case Dorner did manage to escape. “Guys, be ready on the number four side [the front of the cabin],” a deputy declared. “He might come out the back.”

Just after 7 p.m. (4 p.m. PT), right when the orders were given to deploy the “burners,” San Bernardino County Sheriff’s Department Public Information Officer Cindy Bachman hastily gathered reporters for an impromptu press conference. Claiming to know nothing new, she told reporters that she had no idea why the cabin was on fire or who started the fire. Reporters badgered Bachman for information, but she had none, raising the question of why the presser was convened when it was.

While live ammo exploded inside the cabin, the deputies pondered whether the basement would burn as well – they wanted to know if its ceiling was made of wood or concrete. They assumed Dorner was hiding there and apparently wanted to ensure that he would be burned to a crisp.

Around the same time, the San Bernardino County Sheriff’s Department requested that all reporters and media organizations stop tweeting about the ongoing standoff with Dorner, claiming their journalism was “hindering officer safety.” As the cabin sheltering Dorner burned, the local CBS affiliate was reportedly told by law enforcement to zoom its helicopter camera out to avoid showing the actions of sheriff’s deputies. By all accounts, the media acceded to police pressure for self-censorship.

On Twitter, the Riverside Press Enterprise, a leading local newspaper, announced on Twitter, “Law enforcement asked media to stop tweeting about the#Dorner case, fearing officer safety. We are complying.” The paper’s editors added, “We are going to tweet broad, non-tactical details, as per the San Bernardino DA’s request.”

“Per [San Bernardino County Sheriff’s Department] request,” tweeted the local CBS affiliate, KCBS, “we are complying and will not tweet updates on #Dorner search.”

At the time that I am writing this, some online media outlets are beginning to entertain the possibility that San Bernardino County Sheriff’s deliberately set the fire that killed Dorner – a fact that I reported on Twitter as soon the sheriff’s department order came down. If there is any doubt about the authenticity of the YouTube clip containing audio of the sheriff deputies’ orders to burn the cabin down, I can verify that it is the real thing. I was listening to the same transmissions when they first blared across the police scanners.

In the hours after the standoff, however, the police cover-up remained unchallenged thanks largely to local media complicity. An initial Los Angeles Times report recounted the incident in a passive voice, claiming “flames began to spread through the structure, and gunshots, probably set off by the fire, were heard.” Similarly, LA’s ABC affiliate, KABC, quoted Bachman’s vague comment about “that cabin that caught fire,” failing to explore why it was aflame or who torched it.

Today, the Los Angeles Times reported claims by anonymous “law enforcement sources” that the sheriffs used “incendiary tear gas” to flush Dorner out of the cabin. The sources claimed the deputies who had besieged the cabin were under a “constant barrage of gunfire” and that “there weren’t a lot of options.” 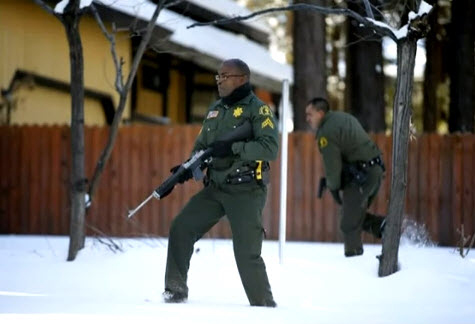 This is almost certainly a lie. The only mention by a deputy at the scene of a gunshot from inside the cabin was the “single shot” that occurred as soon as the “burners,” or incendiary teargas munitions, were deployed. After that point, deputies made constant mention of ammunition exploding inside the cabin as a result of the intense heat of the fire they set, but said nothing about any shots fired at them.

If there were a “constant barrage of gunfire,” it would have been the main source of concern among the police at the scene. Instead, they were preoccupied with ensuring that the fire burned the cabin completely without spreading into the surrounding woods.

There is a grand tradition of law enforcement using incendiary devices to assault besieged suspects – and of covering up their use. One of the most famous examples of this tactic, and its horrible consequences, was the Philadelphia Police Department’s bombing of the compound of the radical Black nationalist group MOVE, dropping C-4 explosives by helicopter on the house, killing 11 members of the group, including five children, and destroying 65 homes in the West Philadelphia neighborhood.

It was not until the 51-day FBI siege of the Waco, Texas, compound of the messianic Branch Davidian cult that “burners,” or incendiary 40mm military grade cartridges, were used to burn a structure down. Six years after claiming that the Branch Davidians deliberately burned their own compound down, the FBI finally admitted that it used incendiary rounds but insisted that none of them contributed to the fire that consumed the compound.

The “burners,” or pyrotechnic rounds the San Bernardino County Sheriffs used to torch Dorner’s cabin, are likely similar, and perhaps more powerful, than those employed by the FBI in Waco. Through the five-year-old “Department of Defense Excess Property Program,” the U.S. military has provided police departments across the country with billions of dollars worth of military equipment, from amphibious tanks to AR-15 assault rifles, allowing the military to circumvent Posse Comitatus regulations by outsourcing their firepower to local cops. 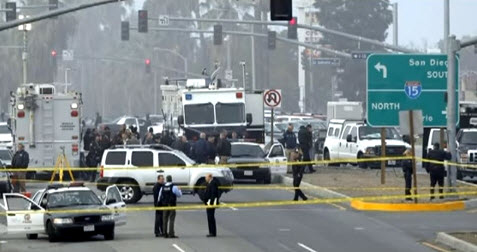 “Burners,” or military grade incendiary grenades, are very likely among the items passed down from the U.S. army to local police outfits like the San Bernardino Sheriff’s Department. The “burner” of choice for the modern American soldier is the AN-M14 TH3. It is a hand held grenade comprised of a thermite mixture that rapidly converts to molten iron when it is thrown, burning at a temperature of 4,000 degrees Fahrenheit, hot enough to burn through a half inch steel plate or bring an engine block to a boil. It can also produce enough heat to set off unloaded ammunition, which would explain why the ammo inside Dorner’s hideout was popping.

If the San Bernardino Sheriffs employed the AN-M14 TH3 or something like it against Dorner – and it appears they did – they have good reason to attempt to cover their actions up. Without even a token attempt to establish communication with the suspect, who was, to be sure, a wanted killer hell-bent on murdering cops, they attacked him with what was likely a military grade weapon designed to destroy fortified structures. By burning Dorner alive, then misleading and deceiving the public about the operation, the sheriffs may have validated the rogue ex-cop’s sharpest indictments of the culture of American law enforcement.

Yet no element in the Dorner drama was more disturbing than the performance of mainstream media. At every point, major news outlets complied with law enforcement calls for self-censorship and still demonstrate little interest in determining how and why a lethal fire started on a snow-covered mountain in the dead of winter. As a quintessentially American tragedy reaches its denouement, the truth remains buried beneath a smoldering pile of ashes.

Read a Storify collection of Max Blumenthal’s livetweeting of the Dorner standoff. Blumenthal, formerly the senior writer for The Daily Beast, is the author of “Republican Gomorrah” (Basic/Nation Books, 2009). Reach him on Twitter at @MaxBlumenthal. This story first appeared on AlterNet.

The justice in Christopher Dorner’s rebellion

Wanted dead, not alive: LAPD is afraid of what renegade cop Chris Dorner has to say