The CDCr are masters at pulling the wool over the eyes of the California taxpayers, activist organizations, civil and human rights organizations, religious institutions, prisoners, men and women, and state and federal courts.

Their blatant disregard for the truth is rooted in their drive to build the California sector of the prison industrial slave complex – CDCr and CCPOA, the prison guards union, which is about maintaining the CDCr’s cash cow that feeds its force. Profit is only possible where there is a surplus of prisoners – i.e., human beings – to be exploited. As we initially informed our supporters who are genuinely good, loving, dedicated human beings, the people who oversee the CDCr are inherently evil men and women, who use a diabolical approach in order to maintain and sustain their profit interests, the CDCr cash cow.

The recent reality that has come out of our two year struggle to be released from solitary confinement is actually showing the true nature of this beast, identified as CDCr, which uses double talk, known to many of us as deceptive lies, premeditated lies, that are deliberately designed to mislead those they are lying to.

The STG/SDP, Security Threat Group/Step Down Program contains lessons for us all. The details are clear as to the insidious class and racial discrimination with which it is implemented. We now have allowed our supporters to see that the actions of CDCr-CCPOA massively tax Californians by relying on the lying game to maintain their respectability with a naïve general public – i.e., their families, their relatives, their churches and their friends – along with establishing a network that CDCr uses to demonize and dehumanize prisoners and their communities, while making the CDCr out to be agents in the service of Jesus Christ.

The CDCr-CCPOA have to use the lying game as a means of sustainability, because they have no truths to stand on. The very system was built on a lie and it will be destroyed by its very lies.

But the CDCr has lies that can only be exposed by our truths; therefore, we prisoners have to be willing to speak truth to power, which is 10 times harder once a lie has been told. But truth liberates when it is against the oppressors. 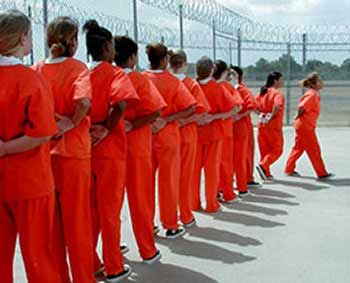 One truth we wish to leave you with is that there are many young, middle aged and elderly women being held in California prisons, in particular in CIW, California Institution for Women, and CCWF, Central California Women’s Facility. The total number is more than 5,735 in these two modern day slave quarters for women. These women have been subjected to cruel and unusual punishment in the shrewdest of applications. The CDCr-CCPOA prison guards union has been able to keep the harsh treatment of imprisoned women in the state of California under the radar, for the most part. As prisoners, we women and men know the truth.

We know that women are being traumatized daily in these prisons by sexual predators who identify themselves as upstanding prison guards who hide behind the badge of the CDCr’s so-called “honor,” while countless women are being raped and molested in the name of the CDCr – physically, psychologically and spiritually. They try to strip these women of their dignity and soul – prison guards invading the women’s most intimate areas, personal garments, showers and cells, through strip searches, groping pat downs etc.

The mere fact that the courts had to implement into law that women cannot be chained in restraints while giving birth is a clear sign that the United States is asleep while atrocities are being committed against women inside prisons all over this nation. The prison industrial slave complex has established itself so deeply into our society that the very people who are supposed to keep an out-of-control system in check have become desensitized to women being tortured in prisons.

Prison oppression is geared toward oppressing the ‘less desirable’ citizens of this nation. Women who are held in CIW and CCWF are being denied the basic keeping up of their hygiene. It is inhumane to deprive these women of an adequate amount of private hygienic toiletries, a reflection of the very system that goes around advocating the safety and security of the public.

To treat women and men in these prisons like savages does nothing to protect society at large. This is only the practice of a sadistic CDCr-CCPOA that has for the last 30 plus years maintained itself by subjecting human beings to dehumanizing conditions, while they profit. We prisoners know that these women’s prisons are overwhelmingly packed with New Afrikan women, Mexican women, Latino women and poor white women – poor being the operative word, because the prison industrial slave complex, PISC, exclusively uses prison corporations to incarcerate poor, under-educated Amerikans throughout this country.

I ask that every poor person incarcerated study slavery in all its forms, because the very practice of mass incarceration is slavery. You will see that the same components exist – bondage, dehumanizing, sadistic, insidious attacks being carried out against the poor people of this nation – systematically, for a profit, amounting to exploitation!

Our prison motto is that we prisoners, women and men, have to become united as one in order to beat back the many attacks from the CDCr/PISC. We cannot allow small incentives for a few to divide us, because at the end of the day we all will be treated the same. For instance, women in California are also held in solitary confinement units, which we identify as torture chambers, on indeterminate terms, meaning forever.

We know that CDCr-CCPOA use on women the same physical and psychological attacks that we are made to suffer here in Pelican Bay State Prison Short Corridor and Long Corridor, D-1 through D-10, C-1 through C-12 and Ad Seg throughout our indeterminate stay. We know that women and children, our future nation builders, our life providers – grandmothers, mothers, aunties, sisters, nieces and cousins, who gave each and every one of us life – are going through torture, not rehabilitation.

To treat women and men in these prisons like savages does nothing to protect society at large.

Therefore, as a “prison class,” we must make it known that we men prisoners together with women prisoners must illustrate through our humanity what civilized women and men prisoners look like to this nation. As CDCr attempts to dehumanize us, we continue to defy them, by representing our humanity.

I ask that every poor person incarcerated study slavery in all its forms, because the very practice of mass incarceration is slavery.

To suffer in silence is a crime against ourselves. Our only chance to survive this onslaught is to unite our voices with the greater good of this nation.

All power to the women in solitary confinement prisons!

Pelican Bay Human Rights Movement is forever in solidarity with all women in and out of prison.