“One picture,” Fred R. Bernard once aptly remarked, “is worth a thousand words.” But, we need only a few words to describe an unsettling truth vividly depicted in the drawing shown here. On first glance, this picture evokes visual images of cruelty, dehumanization, exploitation, racism, injustice, corruption, disenfranchisement, arbitrary punishment and a host of other instruments of oppression people use to harm or exploit others. What do you see? Let’s look closer. 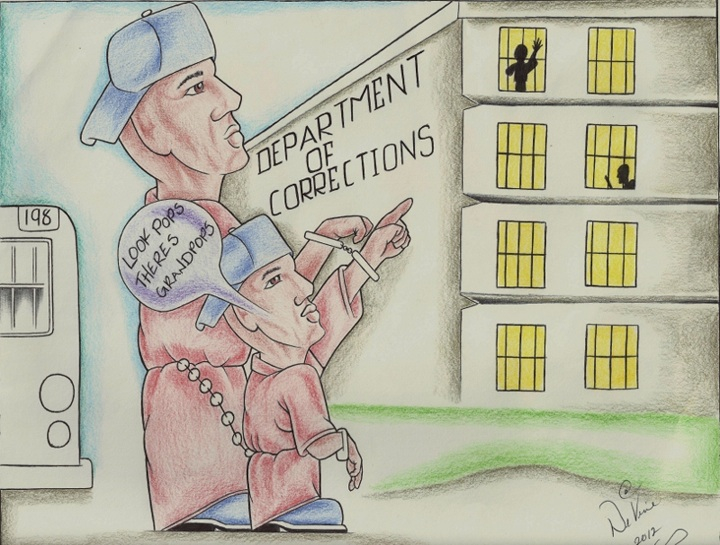 What a tragic image: A man and his son handcuffed and shackled together, yet musingly delighted about seeing a senior family member whom they are not going inside to visit. Rather, the two are to join in what is widely considered as America’s modern day form of slavery.

The inhumanity represented in this artwork should be disturbing to anyone with a conscience – but few are moved. The great American writer and philosopher Ralph Waldo Emerson gave a simple explanation for human indifference towards other human suffering when he wrote, “What it does not see, what it does not live, it will not know.” The chilling reality of Emerson’s words can be used to describe the mindset of most Americans, especially the majority who are unaware of how political, legal and corporate entities work in tandem to perpetuate a cruel cycle of generational incarceration.

Those who are aware of what Michelle Alexander describes as the “New Jim Crow” nevertheless may believe that most prisoners deserve the way they are mistreated – regardless of whether or not the policies and practices of the criminal justice system violate every principle of moral decency and fairness.

The great American writer and philosopher Ralph Waldo Emerson gave a simple explanation for human indifference towards other human suffering when he wrote, “What it does not see, what it does not live, it will not know.”

Another important reality hard to discern in this picture are the causes of generational incarceration. It is difficult for people to accept how generation after generation of under-education and sky-high unemployment rates significantly determines the degree of criminality in urban communities.

Numerous studies show how the unequal distribution of wealth, education and political power essentially predetermines which segments in society will accept unlawful activities as a means of survival. Since none of us choose the socioeconomic status we are born in, we must ask ourselves: Are those incarcerated totally to blame? Or is society partially culpable?

For a quarter of a century, mass incarceration has not proven to be a deterrent to crime.

I do not wish to give the impression that I believe that the United States’ prison system should be abolished. It has purpose. I’m only pointing out how political and legal authorities create laws that damage the social fibers in African American and other communities of color. It is as if they deliberately create policies and laws without any concern for the long-term ramifications these laws will have on low income, poorly educated societies.

America is a relatively well-off country boasting the highest average income, yet it has flagrant economic class divisions. To see this, just drive a few blocks over, or turn on your local news channel. Our rugged individualism – a by-product of our brand of market economics – promotes a callous indifference for the well-being of others.

This ideology is captured raw in one of Kanye West’s songs, “I got mine, you get yours.” This selfish attitude fosters negativity and desperation. No wonder lower income youth turn out to be violent predators and substance abusers, mimicking behaviors that promise that they will be ensnared by a criminal justice system that thrives off misery and unwise decisions.

Since none of us choose the socioeconomic status we are born in, we must ask ourselves: Are those incarcerated totally to blame? Or is society partially culpable?

In a derisory attempt to address this social problem, legislators harden the penalties of existing laws. Now, lawbreakers receive sentences that are disproportionate in degree of severity to the crime committed. Such laws create a ripple effect throughout many of the poorest communities. For instance, prisoners receiving unfairly long sentences, often lose family connections. Consequently, when they return to society, they are often bitter and they lack vital support systems essential to make a smooth integration back into society.

It is as if they deliberately create policies and laws without any concern for the long-term ramifications these laws will have on low income, poorly educated societies.

The problem of wholesale incarceration, moreover, is compounded by corruption. Increasing privatization allows corporate prison suppliers to receive lucrative no-bid contracts that permit them to sell prisoners inferior products at five times or more their retail value. In the Michigan Department of Corrections, for example, inmates are charged $3 for a 15 minute, non-collect phone call. In other state departments of corrections, the rates are as high as $9. Such anti-competitive business practices allow prison contractors – like Westinghouse, Union Supply, Sprint and Keefe Group – to rake in monopoly profits, or “rents” as economist Joseph E. Stiglitz calls them.

Thus, private owners of prisons and supply contractors view prisoners as a precious commodity. This explains why more and more private owners are lobbying lawmakers to stiffen prison sentences. Crowded prisons maximize profits. But corruption is not limited to corporations and bureaucrats on the outside. Inside prison, corruption is more vulgar.

Private owners of prisons and supply contractors view prisoners as a precious commodity.

Television shows like “Inside American Jails,” “America’s Hardest Prisons” and “Women in Prison” do not expose the brutality and dehumanizing treatment of prisoners in general. African American inmates, in particular, are subjected to even harsher abuse than their counterparts, mostly because of racism. Nine out of ten times, they are held in remote correctional facilities, several hours drive away from their hometowns. Often, the staffs of these correctional facilities are 100 percent white. Many guards privately admit that their first encounter with Blacks occurred after they were hired. 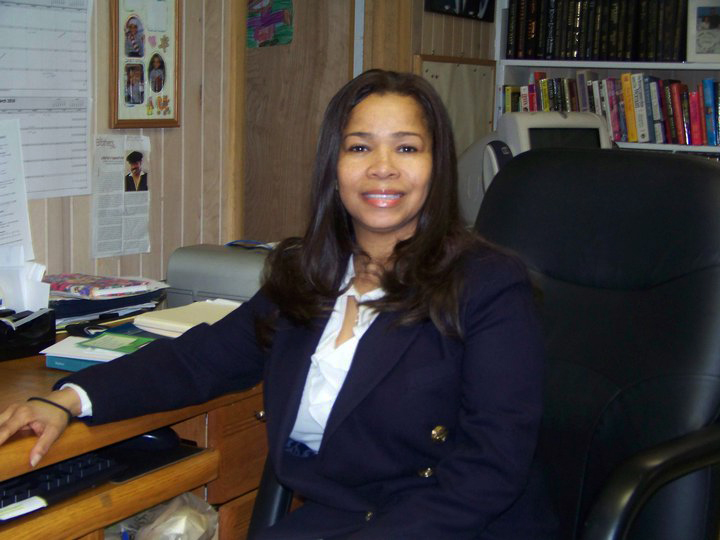 In addition, there are published cases that show how sexually depraved prison guards are convicted of raping female, male and mentally handicapped prisoners. Records show that it is not uncommon for prison guards to get indicted for selling cocaine and heroin to prisoners. In fact, numerous prison guards were arrested recently for running a drug ring inside a Pennsylvania state prison.

Look at the illustration again. Now, let’s try to redraw a better one. There are more humane, effective ways to decrease the crime rate. We can begin by increasing funding for education and bringing back exported jobs. For a quarter of a century, mass incarceration has not proven to be a deterrent to crime. Reform, rehabilitation and continued family support are the answers, the essential elements that are needed in prisons. Incarceration should be utilized only as a last resort.

L.C. DeVine is a writer, editor and CEO at LC DeVine, LLC. She can be reached at lcdevine50@gmail.com.