In 1977, the Pacifica radio network, created by pacifist Lew Hill in Berkeley, acquired a jazz station that it named WPFW, located in the northwest section of Washington, D.C. Since that time a number of radical radio voices have matured on these airwaves, including Jared Ball, Sheika Amandla, Naji Mujahid and the Ill Street Blues Crew, to name a few of the Black broadcasters that give the station that chocolate sound. 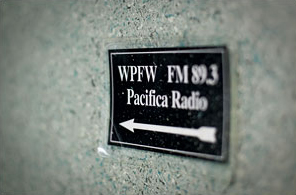 For more than a few years, the station has been mired in financial debt, so much so that rumors are flying around that plans are under way to sell WPFW to corporate media giant Clear Channel. If this happens, Pacifica will lose its voice in the nation’s No. 1 media market. WBAI, Pacifica’s New York station, is also in financial trouble in the No. 2 market.

Before we let Pacifica ruin the tiny bit of a voice that Black people have in D.C., we have to ring the alarm so all the lovers of public radio in the nation can rally up and hopefully save the day. This is a revealing Q&A interview that I did with WPFW broadcaster Luke Stewart …

M.O.I. JR: Can you tell us the history of WPFW? When was it founded? And on what principles?

Luke: WPFW and Pacifica’s mission statement describe the principles upon which they were founded. I am admittedly a relative newcomer to the station – since 2008. However, the stories and history have been regularly discussed among many of the elders of the station, who are also elders in the D.C. community.

WPFW specifically was founded in Washington, D.C., at a time when it was a mostly Black city and was at the forefront of Black culture and consciousness in the U.S. As a result the station has always had a unique identity within the Pacifica network. That identity being known as a music station, namely jazz. The station has facilitated programs for some of the most knowledgeable and experienced jazz historians and operates in a rich jazz community. Also WPFW has facilitated the voices of the rich Black intellectual community of D.C., covering the many events and activities occurring in and around town.

M.O.I. JR: What have some of the major milestones been at WPFW?

Luke: Since I have been affiliated with the station, first Program Director Bob Daughtry got fired – initially, under Grigsby Hubbard in the fall of 2010 – which led to the founding of the Programmers’ Association that fall at a meeting when then Pacifica Executive Director Arlene Englehardt was caught in a fabrication around the firing of Bob Daughtry. Finally, a letter of “No Confidence” was presented to the current WPFW general manager in December, 2011.

M.O.I. JR: Can you talk a little bit about the history of WPFW’s financial situation?

Luke: Since I have been around, the mantra has always been variations of “We’re broke.”

M.O.I. JR: When did Pacifica start talking about selling WPFW to Clear Channel? Where is the deal at now?

Luke: As a staff member and programmer, there has yet to be an official announcement on the status or activity around this matter. With the exception of the general manager and a select few, no one has been notified officially about the situation. The information that some programmers know is only through some espionage.

Right now the lease has been signed by WPFW General Manager John Hughes and Pacifica Executive Director Summer Reese. The last I heard, Clear Channel was ready to sign after seeing three years’ worth of financials from Pacifica and WPFW. But since Pacifica lost its 501(c)(3) status, Clear Channel has held off.

M.O.I. JR: How do you think this move will affect the station’s programming?

Luke: The station’s programming has already been severely affected by the will of John Hughes. As of Dec. 3, no longer is jazz played throughout the day. Many of the station’s most radical voices have been silenced in the changes.

I can only speculate what Clear Channel’s role will be. In speaking with a fellow programmer, I see two possible scenarios: 1) The best scenario – still a bad one: Clear Channel leaves WPFW’s programming unaffected and uses us as its progressive token station. 2) Clear Channel has a nefarious plan to take over by entering a sublease agreement with a nearly bankrupt station and a fully bankrupt network.

M.O.I. JR: Do you think this move will affect alternative media in the nation?

The difference lies in the coverage and the amount of people who will be able to hear the alternative voices. Almost like internet hype versus radio, TV and film hype. Both have access to millions, but the internet has access to a wider range of people.

We in alternative media just have to do a better job in creating and promoting our products. All the tools we need are out there for us.

M.O.I. JR: How can people keep up with this battle online?

Luke: Social Media has proven numerous times to be an extremely powerful tool. Being organized and concise is the most important thing on the internet. Currently there is a website, http://thepeople4pfw.wordpress.com/, where concerned listeners and supporters have been directed for more info and how to get involved.