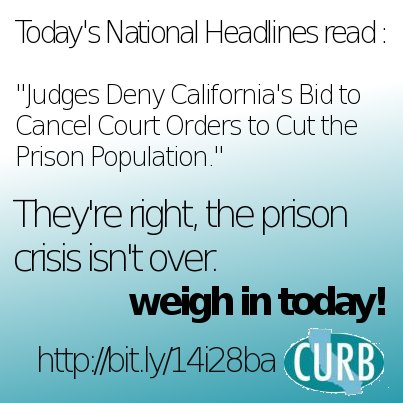 Sacramento – Yesterday’s ultimatum by the three-judge panel puts Gov. Brown and the California Department of Corrections and Rehabilitation on notice to present a plan for further reductions in the state’s unconstitutionally crowded prisons within the next three weeks.

“The propaganda that Gov. Brown and Secretary Beard have been feeding Californians didn’t cut the mustard with the court,” said Misty Rojo, program coordinator for the California Coalition for Women Prisoners. “Conditions inside continue to be terrible, and in women’s prisons the situation is getting worse.”

Advocates who have criticized the governor’s criminal justice realignment plan as inadequate were quick to praise the court decision.

“Realignment itself, no matter how it was implemented, was never going to produce an adequate reduction in the prison population,” said Diana Zuñiga, field organizer for Californians United for a Responsible Budget. “It has been clear for years that a serious solution to the prison crisis would require serious sentencing reforms and changes to parole and compassionate release policies.”

The court ordered the CDCR and governor to “identify prisoners unlikely to re-offend” and reduce the population by 9,000 before the end of the year. The court threatened the governor and other state officials with contempt of court if they fail to comply. Groups led by those who are members of Californians United for a Responsible Budget have worked for years to convince Sacramento to institute common sense changes already in place successfully in other states, including: 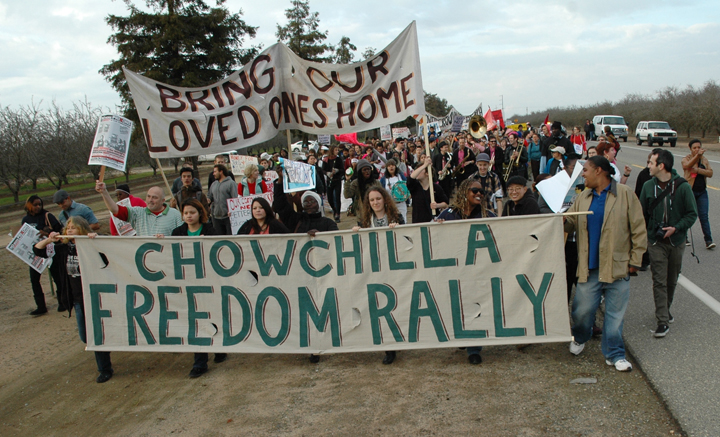 “This is a historic opportunity for the governor,” said Debbie Reyes of the California Prison Moratorium Project.

“Gov. Brown put California on the disastrous road to mass incarceration during his second term in the 1980s. During his current term, he can begin the process of turning California away from a prison-first mindset. The sorts of real changes the court demands will require changes to California’s dysfunctional sentencing laws. Those changes should, as the court suggests, be applied both prospectively and retrospectively.”

“Will Gov. Brown and Secretary Beard continue to dig in their heels to defend an indefensible prison system? Or will they demonstrate that they have the courage, vision and leadership we need to make meaningful changes to our super-sized prison system?” asked Zuñiga.

CURB’s message to advocates: This is one of those game-changing moments

Late yesterday, the three-judge panel overseeing the California prison population cap issued a stinging rebuke to Jerry Brown’s foot dragging and showmanship. They didn’t buy his claim that everything is just fine in California and instead made their most pro-active ruling yet.

In effect, the judges said: 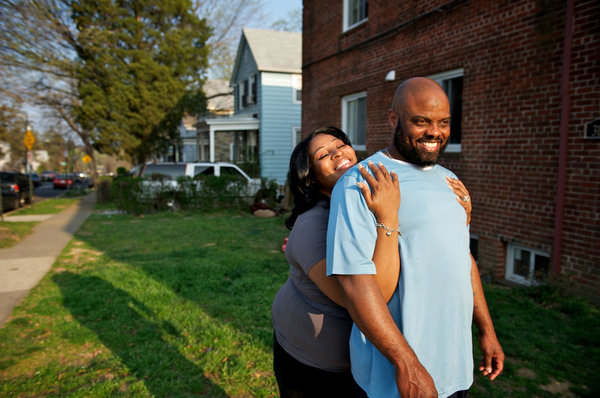 This is a huge opportunity – but the administration is going to fight back as hard as ever. It’s an all-hands-on-deck moment: and the most important thing we need to do today is win the media cycle.

Jerry Brown and the rest of the obstructionists aren’t going to spin this just as a policy issue. They’re going to try to scare Californians to death about the fact that people will actually have a chance to come home.

It might be subtle and it might be scandalous, but you can bet your bottom dollar that they are going to try to mobilize fear against the long-overdue reforms we all want.

Please click here now and send a letter to the editor to a paper near you showing our support for the court’s new, more aggressive stance – and for bringing people back to our families and communities.

The court set a tight 21-day timeline for the administration to present a new plan to come into compliance with their order. We’re ready to push the policies we know will work – and there’s no question we’re going to need everyone’s help backing those up.

But first thing first. We absolutely have to control the story on this one. Help us send 100 letters to media outlets up and down the state right now – and make sure our side of the story is told.

Emily Harris, who heads Californians United for a Responsible Budget, can be reached at emily@curbprisonspending.org.