One of our best known Black broadcasters in the Bay Area is also one of the most well known Black thespians from these parts. After decades of honing his acting skills, Donald Lacy is starring in the new play “The River,” which will run April 10 through May 4, 8 p.m., at the ACT Costume Shop, located at 1117 Market St. at Seventh in San Francisco. Check out thespian Donald Lacy in his own words …

M.O.I. JR: Can you tell us what interested you in theater? When did you get into theater? 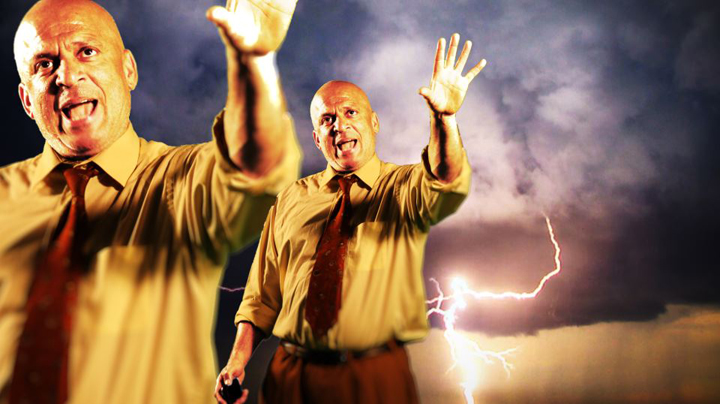 Donald Lacy: I got started in theater in college at San Francisco State. I started a group called Black Artists for Artistic Awareness. I started it because I was in Brown Bag Theater and we were gonna do an Athol Fugard piece about Apartheid South Africa, and this was in the early ‘80s when people were talking divestment, freeing Nelson Mandela and all of that.

And the white powers that be decided two days before the play was to open that we could not do it. They replaced the piece with Woodie Allen’s “Death Knocks.” They were afraid of the political. Along with the PASU (Pan African Student Union), we were outraged. The department at that time was all white. So we started BAFAA and produced a play I wrote on research based on the notorious Atlanta child murders, “The Loudest Scream You’ll Never Hear,” which was professionally produced in 1985 and 1989.

M.O.I. JR: Can you tell us a little bit about the new play you are in, “The River”? Who wrote and directed it? Who do you play?

Donald Lacy: The play is the world premiere of Richard Montoya’s play “The River” written for Campo Santo, which I am a proud member of. The play is dedicated to our brother, the great actor Luis Saguar, who died a few years ago. The play is about loss, and how we live with loss. It’s also about illegal immigrants and the inhumane way they are treated.

Richard is from Culture Clash so there is a lot of comedy in the play, but it goes deep as well. We must all see ourselves in the reflection of the river and see our true selves, not the fake self. I play brother Ballard Freeman, a reformed heroin user who has become spiritual. He is a fascinating character who has lived many lives. The cast is great from top to bottom, and people will have their spirits fed when they come and see the show.

M.O.I. JR: What is the importance of theater in our society?

Donald Lacy: Wow, great question. It’s the life blood of any so-called civilized society. Theater should reflect the health or lack thereof of a society. And it should point out all of society’s ills, injustices, beauty, vibrancy, cultures and differences that make us human beings such interesting characters. Theater has been the platform to represent social justice issues for years around the world. And for me, that is why I do it: to do work that helps move the human race forward in consciousness.

Donald Lacy: Because without the people, there is no theater. In this day of so-called sequestration, where the super-rich don’t want to give back anything, they only want more and more. Theater, particularly Black theater, is an endangered species.

Theater’s the life blood of any so-called civilized society. Theater should reflect the health or lack thereof of a society. And it should point out all of society’s ills, injustices, beauty, vibrancy, cultures and differences that make us human beings such interesting characters. Theater has been the platform to represent social justice issues for years around the world. And for me, that is why I do it: to do work that helps move the human race forward in consciousness.

Just look at the Bay area. I tell young Black actors all the time, when I started as a professional actor in 1984, I was in a play that was at the Julian Theater. The play was about Jonestown, Guyana, and was directed by the great John Henry Doyle, who passed away recently. John taught me a lot about the craft. He was a great director.

During that time there was OET (Oakland Ensemble Theatre), Lorraine Hansberry, Julian Theater, Black Rep, my company, Full Circle Theater Collective, Ed Bullins had a company; there were a lot of places that Black actors could work regularly. Now Lorraine Hansberry is the only one of those left standing, and they didn’t even have a season this year for the first time in 32 years. Damn.

Donald Lacy: I’m gonna be directing a play called “Mama Said There’d Be Plays Like This,” a spoof on Negro plays that is hilarious, produced by the producers of Martin and the Jamie Foxx show. That will start touring this summer. I am also touring my one man show “Color Struck” in Dallas in May and in Tennessee in the fall. We are also work shopping a new play written by Sean San Jose called “Super Heroes,” which is fiction based on “Dark Alliance” by Gary Webb. It’s gonna be deeper than deep.

M.O.I. JR: Can you tell the people a little bit about your show on KPOO? How are the finances doing over there?

Donald Lacy: “Wake Up, Everybody” is now in its 33rd year. It’s a radio show heard every Saturday morning from 7 a.m. to 12 noon on KPOO 89.5 FM and on the web at www.kpoo.com. It is music, news, information, theater, live music, a little bit of everything. But it’s really all about getting information out to the public.

And thanks, JR, for sharing info with me, that I have used on the show. Like what’s going on in Brooklyn – marshal law – and there has been a white-out by the media. We have to keep our people informed of what is going on in the world around us. This is the pilot for more tactics like this. They are gonna be popping up in other cities.

In terms of financing, KPOO is in trouble. We need to raise money immediately or we will be off the air. I hope people read this and come to the aid of a true institution in San Francisco, and truly one of the last bastions of free speech. Help keep KPOO on the air. On www.kpoo.com you can donate. All donations are tax-deductible and are greatly appreciated.

Donald Lacy: At the ACT Costume Shop, located at 1117 Market St. at Seventh Street, San Francisco. Show time is at 8 p.m. The show runs April 10-May 4. You can get tickets at www.theintersection.org.

Donald Lacy: DonaldLacy.com or on Facebook or Twitter or by email at dlacy99@yahoo.com. Thanks, JR, for talking with me, and keep up all the great work that you do.