Attention freedom fighters. It is time that I fire a published poetic nuclear warhead at you. This has to be fundamentally sound to rejuvenate the spirit and souls of those who still walk upright and with dignity to be counted as men within the depths of legalized oppression. My message will be two-fold, addressing one of several lawsuits that I am aggressively pursuing and CDCR’s ongoing twisted campaign of validating and isolating prisoners. 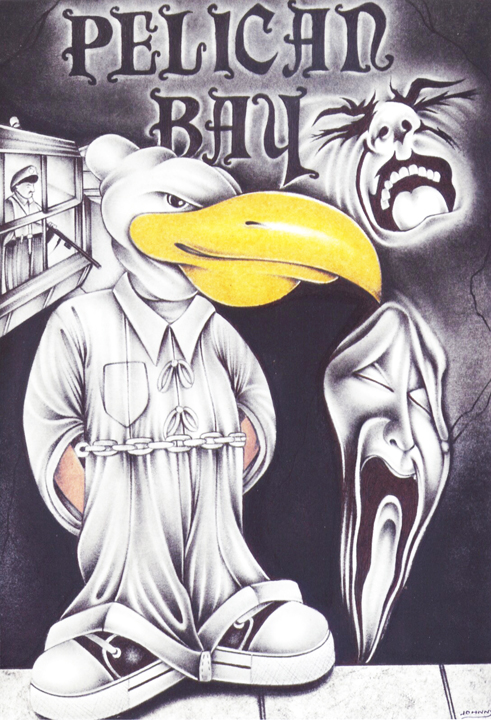 There’s no Hitler slaves in here. This isn’t a German concentration camp. However, the eerie resemblances that were once buried in CDCR’s clandestine ideologies are now becoming public information and Hitler’s ideologies mixed with Jim Crow’s practices are before us. If you don’t go completely antisocial, you will become another victim to CDCR’s experiment.

CDCR has done it again, now with the initiation of the Security Threat Group or STG “Advisement of Expectations” contract that they are boldly promoting. [The writer enclosed a copy of the two-page contract, which prisoners are expected to sign, summarizing the new rules governing those deemed members or associates of gangs. Under the new rules, the definition of Security Threat Groups is expanded from prison gangs to now include “street gangs and disruptive groups.” – ed.]

Apathy is relative in their thought process of not considering their indifference to and/or lack of understanding of different cultural traits outside of the Euro-Christian way of life. Specifically, Black and Brown prisoners who are deeply rooted in customs, traditions, walk and talks outside the realms of Ghetto USA are falling under the STG web of trickery.

The lifestyles and struggles our ancestors, grandparents, aunts and uncles passed down can be used against us. CDCR says that group exercises and cadences to handshakes, gestures, artwork, photographs and a host of other cultural traditions will, Jim Crow-esque style, be considered illegal.

Personal identity of expression is customary in many cultures, but oftentimes in the oppressors’ eyes it is deemed a threat. There was a time in America when a Black slave would be severely punished and sometimes murdered if s/he knew how to read. So imagine living without no civil or human rights. Well, it’s time we as a collective – Black, White, Brown, Red, Yellow – turn stumbling blocks into stepping stones and kick down the doors of fascism and feel good on our way out.

It is time to rebuild those bridges we may have burned with different people and also understand that friendship and home-boy associations don’t usually work in a struggle toward liberation, because people change to accommodate and fit the image of behavior that’s popular at the moment, and freedom fighting isn’t a popular thing. And although we all share common interests sometimes, that prisoner you deem your enemy may be the association needed to overcome some of these hurdles. We cannot afford to destroy all the unique qualities each potential freedom fighter is able to bring forth.

It’s time we as a collective – Black, White, Brown, Red, Yellow – turn stumbling blocks into stepping stones and kick down the doors of fascism and feel good on our way out.

As I look around after my 24th year of incarceration, the last seven years being unjustly held in captivity behind a gang validation that was rejected years ago, that once old man sitting under the tree passing on generational wisdom is non-existent today.

In fact, my 24 years of incarceration may lead one to believe that I am one of the elders. But I am a mere 40 years old and it appears that I am the last of a dying breed of jailhouse lawyers, legal eagles and, more importantly, freedom fighter. CDCR has used every tactic possible to try to break me, but compromising is not an option! Freedom is!

So dig deep into them law books and study constitutional law. It will one day lead you to success. Don’t compromise your rights, especially your First, Eighth and Fourteenth Amendment rights.

Debriefing is not freedom. Harming other prisoners just to lessen the blow of oppression is counter-productive to all of the oppressed prison class. STG matrix is a clear First Amendment violation. So fight the powers, not each other.

CDCR has used every tactic possible to try to break me, but compromising is not an option! Freedom is!

No one wins in the schemes CDCR places before us. The quick-fix matrix they always tend to come up with will always backfire. The initiation of the sensitive needs yards, or SNY, countered their goals: to end gangs, protect child molesters and reward high- and low-powered snitches.

However, new strains of gangs evolve throughout the SNY programs and despite the yearly stats showing that SNY programs have in some cases exceeded the violence within the general population and validated units altogether, CDCR will never allow the public to know about this. Instead they blame everything on those that are validated, which is far from the truth. Some 70 percent of validated prisoners have little to no prison violence record that justifies long-term isolation.

Debriefing is not freedom. Harming other prisoners just to lessen the blow of oppression is counter-productive to all of the oppressed prison class. STG matrix is a clear First Amendment violation. So fight the powers, not each other.

Ironically, in comes the Security Threat Group or STG. Under this act now, SNY inmates no longer get a free ride anymore, which in the long term is good. Now, with 95 percent of the prison population fitting into the matrix of an STG, maybe the next hunger strike or other peaceful means to discontinue CDCR’s quasi-RICO, Jim Crow-esque regulations will disrupt and correct their arbitrary indifferences and tactical lies.

I look forward to CDCR ending all gangs and doing away with TVs and other stagnating influences that hinder the true education the prison class will be forced to learn: law. CDCR cannot restrict a prisoner from anything that isn’t a threat to the safety and security of the institution.

Some 70 percent of validated prisoners have little to no prison violence record that justifies long-term isolation.

Their interpretation of your handshake, who you exercise with, your gesture or posture and all the other twisted trips CDCR is going to use against us basically says that we cannot exist or, better yet, to protect yourself, you must become antisocial. Remember, it’s their perception versus your reality, and most of our realities are deeply rooted in tradition and culture.

Also keep in mind STG isn’t just about Bloods, Crips, Southern or Northern Mexican, Asian or White gangs. CDCR is tripping on the books you read, music you listen to, the way you walk and talk, your creativity, the guy you hang with that they might not like, certain religion-based practices. This is slavery on steroids without the physical lynching but other forms of lynching indeed.

The financial and political interests of CDCR’s lawyers and other so-called professionals tend to mesh with some of the most racist regulations one can imagine. And as always, it will be the legal eagles and jailhouse lawyers’ uphill court battles that will reshape CDCR’s latest quick-fix regulations.

Why wouldn’t CDCR just come to the table with the prison class, where they could greatly improve the prison environment? CDCR is arrogant and they love to experiment at the taxpayers’ expense.

One last note. I am in a constant fight with several lawsuits – some in helping others. My validation suit is in discovery and I plan to bring changes on the level like Coleman did for mental health and Plata did for medical.

However, as it stands with another situation, there was several Black prisoners in 2002 that were rolled up with me in CSP Lancaster. We were rolled up for “conspiring.” During our time in ad-seg we experienced many constitutional violations and I received several declarations from the fellas.

Well, in 2004 I filed a lawsuit and after all these years I just completed deposition up here in PBSP with the attorney general and a private attorney representing the defendants. Trial is near.

I submitted you guys’ declarations in support of my suit. Now, here’s the problem. I’ve been validated for seven years and counting. Many times my property has been taken for retaliation reasons, and IGI has probably taken your name from the declarations and used or plan to use it to validate you. For those that don’t remember me by my government name, my moniker is “Syko Jay” from Watts.

Please contact my judge or have someone to contact me and I will send you a declaration to help you if IGI has illegally used me to unjustly confine you to one of these inescapable predicaments. The case is J. Burton, V. M. Yarborough et al., CV-04-7209 GW, Central Dist., 312 N. Spring St., Los Angeles, CA 90012.

Maybe someday as a collective we can get CDCR to validate and incarcerate the Green Wall correctional officer gang. Real talk.