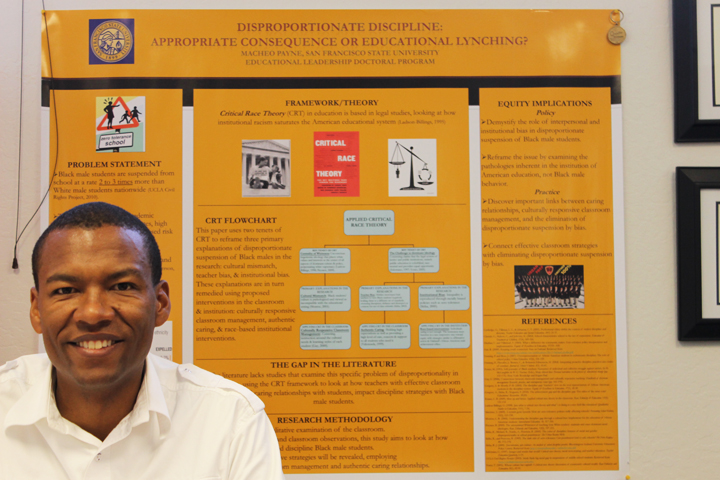 Oakland native and recent doctoral graduate Macheo Payne is making his mark in the field of education by focusing on new practices around keeping Black male youth in the classroom. His dissertation, “The Three Commitments: Critical Race Theory and Disproportionate Suspension of Black Males,” challenges classroom teachers and other school site staff to re-examine their approaches to student learning, particularly learning for young Black men.

“Every day we have thousands of Black males coming to school, coming to class and getting sent out … We need to look at that because you can’t learn if you’re not in class,” said Payne.

Payne found that the achievement gap, or educational debt, between Black youth and their counterparts stems from the suspension rate.

“By looking at the suspension gap, I was able to look at some of the equity issues that were being pushed out,” said Payne. “Since desegregation, what was never addressed by the desegregation ruling was the fact that American education was biased against Black students. It wasn’t [just] that it was separate and unequal, it was biased, whether they were separate or together.”

“Every day we have thousands of Black males coming to school, coming to class and getting sent out … We need to look at that because you can’t learn if you’re not in class,” said Payne.

Payne’s research showed that if and when teachers have what he calls the three commitments: courageous commitment, emotional commitment and a commitment to social justice, teachers could “effectively teach students in the class and deal with behavior disruptions and still have students learn.”

The courageous commitment addresses and challenges institutionalized biases in education that may affect student learning: “[Successful classroom teachers] extended themselves personally and emotionally as well as professionally in a way that is best described as courageous.” Instead of sending students out of the classroom immediately, successful teachers found ways to redirect disruptive students back to tasks at hand and were invested in student success. Student success was linked to teacher success.

Lastly, having a commitment to social justice can ignite teachers to be creative in dealing with students. Teachers who show a commitment to social justice must 1) believe that Black youngsters deal with racism on a daily basis and recognize that racism can be present in the classroom, 2) have a reason why they work with Black males in their passion for teaching, and 3) want to be agents of change in the classroom and community.

“Since desegregation, what was never addressed by the desegregation ruling was the fact that American education was biased against Black students. It wasn’t [just] that it was separate and unequal, it was biased, whether they were separate or together.”

According to the abstract in Payne’s dissertation, the “Three Commitments are potential race-based solutions that can be applied and tested on an institutional and systemic level to eliminate the ongoing race-based inequity of disproportionate suspension of Black male students.” Essentially, this approach is needed because other research merely shows that race is a factor in the achievement gap, but stops short of naming racism as a root and cause.

“We’re already starting to see an interesting trend in California around addressing disproportionate suspensions,” said Dr. Shawn Ginwright, associate professor of education in the Africana Studies Department of San Francisco State University and noted national speaker on youth development and youth activism, specializing in Black youth. He reviewed Payne’s dissertation before it was approved, along with Drs. Jamal Cooks and Jeff Duncan-Andrade.

Recently, the Los Angeles Unified School District adopted a ban on suspensions due to defiance, which accounted for most African American suspensions in the district.

Other research merely shows that race is a factor in the achievement gap, but stops short of naming racism as a root and cause.

Simply put, Critical Race Theory, which is what Payne approached his research with, looks at racism and education as hand-in-hand, a systematic and institutionalized problem that leads to disproportionately high numbers of Black males being suspended and thus, undereducated.

Racism outside the classroom, especially economic discrimination, threatens educational success too. For centuries, Blacks are the last ones hired and first ones fired. This practice affects more than just Black finances; it affects the morale of everyone in the household. School-aged youths’ stress levels rise when parents are stressed due to lack of work and too little money to put food on the table or keep the lights on. The stress can lead to disruptive behavior or alienation that push students out of the classroom. 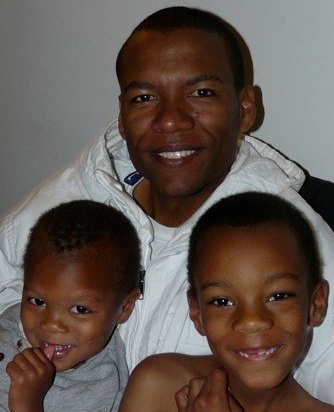 According to Dr. Ginwright, “[Payne’s] work gives empirical evidence and documents ways that suspensions and expulsions have impacted African American young people. His work is really important and timely because it will allow school districts to make more equitable policies related to suspensions and expulsions, particularly related to African American youth and Latino youth.”

As a kid growing up in Oakland, Payne had plenty of struggles in school. He wasn’t motivated out of high school and spent many years in community college before transferring to Cal Berkeley, where he found his niche for working with young people. He also found a purpose to pursue his education.

“Working with young people has always been my passion and education has been the primary setting where I’ve done my work,” said Payne.

If teachers are invested in student learning and not so quick to suspend students for behaviors that may be influenced by the daily stresses that plague the Black community – high unemployment, violence, lack of resources, hunger, few extracurricular activities for youth and being surrounded by educators, family and friends who have no expectation of success – then youth might feel better understood and empowered. That sense of being understood or at least cared for and about can make a huge difference in the lives of urban youth, especially Black males.

“Having experienced that himself, he is able to translate that into lessons that he’s gained to [utilize in his] professional interaction,” he added. “He cares deeply about the young people because he sees himself in many of the African American young people he works with … It gives him a different kind of commitment and passion to make a change.”

“Working with young people has always been my passion and education has been the primary setting where I’ve done my work,” said Payne.

Dr. Jamal Cooks, associate professor in secondary education at San Francisco State University, officially worked with Payne for the past three years but has known him for a number of years in political and educational circles.

Cooks knows first hand the value of Payne’s research. He too grew up in Oakland and remembers that his counselor told him to get ready to transfer to Laney instead of a university. It is that sort of low expectation from educators that needs to be replaced.

“I think the topic is timely,” said Cooks. “I think there needs to be more focus on urban education and particularly African American males, which is what gravitated me toward working with him.”

Cooks hopes that Payne’s research is published so it can be widely distributed among teachers, who desperately need the information to transform their classroom teaching. Previously a middle and high school teacher in Oakland himself, Cooks believes that we can’t wait to address these issues.

“I think there needs to be a sense of urgency,” said Cooks. “[Payne] highlights that urgency … There is no next time, there is no good time. The time is now to make some changes.”

Having multiple levels of support is key to success for young Black males and all youths in and out of school. Many Black families value education, regardless of whether they complete college. What made Payne’s experience different from many of his Oakland counterparts is that he had family support and both of his parents completed college degrees. Many of his immediate and extended family members finished college. A college degree was expected of him.

Having multiple levels of support is key to success for young Black males and all youths in and out of school.

Payne received his doctorate in educational leadership from San Francisco State University this May, but he has been working with youth in the Bay Area for more than 20 years. He has a master’s degree in social work from Cal State East Bay and his bachelor of arts degree from the University of California, Berkeley.

His resume is impressive as well with years of teaching and training to his credit. He teaches in Cal State East Bay’s Social Work Department and his work with youth includes the Lincoln Child Center in Oakland, Youth UpRising in Alameda County, the City of Oakland’s Youth Commission, Leadership Excellence of Oakland and Oakland Freedom School.

In addition, he has consulted with the Children’s Defense Fund and Stanford University’s John Gardner Center, among others. He also serves on numerous boards and commissions.

Cooks thinks Payne’s “commitment level to making sure that things are better for all kids, but focusing on African American boys,” is what drives him and makes him stand out.

“The answers definitely are within the community … in the resources, in the people … It’s about finding and supporting those resources and helping them expand and reach potential,” said Payne.

There are many things that make Dr. Macheo Payne so effective.

His “responsibility to the local community,” said Cooks. “I think he wants to be a model, which I think is admirable and honorable. He wants to be a model because he has a family. My impression is that he wants to be the kind of educator and man and father that his wife and his kids can be proud of. Be able to say he didn’t just talk about it; he did something about it. There are too many people who give lip service. They’re not actually in the field doing the work.”

That understanding has helped fuel Payne’s passion and high commitment level to his community by not only giving back, but investing in African American males in Oakland and elsewhere. The belief that the problem isn’t always rooted in the student but sometimes the approach by classroom teachers and educators is at the root of the three commitments.

“It takes all of us at different levels to fight this fight for urban kids and African American males,” says Cooks. “[Payne] does a great job of mixing all those different perspectives.”

“The answers definitely are within the community … in the resources, in the people … It’s about finding and supporting those resources and helping them expand and reach potential,” said Payne.

For training and consulting, contact Dr. Macheo Payne at macheop@gmail.com.

In Maryland, youth offenders get no second chances