“Afro-Futurism: Envisioning the Year 2070 and Beyond” reflects and builds upon African American history. The art exhibit challenges us to cherish and critique the moment. By placing African Americanism into the year 2070, the artwork and statements visualize a future to look forward to. 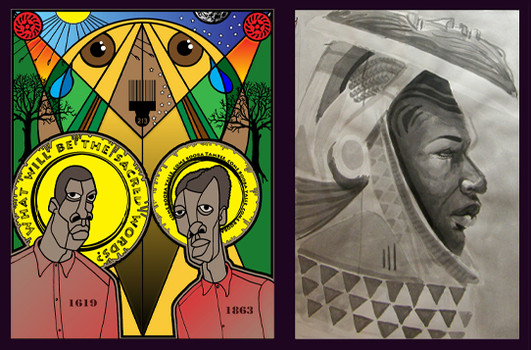 “Afro-Futurism” is rooted in the amazing progress African Americans have made so far and places them into the future. Many African Americans living today grew up with someone who had been born into slavery. Their grandmothers might have told them stories. Those stories may have inspired them to fight back. They – and/or their children – may have supported the defiantly revolutionary Civil Rights Movement or the militant Black Power Movement. But what is the next step in our technologically-based world?

In addition, the exhibit includes statements from 1870, 1970 and people looking into the future. They ask how much has or has not changed over the years.

As curator and creator of “Afro-Futurism,” I believe that the ever-changing technology fulfills, not replaces, those basic human needs that racism had denied. Today, we use the Internet to form communities and social networks, computers to reclaim our genealogy and cell phones to stay continually connected with loved ones.

By placing African Americanism into the year 2070, the artwork and statements visualize a future to look forward to.

I hope the exhibit will inspire many people to think about and plan for the future. Planning requires knowledge and wisdom. Wisdom requires self-reflection, self-criticism and thinking about the consequences of one’s actions.

I also hope the exhibit inspires many people to explore more possibilities. I hope the historical statements remind us of how far we have come – and what more needs to change. We always have choices in life – especially when dealing with racism or obstacles. Seeing these possibilities reveal the power of choice and the impact of any decisions made.

But to actualize some of those possibilities, I believe we need a radical, revolutionary change in our mindset. Money is not the root of all evil; it needs to be invested. Knowledge is power; education is not “acting white” or “uppity.” Power does not corrupt; it’s a basic human drive. In fact, money, knowledge and power could all work together for the future.

Kheven LaGrone, writer, artist and curator of many acclaimed exhibits, can be reached at kheven@aol.com.