On Monday, July 8, 10 p.m., POV will premiere the eagerly awaited documentary “Herman’s House’’ about Herman Wallace on PBS stations nationwide, including KQED in the Bay Area. The documentary can also be seen in full at www.pbs.org/pov/hermanshouse from July 9 through Aug. 6. Here’s the trailer:

by James Ridgeway and Jean Casella 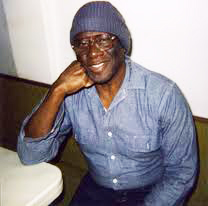 Herman Wallace, 71, has been diagnosed with liver cancer. He is being held in a locked prison hospital room at the Elayn Hunt Correctional Center at St. Gabriel, Louisiana. The prognosis is grave, according to people with direct knowledge of the situation. Wallace is one of the two members of the Angola 3 who remain in prison. He, along with Albert Woodfox, is still being held in solitary after more than 41 years.

Tessa Murphy, U.S. campaigner for Amnesty International, which has taken up the case, said in an email: “The tens of thousands of Amnesty International supporters worldwide who have campaigned over the years for justice in Herman and Albert’s case will be devastated by this sad news. Herman and Albert have been held in cruel conditions of confinement for over 40 years without meaningful review; neither of the men have disciplinary records to indicate that they are a threat to themselves, fellow prisoners or staff, and the Louisiana prison authorities have since 1996 broken their own policy to justify the men’s continued detention under these conditions.’’

Wallace and Woodfox were placed in solitary confinement at the Louisiana State Penitentiary at Angola in 1972, following the murder of prison guard Brent Miller. The men believe they were originally targeted for the murder, and have been held in isolation ever since, because of their association with the Black Panther Party.

The third member of the Angola 3, Robert King, was freed in 2001 when his conviction for the murder of a fellow prisoner was overturned; he had spent 29 years in solitary.

Several years ago, the two men were transferred out of Angola and sent to separate, distant prisons, where they have remained in solitary.

Angola Warden Burl Cain has stated in a deposition that “Albert Woodfox and Herman Wallace is locked in time with that Black Panther revolutionary actions they were doing way back when.” For this reason, he says, they must remain in solitary, because if he released them to the general population “I would have me all kinds of problems, more than I could stand, and I would have the Blacks chasing after them.”

Both men have been fighting to have their convictions overturned by the federal courts, claiming they are based on highly questionable evidence. Woodfox’s conviction was overturned for the third time earlier this year, but he remains in prison while the state appeals. Wallace lost his latest challenge but continues to fight in the courts. At the same time, a civil case has been filed challenging the men’s four decades of solitary confinement on First, Eighth and 14th Amendment grounds.

Wallace is one of the two members of the Angola 3 who remain in prison. He, along with Albert Woodfox, is still being held in solitary after more than 41 years.

For 41 years, Wallace and Woodfox have spent at least 23 hours a day in cells measuring 6 feet by 9 feet. They are sometimes allowed out one hour a day to take a shower or a walk along the cellblock. Three days a week, they may use that hour to exercise alone in a fenced yard.

In their civil suit, their lawyers argue that both have endured physical injury and “severe mental anguish and other psychological damage” from living most of their adult lives in lockdown. According to medical reports submitted to the court, the men suffer from arthritis, hypertension and kidney failure, as well as memory impairment, insomnia, claustrophobia, anxiety and depression. Even the psychologist brought in by the state confirmed these findings.

“The injustice of being held under such harsh, restrictive and inhumane conditions for over four decades is compounded by the serious legal concerns that have emerged in their cases over the years of litigation,” Amnesty’s Murphy said. “Amnesty International will continue its fight for justice for Herman and Albert; with the terrible news of Herman’s health, this fight becomes more important than ever.”

Two months ago Wallace had complained of feeling ill. Prison doctors diagnosed his condition as a stomach fungus and put him on antibiotics. By last week, he had lost 45 pounds and was sent to a local hospital, where he received the news that he has liver cancer. He was returned to prison after a few days. 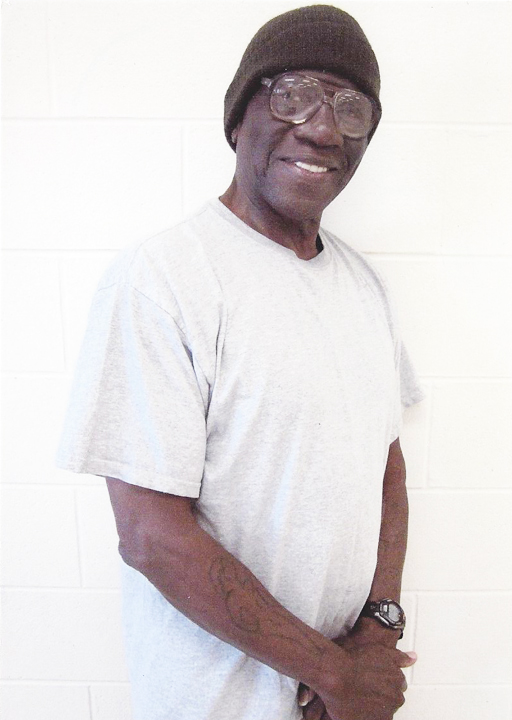 A team of lawyers, an outside doctor who has taken care of Wallace for years and a psychologist briefly visited Wallace last week in a prison hospital room. Wallace was not manacled or shackled. The door was locked. There is no television and little contact with the outside world. Telephone privileges, which were made available in the beginning, have been revoked by the prison. According to one source, a warden ordered visitors out after 10 minutes.

“The level of inhumanity I am not used to,” said Nick Trenticosta, one of Wallace’s attorneys in Louisiana. “I am used to bloodthirsty prosecutors who want to kill people, but not this sort of thing.”

For Albert Woodfox, 66, who lived in solitary nearby Wallace at Angola and still keeps in touch by letter, the news was shocking. According to his brother Michael Mable, who saw Albert over last weekend, his brother is depressed and “afraid of dying in this prison.”

Mable was only able to see Woodfox through a glass partition, and Woodfox sat with his hands manacled and feet shackled while a captain and a lieutenant stood behind him, Mable said. Woodfox was strip searched, even though the interview was just a short way from his cell. He is allowed one visit a month. Woodfox suffers from diabetes, high blood pressure and hepatitis.

It is not yet clear what the next steps will be for Herman Wallace in terms of medical care. Because the prison medical record appears scant, doctors are anxious for Wallace to see an oncologist at an outside hospital. He may go there sometime this week.

Asked whether the state would consider compassionate release or hospice care for Wallace, Pam Laborde, communications director for the Louisiana Department of Public Safety and Corrections, said, “As you hopefully understand, I am not in a position to discuss an offender’s medical condition due to privacy concerns.”

In a 2006 letter to Jackie Sumell, an artist with whom he is collaborating on a project called “The House That Herman Built,” now the subject of a documentary film, Herman Wallace wrote: “I’m often asked what did I come to prison for; and now that I think about it, Jackie, it doesn’t matter. It doesn’t matter what I came here for, what matters now is what I leave with. And I can assure you, however I leave, I won’t leave nothing behind.”

James Ridgeway and Jean Casella are co-editors of Solitary Watch, an innovative public website aimed at bringing the widespread use of solitary confinement out of the shadows and into the light of the public square. Solitary Watch, where this story first appeared, provides the public – as well as practicing attorneys, legal scholars, law enforcement and corrections officers, policymakers, educators, advocates and prisoners – with the first centralized, comprehensive source of information on solitary confinement in the United States.

Please send messages of support to Herman and Albert

It is with great sadness that we write to share the news of Herman Wallace’s recent liver cancer diagnosis.

Today, our allies at Amnesty International and Solitary Watch released articles and statements reporting on Herman’s condition and calling for increased public support at this critical time.

In a statement of support released on Monday, Amnesty International USA’s Individuals and Communities at Risk Campaigner Jasmine Heiss said: “Herman’s condition is grave and we are still waiting for details of his prognosis. Once we know more, we will ask you to make your voices heard to the Louisiana authorities so that our calls for justice ring from the state’s northern border to the very end of the Mississippi river.”

Until then, Amnesty is urging supporters to write letters to Herman and Albert “reminding Herman and Albert that they are not alone – that there are hundreds of thousands of people standing with them, even as the state tries to keep them in total isolation.

“You can download cards to send to Herman and Albert at Amnesty. You should add a personal message and, if possible, also send pictures of your hometown, nature or animals to lift the two men’s spirits. Albert and Herman are held in two different prisons, so please be sure to write to both of them separately – Albert is struggling with the news of his friend’s illness, so he needs your words of support just as much as Herman.” 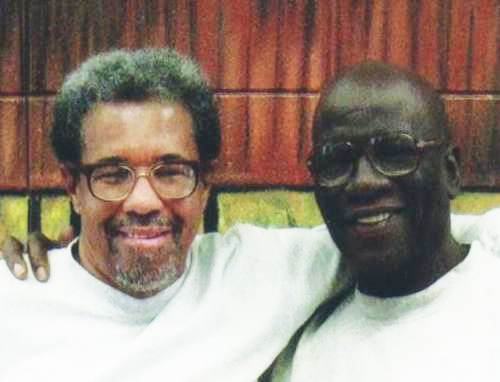 The importance of writing both Herman and Albert cannot be overstated. The Solitary Watch article reports on Albert’s visit last weekend with his brother Michael Mable, where Albert was very distraught over news of Herman’s health.

Exemplifying the punitive conditions that Albert continues to endure: “Mable was only able to see Woodfox through a glass partition, and Woodfox sat with his hands manacled and feet shackled while a captain and a lieutenant stood behind him, Mable said. Woodfox was strip searched, even though the interview was just a short way from his cell. He is allowed one visit a month.”

In another statement of support released on Monday, Amnesty International U.K.’s Urgent Action Network wrote: “This is heart-breaking news and everyone associated with the campaign remains shocked. But, taking our lead from the Angola 3, we are determined to fight, and we desperately need you to stand beside Herman, Albert and Robert at this difficult time. We need to put our collective voices together, louder than ever, and link arms with these men across the ocean.”

Further calling for letters to be sent to Herman and Albert, Amnesty U.K. declares: “One of Amnesty’s roles is to shine a light on injustice wherever it takes place. So I’m asking you to please shine the brightest possible light upon Louisiana, and to write postcards – preferably with a picture of your home town – to Herman and Albert. Please let them know that you are standing beside them at this difficult time. These letters will not only give much-needed support to Herman and Albert, but it will also show the Louisiana authorities that the world is watching them.”

We promise to keep you updated in the coming days as we learn more about Herman’s health and further develop our approach for best supporting both Herman and Albert. For now, please heed Amnesty International’s call to action and write to Herman and Albert today.

These letters will not only give much-needed support to Herman and Albert, but it will also show the Louisiana authorities that the world is watching them.

Address your cards to:

Writer and activist Marina Drummer has long been key to the Angola 3 support movement. She can be reached at marina@communityfuturescollective.org.