The two sisters, Helene and Celia Faussart, who make up the hypnotic neo soul group Les Nubians made a major breakthrough when their song “Makeda,” which is sung in French, hit the American pop charts a little less than a decade ago. Not since the reign of Sade in the ‘80s can I remember international music that attracted so much attention on U.S. soil. Hailing from Cameroon and France, Les Nubians have set up shop in New York City and have since left the record company plantations and gone independent. 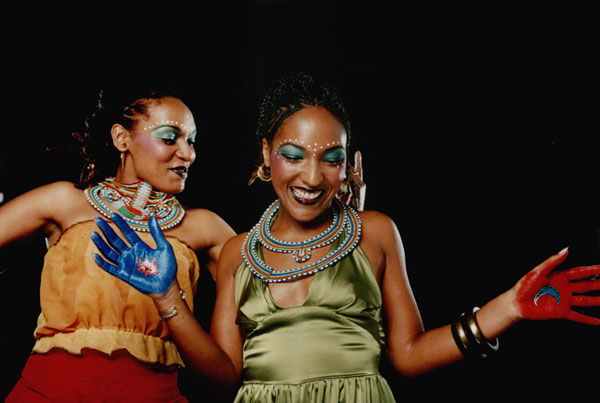 Promoting their album, “Nü Revolution,” these conscious musicians will be coming to the Bay Area on Thursday, Aug. 1, to perform at Yoshis in Oakland, on Friday, Aug. 2, they will be at Yoshis in San Francisco and on Saturday, Aug. 3, they will be headlining at Reggae on the River in Humboldt County. Check out the words of the sisters with the golden voices. This is an exclusive interview wit’ Les Nubians. Enjoy.

M.O.I. JR: Can you talk about how Les Nubians started? I know that you two are sisters. When did you figure that you would be a group?

Helene: We started doing music and singing together as kids. Our mother insisted also that we would get proper music and arts education when we were young, learning guitar, pottery or Indian dance instead of watching TV.

When we lost our father, singing together was a way to get together to comfort ourselves. We started performing a cappella on the impulse of friends who wanted us to share our songs with many. Working with a repertoire of Black music from African traditional songs to Blues, Zouk, Jazz and R&B, we wanted to explore the diversity of the Black diaspora through music. Les Nubians were born.

M.O.I. JR: What genre of music is your first love?

Helene: Afrobeat and Fela Kuti. I wanted to join his band and become one of his wives. I was 4 years old! I was moved by his music and the power of the chorus – female choir singing as one voice.

I don’t know if the message was clear to me, but I was so into it. The genius of the horns parts and arrangements sounded like vocals to me. I could also hear Jazz in it. Jazz. Another first love of mine I experienced with the music and early live show of Cameroonian saxophone master Manu Dibango.

Celia: Jazz. I first fell in love with the genre after listening to the legendary musical styling of Ella Fitzgerald, Louie Armstrong, Abbey Lincoln and Betty Carter. I love how the same story can be told and reinterpreted several times. I love how jazz is life – complex, yet simple and alive all at the same time.

M.O.I. JR: When did you start taking music seriously as a profession instead of a hobby? Why? What event or events happened that pointed you in that direction?

Helene: I can say that music was always a serious thing to us. We honored, loved and lived music. As activists, artivists, we recognize music as being an inspiring and powerful tool.

We were following the traditional way, being in college, following the path that our parents wished for us. Our Cameroonian mother used to say, “Be a lawyer and singer; be a doctor and a musician.” For many parents, the arts and music are not a serious career. Still studying, we were performing, doing opening acts for Neneh Cherry or The Roots, and we started doing professional TV backing vocals for artists like Warren G., until we were proposed a real recording deal for Les Nubians from Virgin France.

We waited that Celia would reach maturity to sign the recording contract, recorded the “Princesses Nubiennes” album and presented it to our mother!

She was surprised and wished us the best, prayed for us and supported us. She died in 2006, leaving her daughters to be accomplished and professional musicians and music business entrepreneurs.

M.O.I. JR: How would you define the differences between the sounds of Africa, the U.S. and Europe, all places that you have considered home?

Helene: Africa is roots music. It is music from the ground – rhythm and bass – towards the sky. It is spiritual; it is the expression of the eternal soul. The new African generation is re-initializing their roots interpretation, projecting Africa in the universal conversation.

European music is a sophistication of the mind utilizing medium and medium-high frequencies with experimental hubs, like London, which is an amazing scientific laboratory for all music. Brazilian and Caribbean music is the story telling of resisting and surviving using traditional tribes’ knowledge and cultures, transmitted and expressed with hope, love, optimism and compassion.

American music is a mix of all of the above as it is the New World – a fertile ground for all music genre meetings and experiments.

M.O.I. JR: In 20 years, how would you want your image and music to be remembered?

Helene: We want our music to be remembered as inspirational, not for anyone in particular, but for all – for babies and children to dream, for creators to create, for lovers to love, for people to heal.

M.O.I. JR: What is Les Nubians’ creative process like? Is there a process between the two of you that you use to create the beautiful music that you two sing?

Helene: The creative process in between sisters is quite mysterious. Our voices complement each other. When we harmonize, we kind of know instantly where the other will go.

I write most of the music. We also co-write with many artists like Piranha Head from Detroit, Mounir Belkhir from Marseille in France or Andres Levin from Yerba Buena. We also like to share pens with our brother John Banzaï, amazing poet and lyricist.

M.O.I. JR: What does Les Nubians mean? And why does your group carry that name?

Helene: LES is for “the” in French, NUBIANS is “from Nubia,” which is known to be the first Black civilization. It was a way for us to talk about the African diaspora in its entirety without having to specify, for example, that I’m Cameroonian, I’m Jamaican etc. It was a more global approach. In knowing who you are, you are then able to embrace universality. Les Nubians project is bigger than Helene and Celia.

M.O.I. JR: Can you tell us a little bit about how you two created your international hit “Makeda”? When did you do it? Where was it recorded?

I wondered a lot about this. I started writing the lyrics of “Makeda,” about African history and myths falsification, reminding that Black history IS my history, and so the Queen of Sheba lives in ME too.

The lyrics of “Makeda” came before the melody. We then received some music loops from Mounir Belkhir, and one was just perfect! We started building the melody and every word found its perfect place.

M.O.I. JR: How can people keep up with your music and your performances? 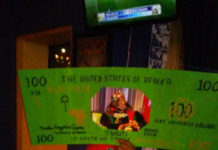 The death of Sister Soul