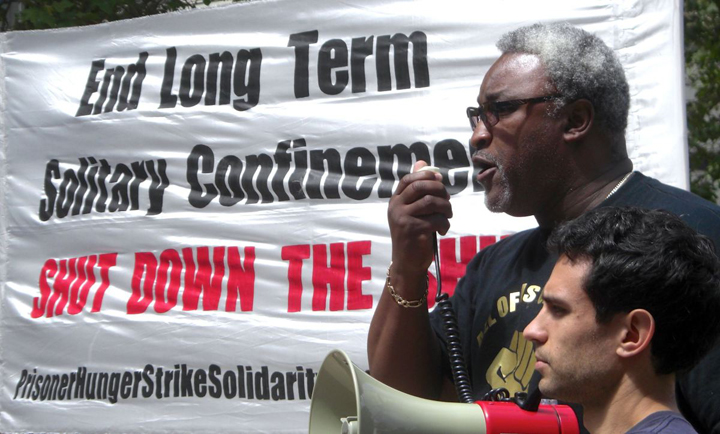 “Even if solitary confinement is applied for short periods of time, it often causes mental and physical suffering or humiliation, amounting to cruel, inhuman or degrading treatment or punishment, and if the resulting pain or sufferings are severe, solitary confinement even amounts to torture,” Mr. Méndez stressed as nearly 200 inmates in Californian detention centers approach their fifth consecutive week on hunger strike against cruel, inhuman and degrading prison conditions.

“I urge the U.S. government to adopt concrete measures to eliminate the use of prolonged or indefinite solitary confinement under all circumstances,” he said, “including an absolute ban of solitary confinement of any duration for juveniles, persons with psychosocial disabilities or other disabilities or health conditions, pregnant women, women with infants and breastfeeding mothers as well as those serving a life sentence and prisoners on death row.”

The independent investigator on torture and other cruel, inhuman or degrading treatment or punishment urged the U.S. authorities to ensure that “solitary confinement is only imposed, if at all, in very exceptional circumstances, as a last resort, for as short a time as possible and with established safeguards in place.” In Mr. Méndez’s view, “its application must be subject to independent review, and inmates must undergo strict medical supervision.”

“I urge the U.S. government to adopt concrete measures to eliminate the use of prolonged or indefinite solitary confinement under all circumstances.”

Since July 8, 2013, thousands of prisoners detained in nine separate prisons across the state of California have gone on hunger strike to peacefully protest the cruel, inhuman and degrading prison conditions. The inmates are demanding a change in the state’s excessive use of solitary confinement as a disciplinary measure and the subjugation of prisoners to solitary confinement for prolonged periods of time by prison authorities under the California Department of Corrections and Rehabilitation.

In California’s maximum security prison in Pelican Bay more than 400 prisoners have been held in solitary confinement for over a decade, and the average time a prisoner spends in solitary confinement is 7.5 years. “I am extremely worried about those numbers and in particular about the approximately 4,000 prisoners in California who are held in Security Housing Units for indefinite periods or periods of many years, often decades,” Mr. Méndez said.

In many cases inmates are isolated in 8-foot-by-12 foot cells and lack minimum ventilation and natural light. The prisoners are forced to remain in their cells for 22 to 23 hours per day, and they are allowed only one hour of exercise alone in a cement lot where they do not necessarily have any contact with other inmates.

In the context of reported reprisals against inmates on hunger strike and a district judge’s approval of Californian authorities’ request to engage in force-feeding prisoners under certain circumstances, the U.N. Special Rapporteur also reminded the authorities that “it is not acceptable to use threats of forced feeding or other types of physical or psychological coercion against individuals who have opted for the extreme recourse of a hunger strike.”

Mr. Méndez addressed the issue of solitary confinement in the U.S., including prison regimes in California, in his 2011 report to the U.N. General Assembly and in numerous communications to the government. He has also repeatedly requested an invitation to carry out a visit to the country, including state prisons in California, but so far has not received a positive answer.

“My request coincides with some prominent voices in the United States, including the first-ever congressional hearing chaired by Sen. Durbin on June 19, 2012; the decision to close Tamms Maximum Security Correctional Center by the State of Illinois on Jan. 4, 2013, and numerous editorials by prominent columnists in major papers addressing the excessive use of solitary confinement across the country,” Mr. Méndez said.

“It is about time to provide the opportunity for an in situ assessment of the conditions in U.S. prisons and detention facilities,” the U.N. Special Rapporteur underscored.

The U.N. Special Rapporteur reminded the authorities that “it is not acceptable to use threats of forced feeding or other types of physical or psychological coercion against individuals who have opted for the extreme recourse of a hunger strike.”

Juan E. Méndez of Argentina was appointed by the U.N. Human Rights Council as the Special Rapporteur on torture and other cruel, inhuman or degrading treatment or punishment on Nov. 1, 2010. He is independent from any government and serves in his individual capacity. Mr. Méndez has dedicated his legal career to the defense of human rights and has a long and distinguished record of advocacy throughout the Americas.

He is currently a professor of law at the American University – Washington College of Law and co-chair of the Human Rights Institute of the International Bar Association. Mr. Méndez has previously served as the president of the International Center for Transitional Justice (ICTJ) until 2009 and was the U.N. Secretary-General Special Advisor on the Prevention of Genocide from 2004 to 2007, as well as an advisor on crime prevention to the prosecutor, International Criminal Court, between 2009 and 2010.

To learn more, log on to http://www.ohchr.org/EN/Issues/Torture/SRTorture/Pages/SRTortureIndex.aspx. Check the 2011 report on solitary confinement, at http://daccess-dds-ny.un.org/doc/UNDOC/GEN/N11/445/70/PDF/N1144570.pdf?OpenElement or http://ap.ohchr.org/documents/dpage_e.aspx?m=103, and the U.N. Human Rights Country Page – United States of America, at http://www.ohchr.org/EN/Countries/ENACARegion/Pages/USIndex.aspx. For more information, contact Sonia Cronin at scronin@ohchr.org or Stephanie Selg at ssleg@ohchr.org or write to sr-torture@ohchr.org.