Sacramento – Mediators working on behalf of California prison hunger strikers concluded their meeting with CDCR Secretary Jeffrey Beard on Friday, Aug. 2. The meeting comes on the heels of nearly 100 family members of hunger strikers visiting the Capitol Tuesday, where they presented a petition signed by over 70,000 people demanding negotiations with hunger strikers to Gov. Brown’s office. 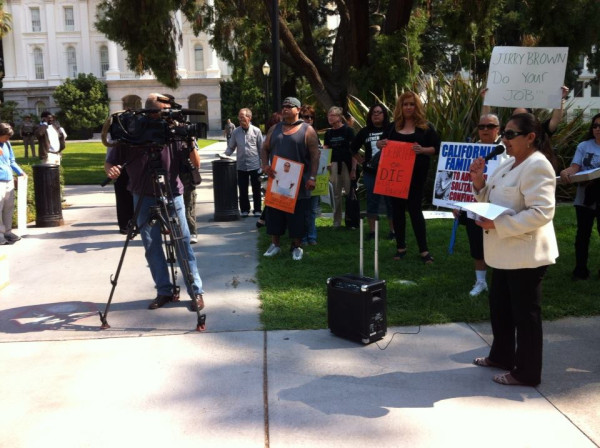 In a statement, the hunger strike mediators said: “We gave [Secretary Beard] ideas that would help bring the prisoners’ hunger strike to a just end in short order. We provided input for revisions to CDCR’s Security Threat Group Policy and Step Down pilot program. Our revisions are intended to create more humane conditions and circumstances. We urged him to follow the lead from other states, such as Illinois, Colorado and Mississippi, to end harsh and long term isolation practices.”

Support for the hunger strikers and pressure on Gov. Brown and the CDCR has continued to grow, with demonstrations happening nearly daily in cities across the country and the world. “The meeting with Beard is clearly a response to the commitment of hundreds of hunger striking prisoners and the tireless activism happening in support of the strikers,” says Kamau Walton, a spokesperson for the Prisoner Hunger Strike Solidarity Coalition. “The work of family members, their work in Sacramento, the pressure their mobilizing represents – this is what continues to be inspiring.”

The CDCR has taken an intransigent “no negotiation” stance to date. Advocates say the CDCR’s refusal to meet with family members, attorneys representing the hunger strikers and the strikers themselves indicates their unwillingness to end to this strike. “Lives hang in the balance, and honest negotiations and a legally binding agreement are the only things that can prevent further loss of life,” said Walton.

Also on Friday the Supreme Court refused to delay a court order for California to release nearly 10,000 inmates by year’s end to improve conditions in state prisons. The court rejected a plea from Gov. Jerry Brown who has argued that prison conditions have substantially improved and that circumstances have changed – this despite the massive actions of 30,000 prisoners who initially participated in the largest rejection in history of these official arguments.

“Lives hang in the balance, and honest negotiations and a legally binding agreement are the only things that can prevent further loss of life.”

In a letter received several days ago from Pelican Bay hunger striker Mutope Duguma, he said he’s lost over 40 pounds and is “getting smaller every day. I was a big muscular man and now the effects of the hunger strike are eating on my muscles now that all the fat has been fed on. I can feel it.” Duguma continues: “There are several who already fell out from [the] effects of the hunger strike and we have some who have been placed in the hospital and the prison specialty clinic. But there are many of us who will see this out to the end. We are still strong.”

Mediator Irene Huerta’s husband is on hunger strike along with Duguma in Pelican Bay. “My husband is one of the ones still not eating and it worries me,” says Huerta. “I am praying something positive comes out of today’s meeting. At the same time I admire our loved ones’ actions to end such horrendous conditions, and we will continue to fight the fight to end inhumane conditions even when the hunger strike is over.”