Oakland – As prisoners enter their 46th day of the massive California prison hunger strike, supporters continue to condemn Monday’s controversial court order that authorizes force feeding of strike participants and that disregards their medical wishes. According to lawyers just back from a visit to Pelican Bay, the order has emboldened prisoners to continue their strike, while others have decided to rejoin the strike in response to the California Department of Corrections and Rehabilitation’s (CDCR) attack. 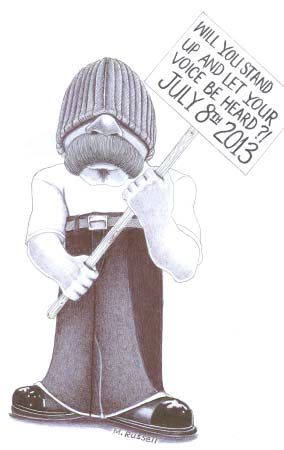 Attorney Anne Weills met with strikers in Pelican Bay Tuesday and Wednesday. “Although some have lost around 30 pounds and are getting significantly weaker, they are still very sharp intellectually and are still deeply united in their struggle for a life with dignity,” said Weills. “They are very much committed to their demands and are waiting for Gov. Brown to send someone to Pelican Bay to negotiate about those demands.”

Weills reported that prisoners were disturbed that the judge who signed the controversial order, along with the Prison Law Office and the Medical Receiver’s office, would align themselves with the CDCR’s political repression of the peaceful protest. Strike supporters are particularly disturbed and outraged that the order against strikers’ advanced medical directives (AMD) adds legal weight to the CDCR’s sensational – and largely unsubstantiated – propaganda that all strike participation is part of a gang conspiracy.

“This is an extraordinary political attack on the hunger strikers,” continued Weills. “It is even more absurd when a spokesperson for the Medical Receiver’s office stated that among the hunger strikers who have been starving since July 8, there are very few who have any advanced medical directives in the first place. So who is being coerced?

“There is not one shred of evidence that has been presented to Judge Henderson that anyone has been coerced to sign anything. Where are the declarations of such a person? Where is a declaration from a real hunger striker which states that they are being coerced? Is this a fraud being perpetrated on a federal judge who trusts the Plata plaintiffs’ attorneys? Why was there no evidentiary hearing?”

“This is a continuation of CDCR’s attacks on a nonviolent protest,” said Dolores Canales of the Prisoner Hunger Strike Solidarity Coalition. “We have seen this before. This is about dehumanizing the strikers, delegitimizing their demands and disrupting the widespread support for the protest coming from the community.

“But, as always, this will only cause the strikers, their loved ones and their supports to fight harder.” Amid CDCR’s latest stunts and Gov. Brown’s continued silence, strike supporters are continuing to put pressure on California politicians, demanding action from the state’s Public Safety Committee.

It seems that the CDCR’s plans have backfired as Weills reports prisoners are rejoining the strike. “As a result of recent events and Judge Henderson’s order, I was told yesterday that more than 50 people in the SHU at Pelican Bay are now going back on hunger strike,” said Weills. “From what I understand, that 50 may turn into 100 very fast, and that many have already been on rolling hunger strikes – going two weeks on and then two weeks off. This will all continue until an agreement is reached.”

Azadeh Zohrabi and Isaac Ontiveros are spokespersons for the Prisoner Hunger Strike Solidarity coalition. Ontiveros can be reached at (510) 444-0484 or isaac@criticalresistance.org.