In an Aug. 6, 2013, op-ed piece published in the Los Angeles Times, Jeffrey Beard, the secretary of California’s inaptly named Department of Corrections and Rehabilitation (CDC), cynically attempts to dehumanize a significant percentage of California’s population – i.e., the state’s incarcerated population – while making light of the grave human rights abuses perpetrated by the CDC. In response to the distortions or outright lies promulgated in Mr. Beard’s editorial, I am writing to address his claims point by point. 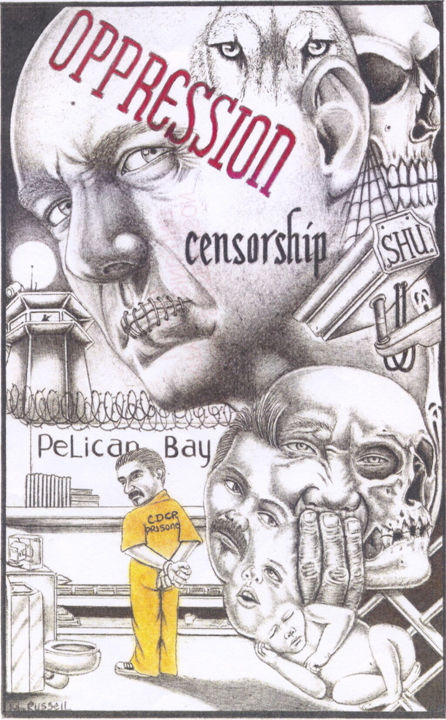 Mr. Beard’s claims made in the Los Angeles Times appear in quotes below; my responses follow.

“A few hundred inmates are continuing to take part in a hunger strike in California prisons.”

It is known that the CDC is VASTLY under-reporting the numbers of hunger strikers in an effort to undermine morale of the strikers and to undermine the gravity of their situation and the life-threatening conditions they face. People who take so much as a single tray/meal, or who briefly go off strike to regain their strength, are automatically taken off the strike list.

The same is true, for example, of Muslims, who are said to be observing Ramadan rather than striking, even if they refuse the evening meal, and of people who drink anything other than water, such as tea. At Corcoran, people report that a good two thirds or more of the largest demographic group within the prison are on hunger strike at any given time.

CDC is VASTLY under-reporting the numbers of hunger strikers in an effort to undermine morale of the strikers and to undermine the gravity of their situation and the life-threatening conditions they face.

“Many of those participating in the hunger strike are under extreme pressure to do so from violent prison gangs, which called the strike in an attempt to restore their ability to terrorize fellow prisoners, prison staff and communities throughout California.”

The most “violent” prison “gang” in California is the CDC. If Beard were to talk with a representative sample of hunger strikers rather than with select individuals who have been influenced or coerced to go against their brothers on the promise of release – or who have been broken by the CDC – he would learn that the strikers expressly deny his claim that they have been pressured to starve themselves. They are instead participating in support of the Five Core Demands and due to the deplorable and inhumane conditions imposed upon them overall – e.g., medical “care” that is more accurately described as physical assault, attempted homicide or homicide.

“I am concerned about the toll this hunger strike is taking on my staff, the inmates and their families.”

If Beard were genuinely concerned, then he would be doing all that he can to change the CDR’s unconscionable policies and practices, which represent a fundamental assault on human rights and dignity and are at their core genocidal. I can assure Beard that NOBODY is more concerned about the toll that the hunger strike is taking than the CDC’s captives themselves – who feel that they have no other recourse than to risk death to ameliorate their conditions – and their loved ones.

If Beard were genuinely concerned, then he would be doing all that he can to change the CDR’s unconscionable policies and practices, which represent a fundamental assault on human rights and dignity and are at their core genocidal.

“In one prison, an inmate was assaulted because he refused to share his food with striking inmates.”

Assuming that this is true (I can not, as the CDC has never proven itself to be as a source of accurate or meaningful information), it is scarcely reflective of the overall current situation in the state’s prisons – as evidenced by the fact that Beard has been forced to go on the defensive by the solidarity of those confined within the state’s prisons, and by public pressure to end the grave abuses perpetuated by the CDC.

“When gang violence exploded during the 1970s and 1980s, and crime rates around the state rose to record highs, state prisons felt the impact. Between 1970 and 1973, 11 employees of the California Department of Corrections and Rehabilitation were slain by inmates, and many others were brutally assaulted.”

Beard knows, or should know, that reported rates of violent crime have not generally increased in California at any time in the recent history – which is perhaps why he refers to the 1970s and 1980s. His reference to the years “between 1970 and 1973” is revelatory of the state’s agenda in taking preemptive extra-judicial action to suppress a population who otherwise might be incredibly influential (Cointelpro 2.0).

As for the 1980s, Beard neglects to mention the CIA’s, FBI’s and Department of Justice’s roles, respectively, in sponsoring and allowing to continue a crack epidemic which provided funding to the Contras in Nicaragua – and which immediately precipitated the passage of extremely punitive drug sentencing and “three strikes” laws – not to mention, an exponential increase of the number of people held in custody state- and nation-wide.

“[I]n response to the growing threat of gangs, the corrections department created SHUs to safely house gang members and their associates while minimizing their influence on other prisoners. Restricting the gangs’ communication has limited their ability to engage in organized criminal activity.”

Has Mr. Beard asked any captive in the SHU if he feels “safely” housed? Other than those whom the CDC has influenced/coerced on the promise of release, or has broken down physically and/or mentally? The CDC construes “restricting the gangs’ communication” as suppressing and retaliating against ANY expression of cultural identity or ANY expression of humanity towards a fellow captive or former captive. And it does so foremost to crack down on those who stand up for their own or others’ dignity and rights – i.e., resisters, activists and jailhouse lawyers.

Has Mr. Beard asked any captive in the SHU if he feels “safely” housed?

“[I]n California’s four SHUs, there are outdoor-facing windows in the cells that allow for direct sunlight. At Pelican Bay, all SHU cells have skylights. In all of the facilities, inmates in the SHU have radios and color TVs with access to channels such as ESPN.”

As Mr. Beard knows, or should know, the amount of light that prisoners are exposed to through plexiglass is minute and does not stave off vitamin D deficiencies. I am a person of largely northern European descent, yet my skin is more darkly pigmented than the skins of many Xicanos held by the CDC.

As for TVs and radios, Mr. Beard fully knows that the CDC is not in the business of providing these items to its captives. Such items must be purchased – and are not purchased by the CDC, but by those held captive, with the inevitable assistance of loved ones. In the meantime, it is known that certain channels or stations are sometimes made unavailable to the CDC’s captives due to political content.

“They have weekly access to a law library and daily exercise time. Many have cellmates; they can earn degrees; they can send and receive letters; and their family and friends can visit them every weekend. SHU inmates receive the same meals and portions as general population inmates.”

As Mr. Beard knows, or should know:

“We no longer commit people to indeterminate placements in SHUs, in which the terms have no end dates. And we are committed to providing less restrictive housing and more privileges for inmates who demonstrate their willingness to refrain from gang behavior.”

“[We] are conducting case-by-case reviews of inmates who had been previously given indeterminate terms in SHUs. To date, we have completed 399 reviews, and about 62 percent of those whose cases have been reviewed have been transferred or are about to be transferred back into the general prison population.”

Sixty-two percent of 399 people is a minute percentage of California’s incarcerated population. Bear in mind that on any given day the TOTAL population of those in solitary confinement in California is 12,000. Moreover, what does it mean if a person is returned to the general prison population, if he can be returned to the SHU at the whim of prison officials?

“So what is this really about? Some of the men who participated in the last hunger strike have … said it best in recently filed court declarations. ‘Honestly, we did not care about human rights,’ one inmate said about the 2011 hunger strike. ‘The objective was to get into the general population, or mainline, and start running our street regiments again.’”

This is about fundamental human rights and dignity – however Beard wants to spin it. Selective quotes from people whom the CDC has managed to influence, break down or coerce can’t change this!

This story first appeared on Indybay.