Sacramento, Aug. 30, 2013 – Today Sen. Loni Hancock and Assemblymember Tom Ammiano announced that they will hold public hearings on the conditions in California prisons that have led to the inmate hunger strike, now in its 54th day. They anticipate that hearings may begin as early as this fall and continue into next year. 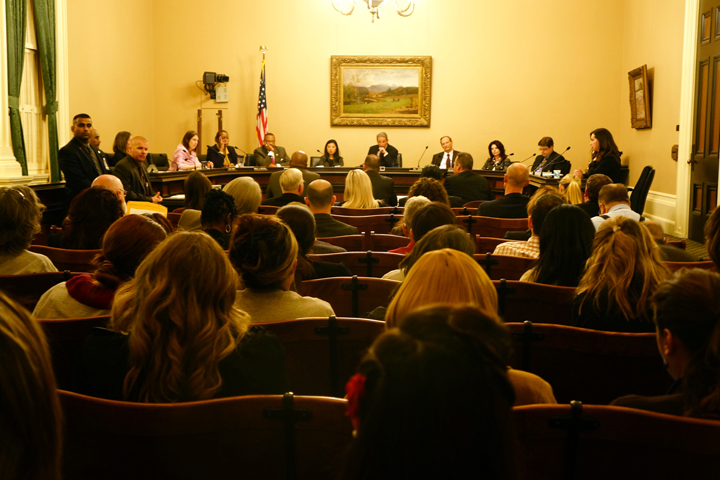 “The issues raised by the hunger strike are real – concerns about the use and conditions of solitary confinement in California’s prisons – are real and can no longer be ignored,” Sen. Hancock, D-Berkeley, and Assemblymember Ammiano, D-San Francisco, said in a joint statement.

The hearings will focus on two key issues raised by the hunger strike:

1. The conditions of confinement in California’s maximum security prisons

On April 9, 2013, a U.S. District Judge ruled in a class action law suit that inmates being held in solitary confinement, sometimes for decades, had adequately demonstrated that the state of California may be denying them protection from cruel and unusual punishment and granted the plaintiffs the right to a trial.

Assemblymember Ammiano stated: “The courts have made clear that the hunger strikers have legitimate issues of policy and practice that must be reviewed. The Legislature has a critical role in considering and acting on their concerns. We cannot sit by and watch our state pour money into a system that the U.S. Supreme Court has declared does not provide constitutionally acceptable conditions of confinement and that statistics show has failed to increase public safety.

2. The effect of long-term solitary confinement as a prison management strategy and a human rights issue

Sen. Hancock stated: “California continues to be an outlier in its use of solitary confinement, which has been recognized internationally and by other states to be an extreme form of punishment that leads to mental illness if used for prolonged periods of time. Since many of these inmates will eventually have served their sentences and will be released, it is in all our best interest to offer hope of rehabilitation while they are incarcerated – not further deterioration.”

The legislators cited a report by Juan E. Méndez, the United Nations Special Rapporteur on torture, “Even if solitary confinement is applied for short periods of time, it often causes mental and physical suffering or humiliation, amounting to cruel, inhuman or degrading treatment or punishment, and if the resulting pain or sufferings are severe, solitary confinement even amounts to torture.”

They also referred to the 2006 report of the Commission on Safety and Abuse in America’s Prisons, a bipartisan national task force. The report found that between 1995 and 2000, the use of solitary confinement in the United States had increased by 40 percent, far outpacing the 28 percent growth rate of the overall prison population. The Commission also found that solitary confinement is counterproductive to public safety and costs twice as much as imprisonment in the general population. The Commission recommended ending long-term isolation of inmates.

The legislators noted: “The concerns have been heard by the courts and will also be heard by the state Legislature. We take our responsibility as policy-makers for the state of California very seriously and intend to address the issues that have been raised to a point where they can no longer be ignored.”

The two legislators, chairs of the Senate and Assembly Committees on Public Safety, urged an immediate end to the hunger strike so that energy and attention can be focused on the issues that have been raised. “The inmates participating in the hunger strike have succeeded in bringing these issues to the center of public discussion and debate,” they said. “Legislators recognize the core concerns raised by the inmates and their supporters, and need no further sacrifice or risk of human life.”

Carlos Alcalá, communications director for the Office of Assemblymember Tom Ammiano, can be reached at Carlos.Alcala@asm.ca.gov or (916) 319-2017.

by Azadeh Zohrabi and Isaac Ontiveros

“We appreciate Sen. Hancock and Assemblymember Ammiano’s promises to take action. Ultimately it is up to the hunger strikers’ themselves as to when and how they will end their protest. But as their advocates on the outside, we feel positive about today’s developments,” said Dolores Canales, who is a member of the strikers’ mediation team and whose son is in Pelican Bay.

“Ultimately it is up to the hunger strikers’ themselves as to when and how they will end their protest.” – Dolores Canales, mother of a Pelican Bay SHU prisoner

Hancock and Ammiano’s statement represents the strongest steps forward in addressing the prisoners’ peaceful protest, and advocates and lawyers representing the strikers say they are eager to communicate this development to the prisoners.

“The prisoners on strike have always been clear that there is a viable pathway toward resolving the crisis created by the CDCR,” said Anne Weills, a civil rights attorney representing some of the hunger strikers at Pelican Bay. “I look forward to talking to hunger strike representatives at Pelican Bay to get their thoughtful input around Sen. Hancock and Assemblymember Ammiano’s proposal.”

As advocates work to communicate with prisoners on strike around this development, they are also encouraging a cautious attitude. “The strike is not over yet and it is still at a very dangerous moment, given that we are entering a long weekend where people have gone 54 days without eating,” said Marie Levin, whose brother is one of the four main strike representatives locked in Administrative Segregation at Pelican Bay.

“The strike is not over yet and it is still at a very dangerous moment, given that we are entering a long weekend where people have gone 54 days without eating.” – Marie Levin, sister of a Pelican Bay SHU prisoner

“We hope that the CDCR will not act to disrupt this potentially positive development by spreading false information to strikers or continuing to retaliate against their peaceful protest.”

Lawyers visited New Folsom Prison north of Sacramento yesterday where they discovered nearly 80 Pelican Bay strikers had been relocated. They reported that health conditions are poor but that many are still on strike. Some prisoners that had come off strike have resumed the protest due to mistreatment at that facility. Lawyers also reported that other prisoners at New Folsom also joined the protest when they learned of the mistreatment of their fellow prisoners from Pelican Bay.

Concern for the strikers and condemnation of the CDCR is spreading internationally. Earlier today Tessa Murphy, Campaigner on the USA at Amnesty International, said, “It’s nothing short of appalling that instead of dealing with the complaints, California’s prison authorities have chosen to threaten inmates with force-feeding and disciplinary measures and have moved some to other facilities.”

Meanwhile the California Conference of Catholic Bishops said they would “again extend our offer to Gov. Brown and Dr. Jeffrey Beard, secretary of the Department of Corrections and Rehabilitation (CDCR), to assist in the resolution of this urgent life threatening situation. We offer to serve Gov. Brown and Dr. Beard on any outside oversight committee that may be convened to investigate any alleged human rights violations in the California’s prisons in order to propose the necessary corrective measures.”

Isaac Ontiveros and Azadeh Zohrabi are spokespersons for the Prisoner Hunger Strike Solidarity coalition. Ontiveros can be reached at (510) 444-0484 or isaac@criticalresistance.org.