Paul Robeson is one of the early thespians, singers and human rights freedom fighters from the United States whose ideas paved the way for people like Medgar Evers, Harry Belafonte, Malcolm X and others. He was a multi-linguist who performed all over the world when most Black people were engaged in the great migration from the plantations of the South to the northern cities. Paul Robeson was targeted by the United States government because of his radical ideals and barred from performing in the U.S. decades before Muhammad Ali. 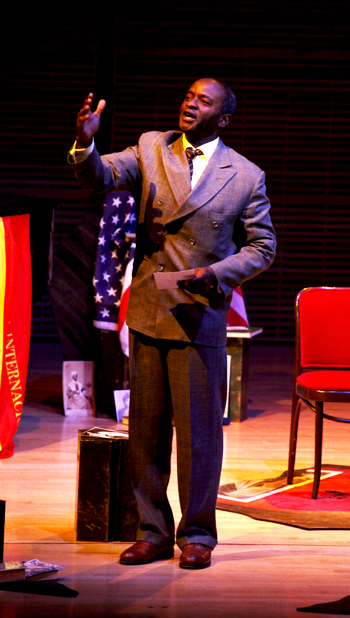 Tayo Aluko, a Black British playwright and actor, will bring his play, “Call Mr. Robeson: A Life With Songs,” to the Freight and Salvage Coffeehouse on Sunday, Aug. 11, at 8 p.m. in Berkeley. Check out this exclusive Q&A wit’ the playwright.

M.O.I. JR: Can you tell the people how you became aware of the late great Paul Robeson?

Tayo Aluko: I was singing at an event in Liverpool, U.K., where I live, in June 1995. The song I sang was the spiritual “My Lord, What a Mornin’.” A lady said afterwards that I reminded her of Paul Robeson and wondered if I sang many of his songs. That was actually the first time I had heard of him, and then two months after that, I stumbled upon his biography by Martin Bauml Duberman at Liverpool library, and that changed my life.

M.O.I. JR: Did you write the play? How have people responded to your play?

Tayo Aluko: Yes, I wrote it, after years of research and unsuccessful attempts to find more experienced playwrights to take it on. The response to the play worldwide has been universally very positive. Most people were aware of Robeson as an artist, but not as an activist and civil rights pioneer.

His life also spans so much world history, politics and geography that the story goes down well everywhere. There is also of course the thing he said time and time again – that music is a universal language, so people are also moved by my performance of the songs.

M.O.I. JR: What is the importance of Paul Robeson to American and world history?

Tayo Aluko: He was one of the first people to see and say that the struggles of African Americans were linked to those of working and oppressed people worldwide. Decades before Malcolm X would discover that not all white people were enemies of Blacks, Robeson was celebrating the brotherhood of man and the need for all people to unite to fight for peace, justice, human rights and equality worldwide. He travelled so widely and was interested in the struggles of so many people worldwide that his legacy is felt far beyond the shores of the USA.

M.O.I. JR: What is the importance of theater in a society?

Tayo Aluko: Being in the same space as a performer or group of performers telling stories is a very raw, direct experience that has the ability to move and inspire people of all ages in ways that many other media can’t.

Is there a balm in Gilead?