The revolutionary Hugo Chavez was a political giant in the Western Hemisphere until his untimely death from cancer. Many, including some inside his government, believe it was given to him by the United States government earlier this year.

Chavez is admired internationally because of his willingness to stand up to the imperial powers, most notably the United States, which, through the Monroe Doctrine, acts as if all the Americas are its “backyard.” He is admired inside of his country because of how he has used Venezuela’s immense oil wealth to help the poor with educational and health programs. 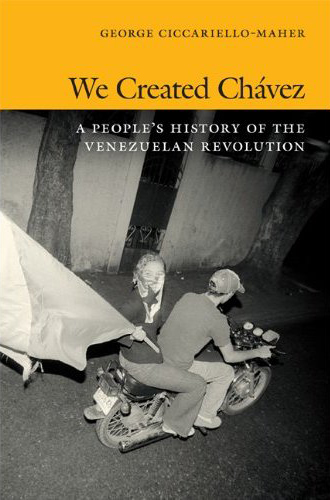 Black people from the United States like myself remember when he offered victims of Hurricane Amerikkka aka Katrina free oil to alleviate the devastation of their lives and land along the Gulf Coast. We must continue to learn from the people of Venezuela about the revolutionary process that they have enacted. We also need to continue to study the revolutions going down currently in Ecuador, Bolivia, Nicaragua, Chiapas and Cuba, just to name a few of the national movements that are stamping out imperialism in the Western Hemisphere.

Check out Drexel University professor and author George Ciccariello-Maher as he discusses Venezuela, the late great Hugo Chavez and his new book, “We Created Chavez.”

M.O.I. JR: What inspired you to write a book about the history of Hugo Chavez and the revolutionary people of Venezuela? Where did you get the title from?

George: I moved to Venezuela in 2006 to try to understand what was really going on. Even today, there’s not much accurate press coverage of Venezuela in the U.S., but I could tell I was only getting part of the story and that something interesting seemed to be going on. Once in Caracas, I managed to get a job at a revolutionary planning school teaching young organizers from across the country, and this gave me an insider’s view of Venezuelan revolutionary movements. The more time I spent there, the more this side of the story, the side of the movements and the revolutionary grassroots, seemed to be of prime importance but systematically neglected.

The title comes from a well-known revolutionary militant and organizer of popular militias in western Caracas, Juan Contreras, someone who spent decades persecuted, hunted and jailed by previous governments and who now supports the revolutionary process. He helps to run the Simón Bolívar Coordinator, whose location is itself symbolic: Once an outpost for police repression and torture, the police were sent packing a few years back and now the Coordinator helps to manage local security. This is one very concrete way that “we” (the movements) “created Chávez.”

George: In the Western media, we get the idea that Chávez was a classic caudillo, a Latin American strongman who leads with a combination of brute force and charisma. A key part of this narrative is the idea that Latin Americans are the stupid pawns of power, while (North) Americans are rational. This lens is never reversed, of course, because if it were, we would see that there is nothing more empty and charismatic than Obama’s election on a vague platform of “hope and change.”

Venezuelans are not dumb, but it’s true that many did and continue to identify powerfully with Chávez, not for the quasi-religious reasons that the press also likes to push, but for historical reasons. Chávez symbolized the destruction of the old system of corrupt representative two-party democracy, and he shot to prominence when he and others attempted to overthrow that system in a February 1992 coup. When the coup failed, Chávez went on national television and said they had only been defeated “for now,” essentially promising that the fight wasn’t over.

M.O.I. JR: What is the Bolivarian Revolution? Beyond the revolutionary rhetoric, what is the role of everyday people and social organizations?

George: I would say there are two basic aspects of the Bolivarian Revolution that emerged in different stages. The first was a dramatic increase in the social welfare of the poor through the direct investment of oil wealth to fund free health care, free education through the university level, the elimination of illiteracy, reductions in infant mortality and a massive reduction in poverty, among many other aspects.

Even more important, it still is very unfinished; it’s the second aspect or phase of the revolution, which entails the radical transformation of participation, democracy and the state. The Venezuelan people have become active participants in many aspects of their government, with directly democratic councils making many local decisions, workers taking over and running factories and others coming together to form cooperative structures. The old, corrupt state still looms, however, and the revolution won’t be able to move forward unless it presses on with the expansion of popular power.

George: These revolutions all have their own particular historical and social contexts but nevertheless are related in important ways. Speaking first historically, we could say that the Cuban revolution provides a historical background for all the others, inspiring many young revolutionaries by telling them they didn’t need to sit around and wait for “objective conditions” to ripen, that they could intervene in history directly.

But the Cuban example is also a cautionary tale: No one wants to end up in the sort of embattled situation of Cuba, and there are ways that this situation has hindered the creativity of the Cuban process, so even with the Sandinistas you saw an attempt to come to power and rule in a more hybrid way, using elections. This attempt was of course crushed by the military and financial intervention of the United States.

Speaking now to the present, those involved in the processes underway in Venezuela, Bolivia and Ecuador are sharply aware of this history, and this explains in many ways their insistence on elections and on attempting radical or even revolutionary change through the process of rewriting constitutions in increasingly radical ways. Of the three, Venezuela has seen a more consistently powerful alliance between government leaders and revolutionary movements, whereas both Evo Morales in Bolivia and especially Rafael Correa in Ecuador have burned some important bridges with revolutionary groups that threaten to slow the pace of change.

M.O.I. JR: How will the Bolivarian revolution be affected by the death of Chavez? What is the history of the current president of Venezuela, Maduro?

George: I think many of us expected a change but have been seriously caught off-guard by just how important Chávez was to the process. While the process was driven from below, Chávez was the cement that held the process together and managed to unite its separate parts, and it’s not clear yet if Maduro will be able to do this. His margin of victory over the opposition in April was tiny 1.8 percent.

There are today millions of organized, mobilized and conscious Venezuelans who are now on their feet and have no plans to get back on their knees.

Maduro does have an extensive history in revolutionary movements and is toward the radical end of Chavismo but was also clearly chosen by Chávez for his ability to build bridges rather than burn them. The opposition is now doing whatever they can to take advantage of Maduro’s weak position by sabotaging the economy and blaming it on the government, refusing to recognize what were clean and fair elections and preparing to recall Maduro after three years in office.

M.O.I. JR: How long did this book take to research and write?

George: I began to conceive the book in 2007 while living in Venezuela and writing regular pieces for Counterpunch, and, after moving back to Oakland, I returned to Venezuela in 2008 with the excellent photographer Jeff St. Andrews to do more research and travel across Venezuela interviewing revolutionary organizers, militia leaders, former guerrillas, Afro and Indigenous leaders, and student and women’s leaders for the book.

I had to set it aside a couple times to finish my dissertation and move to Philadelphia, but by 2011 it was finished and moving into the very slow publication process. The fact that it eventually came out only weeks after Chávez died was a complete coincidence, but with all the interest in Venezuela, I was glad to have the opportunity to correct the record from the perspective of revolutionary movements.

M.O.I. JR: How did the government of Venezuela respond to a white American university professor doing research on Chavez for a book to be published in America?

George: On the one hand, lots of Venezuelans are rightly suspicious of foreigners and gringos especially, but there is also a powerful spirit of international solidarity that is the legacy of historical struggles in Venezuela and Latin America as a whole. If anything, it was the more conservative and bureaucratic elements within Chavismo that showed more resistance, deploying a vulgar bourgeois nationalism to cover for their own questionable policies. 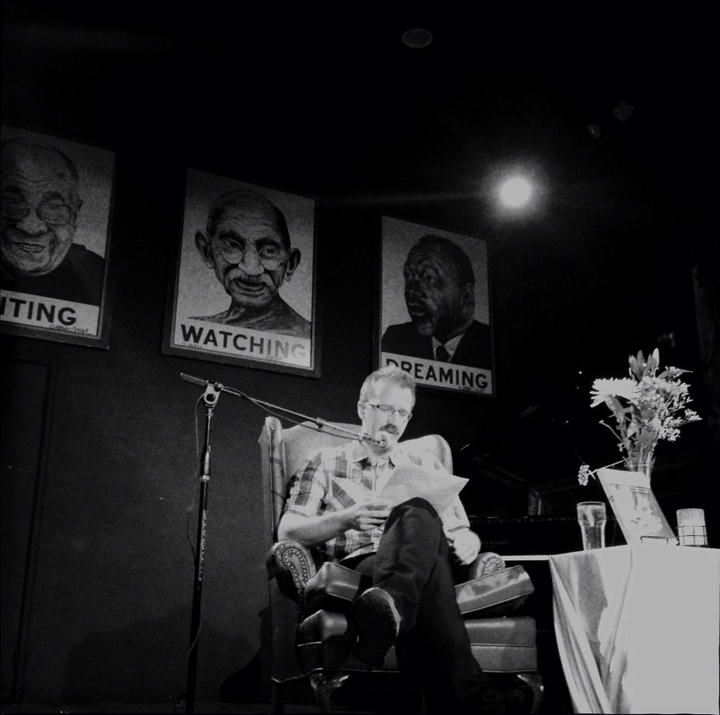 But the Venezuelan government is also chock full of hardcore revolutionaries, former guerrillas and student militants who spent most of their lives in hiding, and these people are more than happy to finally have their story told for an international audience. A number of Venezuelan government agencies and embassies abroad are now collaborating to make sure that the book is translated, first into Spanish and Arabic, and published worldwide.

M.O.I. JR: What does the future hold for Venezuela?

George: That’s the million-dollar question! It’s dangerous to speculate, but once we refocus our lenses toward grassroots revolutionaries, we see that one of the main challenges facing Maduro will be within Chavismo, reconciling the far left with the moderates, while the job of the far left will be to push the process ever faster and deeper.

All the while, the opposition will be snapping like the U.S.-funded crocodiles they are, hoping to defeat the revolution with the ballot or the bullet. But if they do, there are today millions of organized, mobilized and conscious Venezuelans who are now on their feet and have no plans to get back on their knees.

M.O.I. JR: How can people keep up with your book signings? And where can they purchase your book?

George: People can buy “We Created Chávez” directly from Duke University Press and for Kindle from Amazon.

After launching the book with readings in New York and Washington, D.C., this spring, I hope to set up a West Coast tour in the fall. The best way to keep up with me is on Twitter (@ciccmaher) or by liking the book’s Facebook page (https://www.facebook.com/wecreatedhim).