I’m writing on behalf of the Fresno County Main Jail, Sixth Floor, C-Pod inmate population. There are about 48 of us. We are all Northern Hispanics. 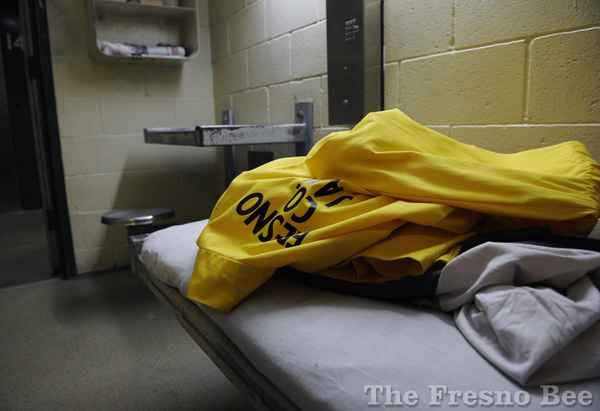 We wish to express our solidarity and support of the July 8th hunger strike the Short Corridor representatives and all those righteous individuals slammed down in SHU solitary confinement who refuse to break or fold under the weight and tactics of CDCR’s oppressive system. Many in this pod are “validated” according to CDCR’s faulty labeling of its inmates and have also done time in Pelican Bay.

On July 8, all of us will be participating in the hunger strike in support of the five core demands and also to contest our own living conditions and treatment here in Fresno County Jail. Beginning in January of this year our full program was taken away and we were all placed on lockdown although none of us received any write-ups or rule violations. This itself violates our due process rights protected by the U.S. Constitution.

Then in March we were relocated to another pod where the ventilation doesn’t work, so now we are locked down in triple digit heat, in a cell with three grown men and vents that don’t work. All combined, we have submitted over 300 inmate grievance forms, most of which remain unanswered, attempting to have our due process and equal protection rights restored, as all other inmates who are disciplinary-free are allowed open programs, but we are unjustly being locked down and targeted due to our classification label.

On July 8, all of us will be participating in the hunger strike in support of the five core demands and also to contest our own living conditions and treatment here in Fresno County Jail.

Now in order to take a stand and challenge the mistreatment and abuse of this corrupt system we turn to peaceful protests in the form of the hunger strike beginning Monday, July 8. With that said we humbly step back.

This is a follow-up letter regarding the hunger strike at Fresno County Jail (FCJ). After nine days on the hunger strike, the administration here at FCJ wanted to end the strike and met our demands. At the time the administration had us on a modified program, top tier out one day – bottom tier on lock-down that day, vice versa in a 48 man pod that was all classified as Northern Hispanic.

Now we have full program – meaning we are out of our cells all day long – and are now mixed with Whites, Blacks, Asians, Indians and Paisas. This is a huge victory and accomplishment for us all.

After nine days on the hunger strike, the administration here at FCJ wanted to end the strike and met our demands.

Here, we tip our hat to those still on the hunger strike. We still are doing our part by spreading the word about the hunger strike petition, so we can help those in Pelican Bay get their signatures and help them achieve their goals and objectives. Hopefully our situation can serve as an example.

Due to some of us coming from Pelican Bay, Corcoran etc., most of us are validated as Northern Structure, Nuestra Raza, Nuesta Familia. This is why FCJ kept us separated from the general population.

We have been given the opportunity to program in a general population setting and everyone is getting along with no problems whatsoever.

By us pushing the necessary paperwork and joining in and supporting the nationwide hunger strike, it allows us here to be placed in general population. This should be the avenue CDCR takes in releasing those in solitary confinement to end the hostilities at Pelican Bay and every other SHU housing unit throughout the nation.

Look at us for example. We have been given the opportunity to program in a general population setting and everyone is getting along with no problems whatsoever. FCJ released us (Northern Hispanics) out of our Ad-Seg modified program. We are now programming and enjoying every minute of it with all the other ethnic groups that are housed here.

This is something that FCJ thought would never happen. We have proved them wrong once again.