by Diana Zuñiga, Californians United for a Responsible Budget

Los Angeles – On Wednesday, faith, health and human services, housing, education and criminal justice reform advocates will have a press conference and rally at the State Building, 300 South Spring St., calling on the Legislature to immediately reduce the prison population and invest tax dollars in programs that create healthy and safe communities. It will also address the fact that many prisoners have been told that they will be moved out of state through a memo that the California Department of Corrections has been circulating as of last week.

“I feel devastated at the thought of my husband being sent so far away from me when we already struggle to afford to see each other in the same state,” said Taina Vargas-Edmond. 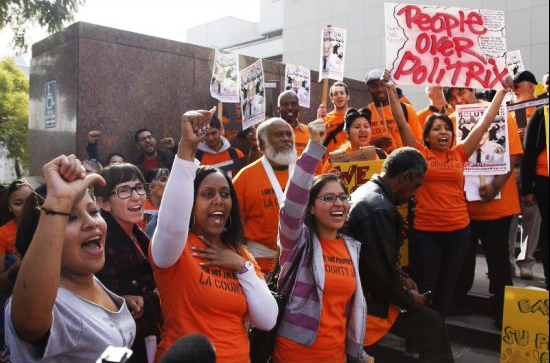 “I am enraged that Jerry Brown feels he has a right to try and destroy my family, and that he pretends it is in the interest of protecting people. If he really wanted to protect the public safety, he would keep California prisoners in their rehabilitative programs here and help keep their family support structures strong so that, when released, prisoners have true opportunities to turn their lives around.”

Under a new deal, the governor’s plan to shift California’s prison population out of state and to private facilities will go forward, but only if federal judges do not afford the state additional time to address its prison overcrowding crisis. If the state does get the additional time, however, then it will invest in diversion and recidivism-reducing programs with the funds that would have been spent expanding prison capacity.

“Gov. Brown pledged that Prop 30 funds would be used to lift our children up, not keep our people incarcerated and punish our communities in this way. This is a moral failure, not just a policy failure,” says Rev. Leonard B. Jackson of Justice Not Jails.

At the rally, advocates will urge the legislature to continue to raise questions about Gov. Brown’s “Plan B” and instead implement cost effective population reduction strategies and sensible alternatives to incarceration, rather than spend tax dollars on additional, unnecessary beds.

Advocates, lawmakers and allies will urge legislators to instead protect the reserve to fund a critical social safety net, education and other vital programs that California’s families need to eliminate poverty, recover from the Great Recession and succeed.

“Gov. Brown pledged that Prop 30 funds would be used to lift our children up, not keep our people incarcerated and punish our communities in this way. This is a moral failure, not just a policy failure,” says Rev. Leonard B. Jackson of Justice Not Jails.

“We will continue to raise strong concerns around any budget raid that will go towards funding prisons at the expense of rebuilding many other services and programs, early care and education amongst the list,” said Martin Castro, president and CEO of the Mexican American Opportunity Foundation and chair of the Los Angeles Child Care Alliance. “We need our cuts to be restored and do not want such pivotal social programs to suffer the consequences.”

Diana Zuniga of Californians United for a Responsible Budget (CURB) can be reached at diana@curbprisonspending.org.