by Tiny, aka Lisa Gray-Garcia, daughter of Dee, mama of Tiburcio, poverty skola

“Can you guarantee there will be housing for low, low income people, ‘cause many of our folks are low, low income?” The inquiry from San Francisco Public Housing Commissioner Patricia Thomas was tentative, her voice building power with each word.

“RAD is an integrated model that preserves affordable housing,” replied Olson Lee, representative of the Mayor’s Office of Housing, in a careful monotone.

“Mr. Lee, you are not answering my question: Is the Mayor’s Office guaranteeing that there will be housing for low, low income people, or, like one of the public commenter said, will we be gentrified out of our own communities?” 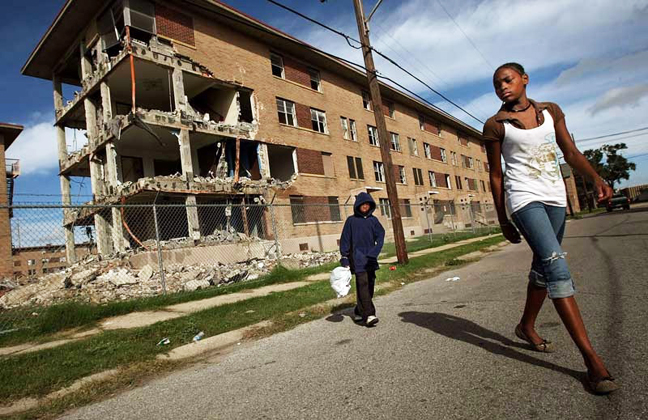 The San Francisco Housing Commission meeting of Sept. 4 on a new acronym called Rental Assistance Demonstration (RAD), code for selling public housing to private investors, was still. Still like a grave. A grave for all us poor people destroyed by the massive privatization of our public housing. Us unprioritized and barely housed, the holding-on-by-our-fingernails families, the forgotten elders and disabled folks, the very poor, the displaced, now houseless and rarely remembered.

I was the public commenter Ms. Thomas referenced who brought the deadly G word, Gentrification – or what we at POOR affectionately call GentriFUKation – into the tomb-like room. After listening to an onslaught of thinly veiled lies presented by the Mayor’s Office of Housing (MOH), cloaked in feel-good titles like San Francisco Housing Authority Revisioning, projected as power-point presentations using more confusing terms like outcomes and clusters and littered with more acronyms than the mind could begin to unpack, my body was shaking with fury and betrayal.

Sadly, this was nothing new. POOR Magazine poverty skolaz have been writing, WeSearching and protesting this mess since our inception. There was just a deeper arrogance about the theft than we have seen before.

“He (Olson Lee) can’t guarantee it. They are selling public housing stock off to private investors as mortgages, so of course they can’t guarantee what private investors do with their investments,” said Paul Boden. I called Paul from Western Regional Advocacy Project (WRAP), who has done extensive research on the destruction of public housing for poor peoples in the U.S. to get some truth beyond the acronyms.

One of the statements that is continually used by politricksters about public housing is the “obvious need for a solution to the problem of public housing.” The truth is, according to WRAP’s “Without Housing” report, beginning as far back as the 1960s when then President Nixon put a federal moratorium on the building of HUD’s affordable housing (aka poor people housing) the government sponsored gentriFUkation plans have been rolling out one brutal slice at a time making sure that the New Deal idea of public housing for all became a “failure.”

Throw in rampant redevelopment across the nation that has hit the Black community more deeply than any other folks, the implementation of the paper-based mythology of the Section 8 program which has never been a guarantee of housing and has already lost over 300,000 units to foreclosure and opt-outs since the ‘90s and is currently barely surviving the so-called sequester hits. Combined with the demolition of over 200, 000 units of public housing, you have a planned government-baked recipe for the end of public housing.

Shuttled in with the benign title of Rental Assistance Development, or RAD, a series of last minute, so-called “community” meetings are being held in the public housing projects that will be bought and sold right out from under us, claiming they will be improving our lives and communities by displacing us, just like every redevelopment project has done since its inception such as Fill-no-more – now renamed Western Addition – in San Francisco to the Brooklyn gentriFUKation of the ‘70s to Phoenix, Arizona’s Joe Arpaio-funded destruction of poor people hotels downtown in the ‘90’s to almost any city you can name in Amerikkka.

But the reality is, the developers are running out of communities to gentriFUK, so the next frontier is turning all of our public housing into private so-called “affordable” housing, with the complicit involvement of corporate government forces like the Brown, Newsom, Lee, Quan, Villaraigosa, Bloomberg, administrations of San Francisco, Oakland, LA, New York and beyond.

Shuttled in with the benign title of Rental Assistance Development, or RAD, a series of last minute, so-called “community” meetings are being held in the public housing projects that will be bought and sold right out from under us, claiming they will be improving our lives and communities by displacing us.

“In the last four months, over a hundred representatives from 72 different organizations including residents, non-profit service providers, affordable housing developers, local labor unions and private sector development experts along with 20 city departments and representatives from HUD have met a total of 18 times,” reports the SFHA in its Revisioning Process Recommendations.

“We have had multiple meetings in the communities leading up to this application,” said Naomi Kelly of the Mayor’s Office of Housing.

That’s funny, I thought, neither myself nor any of our POOR Magazine family who are currently living in public housing units have got notices of these so-called tenant meetings – or any meetings about this for that matter.

The City of San Francisco has a deadline to “apply” for RAD – aka public housing’s collective destruction – of Sept. 30 and we are all caught up in a wave we barely understand. With false “urgency,” the politricknologists have launched a whole slew of meetings with little or no notice scheduled so as to ensure that hardly any poor, disabled, elder or working folks can attend. This take-down in the night is also possible ‘cause so many of our backs, souls and spirits are broken by years of race and poverty hits, post-traumatic slave syndrome and the lie of capitalism in Amerikkka.

The other glaringly obvious part of these private developments is their colonizer work crews who are flown in like the 21st century carpetbaggers they are to take the jobs on the construction sites that ought to belong to the people who live there.

“These developments are in our communities. Why aren’t they hiring us in the community,” said Fly Benzo, Hip Hop youth skola, media producer and revolutionary Bayview son of Claude Carpenter, a leader in the building trades based in the Bay View. Fly, Claude, Mary and Willie Ratcliff and many others have been speaking truth to this colonizer situation for years, and yet the construction bids keep magically going to anyone but local folks. Fly’s powerful statements were caught in the new movie, “Let Um Hear Ya Comin,” by revolutionary comrades Black Riders Liberation Party.

“My family has been living in the Fillmore public housing projects for over five generations. Where is our equity?” said Queenandi XSheba, fellow poverty skola reporter, poet and welfare QUEEN at POOR Magazine.

In the end it is up to us, family, to take back our 1/16th of an acre and half of a hoof of a mule. Like Queenandi, so many of us have lived in these intentionally destroyed communities so long – police harassed, contained, redlined, gentriFUKed, under-employed, incarcerated, and never respected – and yet as my strong Black-Indian Mama Dee would always say, “What do we have to show for it?”

This is why us po’ folks, evicted, landless, houseless peoples – some of us living in so-called “public housing” – at POOR Magazine launched the Homefulness project. Un-philathro-pimped and never devil-oper controlled, it puts the equity, decisions, power in the hands of all us peoples who are usually only told what and where we can go and do.

We have a 10 point plan to teach and share with any and all public housing tenants who want to fight for their own control. You have equity, you have the ability to stop this take-down and take back your own stolen resources, rooted in thousands of plantation lies that go back into generations of Amerikkkan colonizer lies.

Please contact POOR Magazine via email at deeandtiny@poormagazine.org if you are a public housing resident and would like us to come to your building to teach and share the Homefulness 10 point plan.

To read the extensive WRAP reports, go to www.wraphome.org.