New information revealed at Omaha’s annual Black August Weekend, held at the Malcolm X Memorial Foundation, may engender a glint of hope for Nebraska political prisoners, Mondo we Langa and Ed Poindexter. The two await the answer to an age-old question: How long is life?

Perhaps most don’t want to know their exact number of years and days, but when living life parallels serving a “life sentence,” longevity is a double-edged sword and the question demands an answer. We Langa and Poindexter, also known as the “Omaha Two,” have been imprisoned 43 years. Both are in Nebraska’s State Penitentiary in Lincoln. The two former Black Panthers were convicted of first degree murder in the spring of 1971, for an August 1970 bombing which killed an Omaha police officer. 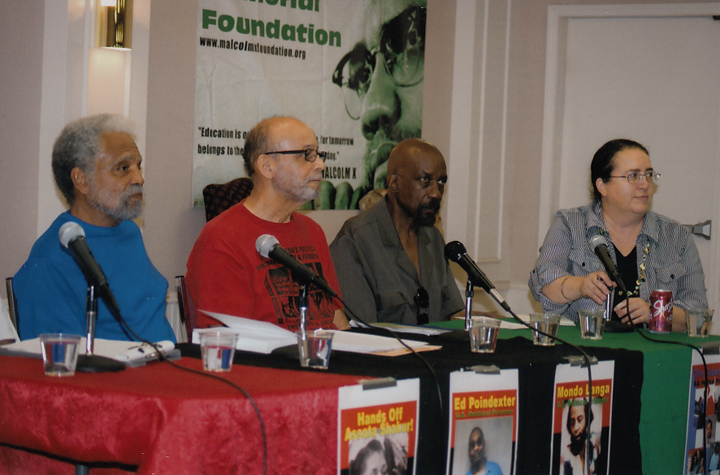 Hinds will file affidavits in the Nebraska Supreme Court in support of a petition filed by we Langa’s attorney in Omaha, Tim Ashford. Mr. Ashford’s petition outlines the illegality of Poindexter and we Langa serving de facto life sentences without possibility of parole in contravention of the state Constitution, which makes no provision for such a sentence unless treason or sedition is proven. Neither man was ever charged with those crimes.

We Langa and Poindexter, also known as the “Omaha Two,” have been imprisoned 43 years.

According to Hinds, “For them to serve a sentence of life imprisonment without the possibility of parole is an illegal sentence.” Hinds says two members of the Parole Board recommended them for commutation. “Those individuals are willing to testify that they believe, based on their experiences, that an unwritten policy exists for them (Poindexter and we Langa) to serve this illegal sentence.” There is no word on when a hearing is to be held on the petition.

Appeals and petitions have been repeatedly struck down. In 1975, the federal District Court and the Eighth Circuit Court of Appeals declared there was no probable cause for a police search of Mondo we Langa’s home. Therefore the search was illegal. The court overturned the convictions and ordered a new trial, but the U.S. Supreme Court refused to hear the case. The high court ruled violations of Fourth Amendment rights during searches and seizures did not warrant a new trial.

According to Hinds, “For them to serve a sentence of life imprisonment without the possibility of parole is an illegal sentence.” Hinds says two members of the Parole Board recommended them for commutation.

Twenty years ago, the Nebraska Parole Board recommended to the Board of Pardons that the sentences include a finite number of years. In Nebraska, it is necessary to have a definitive sentence to be eligible for parole. The Board of Pardons consists of the governor, the attorney general and the secretary of state. With them, the decades old recommendation languishes.

Hogan of the NAACP asserts that there is a “conspiracy by the state of Nebraska to keep Mondo and Ed in the penitentiary until they die.” Hinds agrees. “If the prison authorities – the governor, the attorney general, secretary of state, people on the Pardons Board, people presently on the Parole Board – have their way, they will die in prison.” 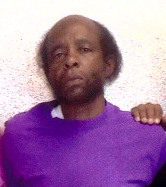 Mondo we Langa believes there were two agendas at work. The FBI wanted to put an end to the Black Panther Party. “The Omaha Police Department would have had that on their agenda as well … but somebody had to pay for (Officer) Minard’s killing.” With no real evidence and four other suspects in the case, he and Ed Poindexter were tried and convicted. “So they got that taken care of and at the same time they were able to essentially kill the head so the body would die with respect to the Black Panther Party in Omaha.”

Amnesty International has called for immediate release or a new trial and recognizes Ed Poindexter and Mondo we Langa as political prisoners. Both men were under scrutiny by the FBI’s COINTELPRO (Counter Intelligence Program) operation, which targeted anti-war groups, civil rights activists and the Black Panthers, including the Omaha chapter.

“COINTELPRO 101” was a featured film at Black August Weekend, which was sponsored by the Malcolm X Memorial Foundation, Nebraskans for Justice, X Factor and the Omaha Jericho Movement. “COINTELPRO allowed the government to spy on any organization that showed dissent,” said event organizer Carlos Carr, who is also on the board of the Malcolm X Memorial Foundation. “That included the Communist Party, anti-war protesters, Martin Luther King, Malcolm X and members of the American Indian Movement.”

Amnesty International has called for immediate release or a new trial and recognizes Ed Poindexter and Mondo we Langa as political prisoners.

The fight continues to free other political prisoners as well. Laura Garza and Socialist Party member Joe Perasso, who ran for the Omaha City Council last May, gave an update on the Cuban Five. Gerardo Hernandez, Ramon Labanino, Antonio Guerrero, Fernando Gonzalez and Rene Gonzalez were charged and convicted of conspiracy to commit espionage by the United States government in 1998. The Five admitted they infiltrated Cuban American paramilitary groups to prevent violence against Cubans and supporters of the Cuban Revolution. Their assignment was to keep the Cuban government informed. Three are serving life sentences without parole.

Perasso said free speech is under attack in Omaha. He cited a recent break-in at his home in which only his political materials were stolen or ransacked. And he circulated for signatures an open letter about the break-in to Omaha Mayor Jean Stothertz.

The keynote speaker of the Black August Weekend event was University of Cincinnati professor of Africana Studies and editor of “The Black Panther Party Reconsidered” Dr. Charles E. Jones, who spoke of government and police efforts to crush and exterminate the Black Panthers “across the country and here in Omaha.” Dr. Jones, a nationally recognized Black Panther scholar, is a co-author on a new book about the Omaha Two, called “Forgotten Comrades.”

He stressed that police brutality persists today even as it did in 1970 when Ed Poindexter and Mondo we Langa were imprisoned. “We couldn’t leave a building without being frisked or harassed. This went on around the clock,” said Poindexter.

Before their arrest in August of 1970, we Langa, a Creighton University student then known as David Rice, and Poindexter, a Vietnam veteran, were recognized as leaders in the Black Panther Party. They formed an off-shoot called the National Committee to Combat Fascism. Both were community activists advocating fair housing and ending racism in the Omaha public schools. They promoted political education and worked to end the Vietnam War.

Evidence against the Omaha Two was sketchy at best. Their fingerprints were not found on dynamite used in the bomb which killed Officer Minard and skin tests for dynamite residue were negative. Both men maintain their innocence and we Langa believes the dynamite was planted. Former Omaha police officer Marvin McClarty, who was present when officers say they found the dynamite, concurs. “To this day, I believe that (dynamite) was planted in that house.”

The main witness for the prosecution, Duane Peak, was a 15-year-old African American. Police charged him with Officer Minard’s murder when they received a tip that he was involved in the bombing. Peak, also a member of the National Committee to Combat Fascism, initially confessed that he alone made the bomb.

After three days in jail, Peak told police that Ed Poindexter had made a suitcase bomb and that Poindexter and Mondo we Langa told him to leave it on the porch of a vacant house in North Omaha. Peak alleges he was then instructed to call police and say a woman was dragged into that house screaming. Police responded and Officer Larry Minard was killed when the bomb exploded.

Nebraska state Sen. Ernie Chambers, who was present in the courtroom, says when court reconvened, Peak looked as if he had been beaten. According to defense attorney David Herzog: “He had been worked on, really worked on. It was frightening to see what happened to that young man.”

When the prosecution asked again if we Langa and Poindexter were involved in the bombing, Peak recanted his earlier testimony and again implicated them. Shortly after the men were convicted, we Langa’s home burned to the ground, extinguishing any opportunity for post-trial investigation. Duane Peak was allowed to plead guilty to juvenile delinquency and spent four years in juvenile detention.

Ed Poindexter now holds a master’s degree from Vermont’s Goddard Graduate Program. He is an artist, writer and teacher. Since his incarceration, he has created a musical drama, “Shakedown Blues,” and written two survival books for troubled youth. He advocates non-violence and has developed a program to encourage change in attitude and behavior for men who batter women.

Mondo we Langa has written several books of poetry. In 2012, he released the second edition of his anthology, “The Black Panther is an African Cat.” He has written short stories and articles for several literary journals. His poem “Great Babaleur” was featured in “Malcolm X: By Any Means Necessary” by Walter Dean Myers. Two of his plays, “Different Dances” and “We Dance in Our Neighborhood,” were performed by youth theatre groups in Nebraska and New York City. He serves as a mentor to young men new to the prison. He has never been involved in a violent incident. Both he and Ed Poindexter have been called model prisoners.

“So what can you do?” asked Mr. Hogan. “Write even a postcard to Ed or Mondo. Just say, ‘I’m thinking about you. I heard about you and I am concerned about you.’ You cannot imagine what that will mean to someone separated from the community they love.”

Sen. Chambers promises to push for legislation to parole we Langa and Poindexter. Meanwhile, 43 years behind bars have taken a toll on the health of the Omaha Two. Mondo we Langa, now 66, is housed in the prison’s skilled nursing facility. He uses a walker, and breathing through tubes pumping oxygen keeps his chronic obstructive pulmonary disease at bay. Ed Poindexter, who is 68 years old and a diabetic, sometimes uses a cane or walker.

The Omaha Two will have a parole hearing in January. Their supporters will ask for a compassionate release since neither man poses a threat to society.

“So what can you do?” asked Mr. Hogan. “Write even a postcard to Ed or Mondo. Just say, ‘I’m thinking about you. I heard about you and I am concerned about you.’ You cannot imagine what that will mean to someone separated from the community they love.”

For more information, contact Omaha Jericho at ctrl@q.com or eliga@nfhr.info or Nebraskans for Justice at P.O. Box 11725, Omaha, NE 68111 or comments@nebraskansforjustice.com.

Linda Kennedy, a freelance journalist with more than 20 years’ experience in television, radio and print and an acquaintance of Mondo we Langa, can be reached at Linda@lkmedia.biz. 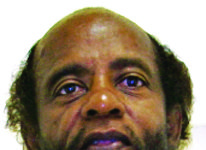 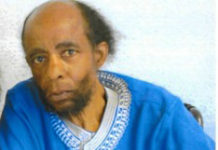