In my 29 years of incarceration, I had never seen what I would witness on Sept. 24, 2013, on our way back to Pelican Bay State Prison’s solitary confinement torture chambers after our temporary transfer during the hunger strike. 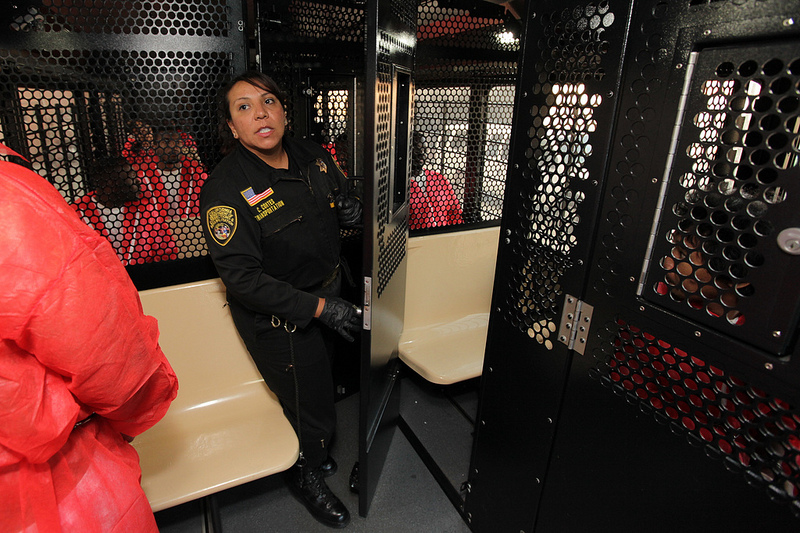 We must commend our 20 prisoner representatives for having the foresight to see that the CDCr officials would be utilizing their authority – their power – to create situations and circumstances that would attempt to encourage and manipulate warfare between races inside the prison environment.

On the way to CSP-Sac (New Folsom prison), on Aug. 23, 2013, for our emergency medical transfer from PBSP Ad-Seg, we prisoners were placed on the bus and separated by race. New Afrikans were placed in the up front cages. The whites were placed across from the New Afrikans in the wider cage, but still up front.

The larger group of Mexicans from the Los Angeles County area was placed in the back of the bus, and they too were cut off from each other by a dividing cage door. The bus had cameras in the back and the front of the bus, so the transportation officer who’s not driving could keep us under surveillance. This was their legitimate security protocol for transferring so-called highly secured prisoners.

So why were security protocols neglected on the way back? There was one white, one Mexican from the northern district and two New Afrikan prisoners among a total of 25 prisoners on the bus. The remainder were Mexican prisoners from the Los Angeles County area. Yet there was no attempt to secure the bus.

We prisoners were hopping from seat to seat. It was all good. The front row cages were not locked, which afforded us the freedom to move about freely. There was a “colorful” transportation officer named Wagner, who came on the bus to give a speech, talking about nothing. I’d never seen him before in my life prior to this bus ride, but he get on the bus talking all this nonsense and he kept alluding to me by name, saying, “Ain’t that right, Crawford?” I would say nothing in response.

I didn’t read too much into this initially, but after we got five hours from Pelican Bay State Prison, it was nightfall outside, and here is where, in all my 29 years of incarceration, I have never seen anything so blatantly clear. Earlier we had picked up a young 23-year-old New Afrikan from Old Folsom named Tay, who was 15 months to the house and had never been to prison in his life. Young and innocent, he would make the third New Afrikan in the bus.

We would be unable to see each other for the next five and a half hours, due to transporting officers refusing to turn on the lights, and not one prisoner requested that they do so. It was so dark you could not see the person next to you. Never before has this ever happened for such a long period of time on a CDCr transportation bus, especially with the caliber of prisoners that these so-called officials call “the worst of the worst.”

Now we prisoners have to realize that these types of situations will be prevalent throughout our futures because CDCr will do whatever is within its power to place us as prisoners back on a path of senseless, reckless violence in order to serve their interests. They wanted the majority to attack the non-majority when there existed a clear opportunity to do so provided by the CDCr transportation.

But our 20 representatives had the ability to understand our historical contradictions and how CDCr utilizes these same realities in order to allow one group to attack another based on how they place them inside the prison theater. CDCr officials allow each race, depending on who they are out of favor with, to have total dominance over the other races, which can unfortunately lead to opportunities for attacks by the majority race.

The End to All Hostilities declared last year by our representatives has basically weakened CDCr’s ability to create race, gang and internal warfare inside the prison theater to the extent that they once did. We prisoners have to be very conscious of the many traps that will be set by prison officials toward encouraging prisoners into warfare. We have to remain very vigilant inside these prison environments to protect our End to All Hostilities.

After we finally got to PBSP, one of the elders, Huerta, turned to me and said, “Mutope, you see what they just tried to do?” I ‘sponded, “I sure did!” He said, “You need to put that out there.” “You know I am,” I smiled.

The youngster, Tay, from Richmond, Calif., was a fish out of water. I pulled him to the back of the bus with me and an elderly New Afrikan prisoner, Dadisi, and after he was done talking with the two of us, on occasion he would lean back and go to sleep, unaware of any threat whatsoever for an innocent Level 2 prisoner who had no clue.

Hopefully, when he learns more about the prison environment, he will come to appreciate the 20 representatives for their foresight to institute an End to All Hostilities. He was the only prisoner to sleep on the bus.