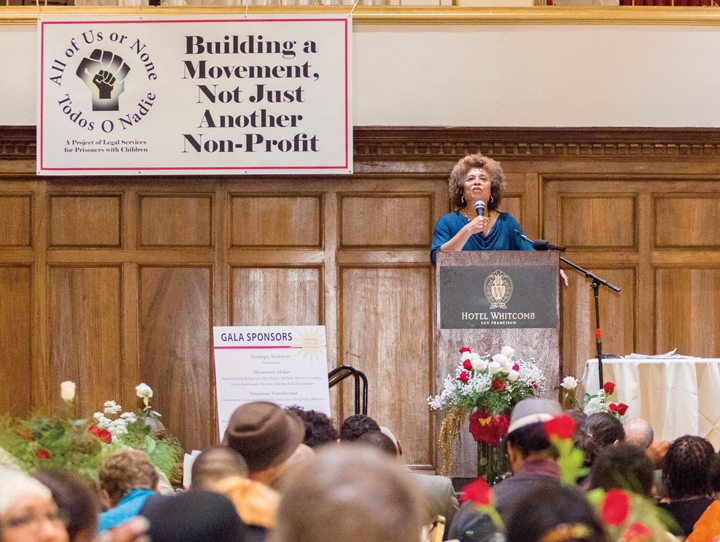 At Legal Services for Prisoners with Children’s 35th Anniversary Celebration on Oct. 19, headlined by Dr. Angela Y. Davis and Michelle Alexander, I noticed immediately the “logo,” a phoenix rising from the ashes, the theme for California Coalition for Women Prisoners’ 15th Anniversary celebration of the Fire Inside two years ago. All of Us or None is 10 years old now, and LSPC at 35 is the parent of CCWP (California Coalition for Women Prisoners) as well, laying the groundwork for its organizational structure at its inception.

Known for its legal work in women prisoners’ emancipation, the California Habeas Project, LSPC is an anchor in the prison abolition movement, led by former prisoners and former enslaved Africans more recently and centuries earlier.

Dr. Angela Y. Davis spoke of Ruchell Magee, her co-defendant, who 50 years ago at their trial spoke of the Marin Courthouse shooting as a slave insurrection, citing the Ruffin v. Commonwealth, 62, Va. 790, 1871 case (http://www.libraryindex.com/pages/323/Prisoners-Rights-Under-Law.html). Subsequent amendments to the U.S. Constitution continue to strip prisoners of all their rights, even the most basic human rights. 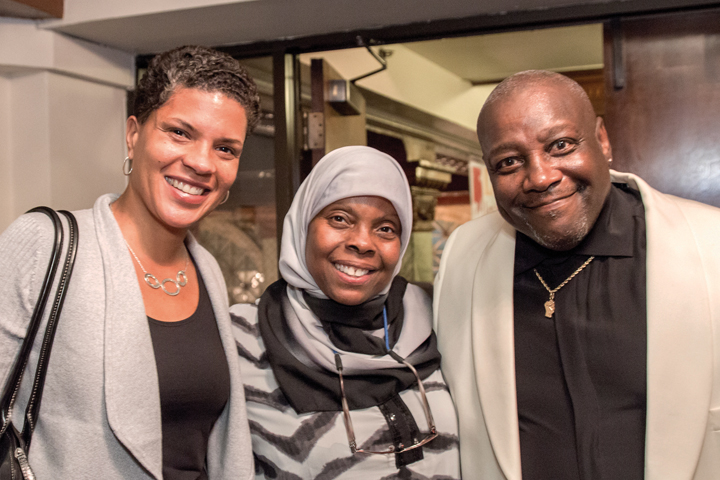 This is why body cavity searches are permissible, not to mention destruction of property, disregard of health related requests or mandates, even compensation when mistakes are made. Property is not worthy of consideration, especially those locked behind bars; animals often have more rights than prisoners. Manuel La Fontaine said when reflecting on the history of All of Us or None that even a decorated cell is still a prison and none are acceptable.

Jason Bell, awardee, spoke of Active Traumatic Stress Syndrome, and how John K. Irwin, who was known on the yard as Big John, gave men an example of what rehabilitation looked like. Bell stated that often the idea of changing one’s life is a steep incline when one lacks a guide, and like Sisyphus the rock often crushes the newly released prisoner, creating the circumstances for the revolving door or recidivism. Professor Irwin was that life-jacket for those in his program, which Mr. Bell directs at San Francisco State University, Project Rebound. Highly successful, Mr. Bell and Ms. Vonya Quarles, executive director of Starting Over, Inc., who also received the John K. Irwin Award, exemplify what rehabilitation looks like. 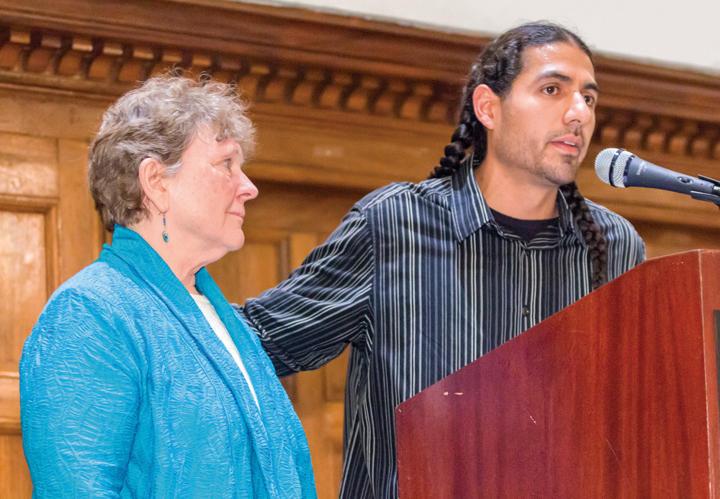 Ms. Susan Burton of A New Way of Life, founder and recipient of the Charisse Shumate Award, spoke of doing the work of helping women who were reentering the society after being away for substantial lengths of time.

It was so good to see Linda Evans, board member for California Coalition for Women Prisoners, the powerful couple Diana Block, also a CCWP board member, and Claude Marks, director of Freedom Archives. Linda received the All of Us or None Lifetime Achievement Award. It was great seeing Elder Freeman, Arthur League, LSPC board member, who along with Sundiata Tate returned to the San Francisco Bay after a fruitful 47th Annual Black Panther Party Reunion in Santa Rosa Oct. 17-19. Elder looked slimmer, yet strong. It was great to see him up and about. Perhaps he might make it to Cuba still (smile). 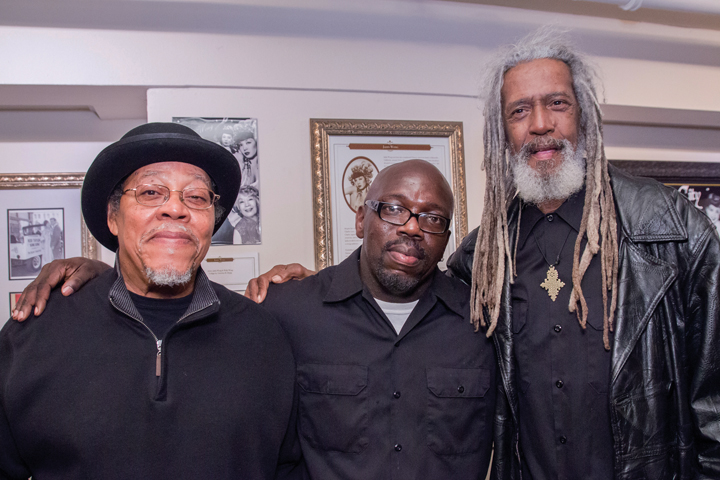 I remember many years ago when Linda Evans was released; she is certainly tireless in her commitment to justice and liberty for those whose voices are not always audible or if heard are often simultaneously dismissed from the public discourse. The flame on the program cover, Kali, the goddess of destruction and renewal is actualized in her person and in the persons of the LSPC family.

Michelle Alexander gave a thought provoking keynote where she spoke of her early acquaintance with LSPC Executive Director Dorsey E. Nunn. It was an evening of shared confidences. Dorsey spoke of being inspired by Angela Davis’ writings and work while still inside, while Davis spoke of not understanding what her co-defendant meant 50 years ago; however, Critical Resistance is evidence of her breakthrough. Alexander described Dorsey’s presentation to her law class at Stanford University, where he told her students that the trick the U.S. judicial system uses to justify its criminalization of a people stems from its marketed perception that such people are not human. What other reason can there be for sentencing somebody’s child to 25 years to life at 15-16 or even younger than that? 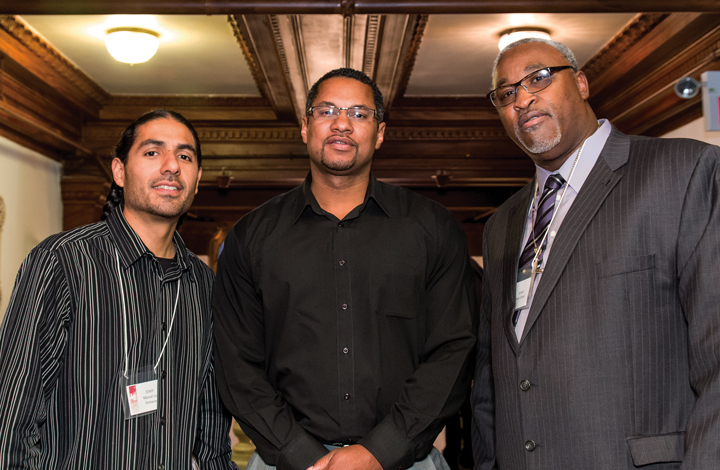 Alexander transported us to her classroom over 20 years ago, where we saw Nunn – raw, brash and beautiful – tell the students that he was a man and that his crimes did not strip him of that fact. Therefore, why do U.S. policies strip prisoners of their human rights? While Davis reflected on this year of monumental anniversaries of tragic and heroic acts, policies and landmark success stories, Alexander cautioned us from thinking mere tinkering with the broken American judicial system would repair it. She said that it would take a revolution and revolutionary moves to make the kinds of permanent and lasting changes needed to repair the legacy that is Jim Crow and legalized enslavement – or the prison industrial complex. Like the Bay Bridge with two spans, the one needing no repair, while the other span had to be replaced – its broken predecessor standing temporarily in its shadow – likewise, the American judicial system doesn’t need radical repair; like the bridge that fell in 1986, it needs to be discarded. 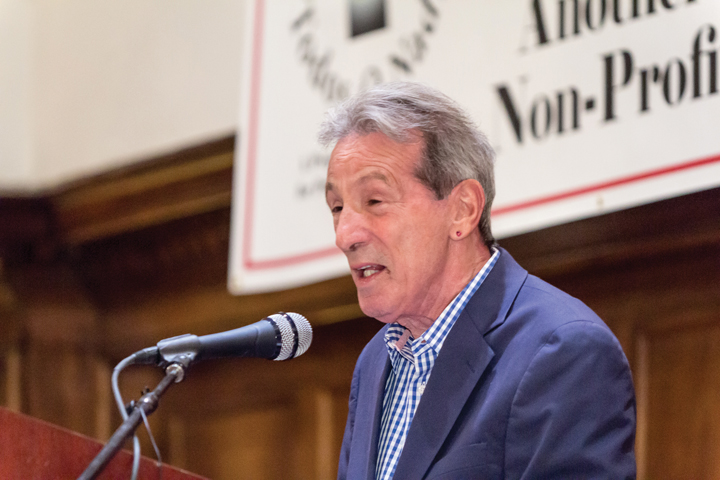 Davis spoke of the late Herman Wallace of the Angola 3 and the fact that after 41 years in solitary confinement, his imagination kept him free. Cages are confining only when one loses his ability to dream; and when one is kept separate from other men or women, it gets hard to maintain one’s sanity, not to mention one’s ability to literally think outside the cage.

We want our bodies freed too.

I saw many formerly incarcerated women and heard that a lot more women since my last visit have been released. I plan to run a series on these family members who have been away but were not forgotten.

The gala was an intimate look at what matters to those of us present: prison abolition or prison reform and certainly attention to the restoration of human rights for those behind bars. This was evident from a quick survey of who was in the room, whether that was Dolores Canales, honored for work during the hunger strikes recent and past through her organization, California Families to Abolish Solitary Confinement, with the Family Unity Award, or Tom Ammiano, California Assembly Speaker, given the All of Us or None Award, who told us to not give up on Gov. Brown (smile). 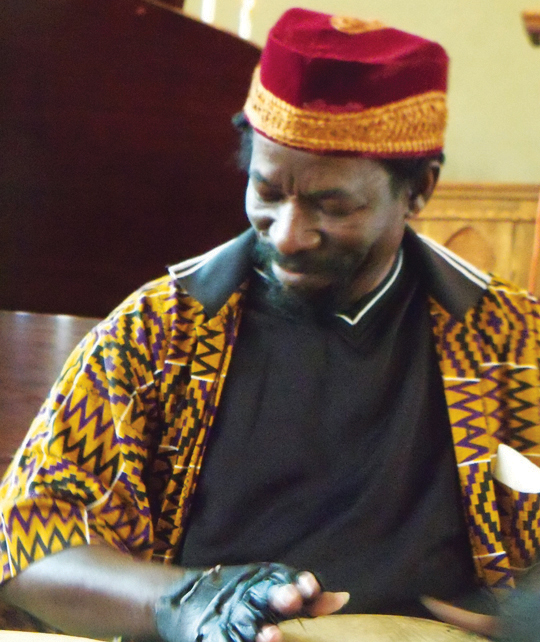 Ban the Box and elimination of shackles on women in labor are two recent legislative successes initiated by LSPC. The bill to stop incarcerating drug addicts was not signed by Brown, but Ms. Susan Burton said it would be if not this year, then early next year. That there are people incarcerated for drug offences to the tune of 25 or more years is unconscionable. This type of sentencing needs to be stopped permanently.

For those who have never seen Dr. Angela Davis in a setting with comrades, it is a really wonderful sight to see. She is so engaging and at home with her folks – perhaps it’s the Southern upbringing or perhaps it is a shared history and experience. She knows solitary confinement; she knows the beast from the inside. The whale swallowed her and then spit her out, yet there are so many others left in its bowels stirring and stirring and stirring things up (smile).

The following day, both Davises were at the Church for the Fellowship of All People (http://www.fellowshipsf.org/), the Howard Thurman Church in San Francisco founded 69 years ago, I think the same year the United Nations was founded or the year before (smile). Dr. Angela Davis told us that Dr. Fania Davis, her sister, reminded her that she and the church were founded the same year (smile). A sister act to be reckoned with, Rev. Dr. Dorsey Blake stated at the 18th Annual Convocation. The audience was studded with luminaries – Belva Davis, Ray Taliaferro and quite a few clergy from other houses of worship. Quite remarkable women who have made significant marks on a society that would silence them if it knew how. 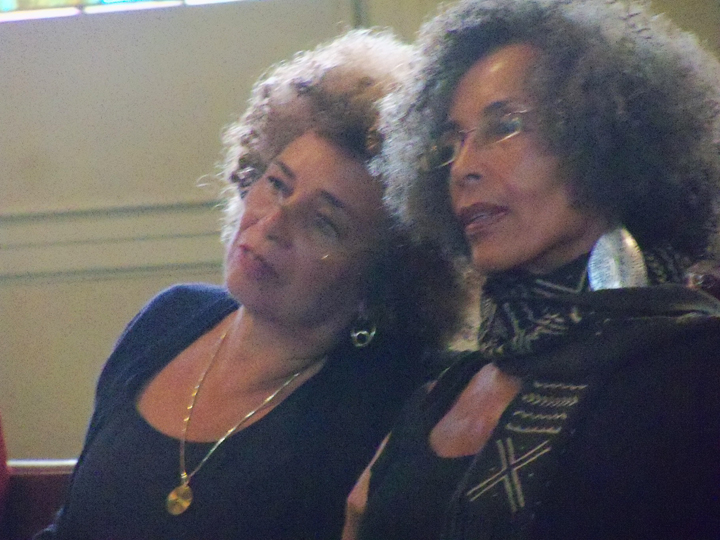 I was thinking later on after Dr. Fania spoke of her mother and how much she appreciated Dr. Howard Thurman and that she was able to meet with his wife before she passed in the early 1990s. She told us really funny stories about being the kid sister of Angela Davis (smile). How the hanging out they do presently is a new thing, that when she was younger, big sister did not hang out with her younger sibling. Watching them break bread and fellowship with others after the service was yet again another aspect of the Davis mystique. The two sisters didn’t rush off after the awards ceremony – they stuck around, ate a lovely vegan meal and chatted with admirers and took photos between bites.

I was curious about the 50th anniversary of the 16th Street Church bombing; Fania mentioned in her talk that she had attended it. Angela was here at a special fundraiser for the Civil Rights and Restorative Justice Project, headed by her former attorney and friend, Dr. Margaret Burnham (http://www.northeastern.edu/civilrights/). I thought about the collective trauma and the pain that still lives in many survivors in Alabama. I hadn’t known about one of the victims, the sister of one of the slain girls, who lost her eye and her sister, but not her life. She called into the church Sept. 15 in Oakland. She saw her dreams go up in smoke after the bomb ripped through her heart.

Where do veterans put the pain and suffering? What tools do they muster or have they identified to help them heal the tears in the collective fabric that holds America accountable for needless deaths during this period. Trauma unaddressed doesn’t dissipate; it lingers within and then passes on to the next generation – their inheritance.