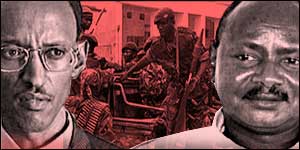 KPFA Evening News Anchor Anthony Fest: The Congolese army, with the help of the UN Force Intervention Brigade, decisively defeated the M23 militia in the Democratic Republic of the Congo’s eastern Kivu Provinces this week, but many Congolese, Rwandans, and Ugandans, are asking why the Democratic Republic of the Congo is now engaged in peace talks with the M23, and not with Rwandan President Paul Kagame and Ugandan President Yoweri Museveni.

For more than a decade, the UN Group of Experts on the Democratic Republic of the Congo have documented Rwandan and Ugandan backing for M23’s previous incarnations, and the 2012 report documented that M23 was actually commanded by Rwanda’s top General and Defense Minister, and in close contact with top Ugandan officials as well. KPFA’s Ann Garrison has the story.

KPFA/Ann Garrison: U.S. officials and the corporate press have agreed to identify the M23 militia as “Congo rebels,” despite the 2012 UN report that says M23’s chain of command ends in the office of Rwandan Defense Minister James Kabarebe. This week the U.S. said that it is prepared to lift sanctions on Rwanda if it simply “cuts ties” with M23. Earlier this year, Congolese historian and activist BK Kumbi interrupted UN Secretary General Ban-Ki-Moon at a conference in Geneva to demand that Uganda, Rwanda, and Burundi be named as the real aggressors.

Rwanda has been known … has … is responsible of what is going wrong in the peace, in Congo, and nobody says something about that! Burundi! Uganda! You just say that! We are sick and tired of hearing every time people here just being so peaceful with AFRICA! You should let AFRICA in PEACE.”

What about people of the CONGO?

Convention Security: Multiple voices calling in French for order, then for security officers to throw BK Kumbi out. [As they did.]

KPFA/Ann Garrison: BK Kumbi also wrote that the Western powers, including the U.S., UK, Canada, and Belgium have collaborated with Uganda and Rwanda, to control Congo’s vast resource wealth. She urged her Rwandan, Ugandan, and Congolese brothers and sisters to keep resisting.

On the Monday after next, BK Kumbi will be a guest on the Morning Mix with Sabrina Jacobs and myself.

BK Kumbi’s letter can be read here on the website of the San Francisco Bay View: “Letter to my Rwandan, Ugandan and Congolese brothers and sisters celebrating M23’s defeat.”