by the Center for Democracy in the Americas

In a statement at the White House, President Obama paid tribute to Nelson Mandela who died Dec. 5 at age 95:

“Today, he has gone home. And we have lost one of the most influential, courageous and profoundly good human beings that any of us will share time with on this Earth. He no longer belongs to us – he belongs to the ages.

“For now, let us pause and give thanks for the fact that Nelson Mandela lived – a man who took history in his hands and bent the arc of the moral universe toward justice.” 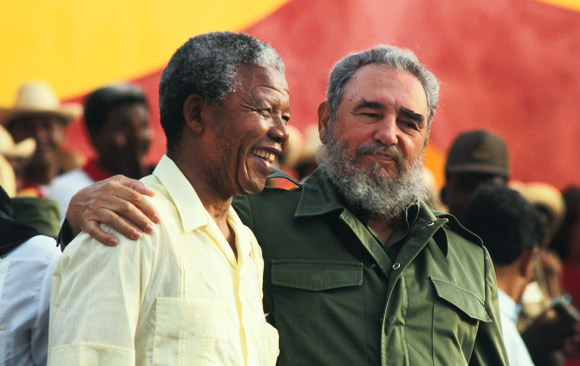 Nelson Mandela earned these beautiful words and even greater accolades long before President Obama was elected. But the president’s comments were noteworthy because they were a sharp departure from how Mandela and the anti-apartheid movement he represented had been regarded by U.S. foreign policy.

“Until five years ago,” as AFP reported this morning, “Mandela and other members of the ANC remained on the U.S. terror watch list because of their armed struggle against the apartheid regime.”

In what it considered to be Cold War battlefields, in places like South Africa and Angola, where the battles were actually being fought over colonization and racism, Washington drew a tough line. South Africa and its ally Cuba fell onto the other side. For decades, Mandela and his African National Congress were considered terrorists by the United States. This also worked to the convenience of the hardline anti-communist opponents of the Cuban government.

Beginning in the early 1980s, Cuba was put on the State Sponsors of Terror List – punished, in part, for its intervention in southern Africa. This has done enduring damage to Cuba’s economy, with the sting of sanctions still being felt every day by Cubans and by international businesses engaged in commercial transactions with their government.

At times, Washington’s Cold War preoccupation with Cuban troops in Angola led it in odd directions. One of President Reagan’s National Security Decision Directives, dated May 7, 1987, contemplated using U.S. information efforts “to undermine Cuba’s ability to deploy troops in Angola through specially focused radio programming broadcast to Cuba by Radio Martí,” which suggests that the National Security Council had no idea the signals were jammed and that no Cuban could be affected by propaganda they couldn’t hear.

Cuba’s alliances in southern Africa meant something entirely different to people like Nelson Mandela. He called Cuba’s decisive role in Angola “a victory for all of Africa.” In a speech Mandela delivered in Cuba not long after he emerged from his 27-year imprisonment, he said:

“We in Africa are used to being victims of countries wanting to carve up our territory or subvert our sovereignty. It is unparalleled in African history to have another people rise to the defence of one of us.”

In the same speech he also said:

“We admire the sacrifices of the Cuban people in maintaining their independence and sovereignty in the face of a vicious, imperialist-orchestrated campaign. We too want to control our own destiny.” 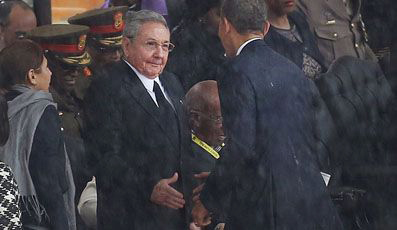 The same trip that brought Mandela to Cuba in 1991 also saw him come to the United States and brought him into contact with Americans who weren’t ready to canonize him.

An article published earlier this year, “When America Met Mandela,” relates a pointed exchange with Nightline Host Ted Koppel who challenged his right to meet with leaders of “rogue states” like Fidel Castro, Yasser Arafat and Col. Gadhafi. “They support our struggle to the hilt,” Mandela told Koppel and proceeded to lecture him on gratitude and self-determination. “Any man who changes his principles according to whom he is dealing,” he told Koppel to applause from the audience, “that is not a man who can lead a nation.”

Those comments, according to the Miami Herald, “caused an official welcome planned for him to be rescinded” and led five Cuban- American mayors to cancel their meeting with Mr. Mandela, sending a letter instead calling his comments “beyond reasonable comprehension.”

As he edged closer to the end of his life, cooler heads at least in Washington prevailed. In 2008, Congress passed, and President George W. Bush signed, legislation removing the African National Congress from the terrorist watch list.

The bill, H.R. 5690, is evidence of how the United States finally came to view Mandela not as a terrorist but as a global leader of unparalleled moral standing.

Cuba was listed as a state sponsor of terror for reasons that included actions that Nelson Mandela believed led to his own freedom and the end of apartheid. The president could hardly offer a more fitting tribute than by removing Cuba from the terror list in Mandela’s memory and name.

The Center for Democracy in the Americas is devoted to changing U.S. policy toward Cuba and the other countries of the Americas by basing our relations on mutual respect, fostering dialogue with those governments and movements with which U.S. policy is at odds, and recognizing positive trends in democracy and governance. Visit www.democracyinamericas.org.

As the world focuses on Tuesday’s historic handshake between President Obama and Cuban President Raúl Castro, we look back at the pivotal role Cuba played in ending apartheid and why Castro was one of only five world leaders invited to speak at Nelson Mandela’s Dec. 10 memorial in Johannesburg. In the words of Mandela, the Cubans “destroyed the myth of the invincibility of the white oppressor … [and] inspired the fighting masses of South Africa.”

Historian Piero Gleijeses argues that it was Cuba’s victory in Angola in 1988 that forced Pretoria to set Namibia free and helped break the back of apartheid South Africa. We speak to Gleijeses about his new book, “Visions of Freedom: Havana, Washington, Pretoria, and the Struggle for Southern Africa, 1976-1991,” and play archival footage of Mandela meeting Fidel Castro in Cuba.