“You are young, gifted and Black. / We must begin to tell our young / There’s a world waiting for you, Yours is the quest that’s just begun.” – James Weldon Johnson 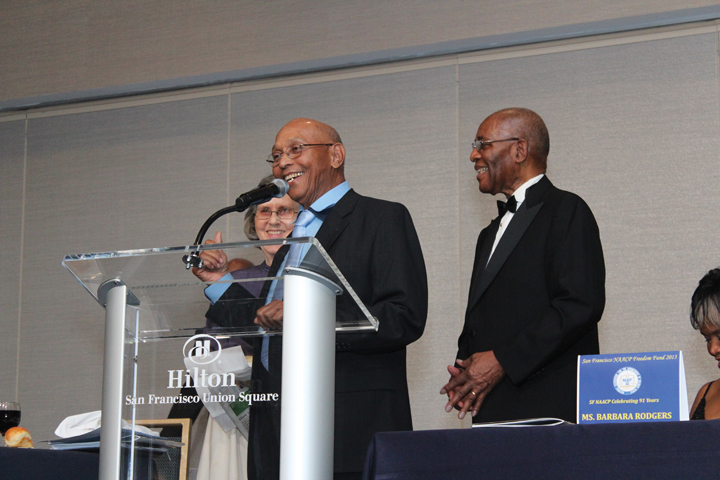 Every month the Bay View is read by people from all walks of life. Young, older, elderly. People of all ethnicities, incomes, professions and lifestyles. Some read to find out more about their own community. Others read to learn about a community they don’t belong to, but want to understand better, collaborate or commiserate with. Still more read to keep an eye on what “the other” is up to and brace themselves for what’s next in our collective quest for Black empowerment, respect and self-determination.

November was a busy month. My wife Mary and I, along with several other awardees, were blessed to receive the Frederick Douglass North Star Award from the San Francisco NAACP at their annual gala on Saturday, Nov. 9, and were followed on stage by the keynoter, none other than Tavis Smiley, a fellow entrepreneur, admired media powerhouse, philanthropist and political analyst. We’d sent him a copy of our paper for years. Now we have direct confirmation that he does indeed actually read the Bay View, just like you.

Not long after the gala, Dr. Amos Brown, pastor of Third Baptist Church and president of the SF NAACP, sent out an impassioned appeal to his fellow clergy to support “justice, fairness and equality of opportunity” for Blacks in San Francisco.

In this missive, Dr. Brown cited numerous complaints the NAACP has received that amount to a validation of what we at the Bay View have long suspected: that the desired end result of discriminatory tactics by private and public entities against Blacks, whether that be in the realm of racial profiling by police or in education, employment or contracting, is wholesale elimination of our presence in this great City.

“Now is the time for us to stand up and defend our people who attend our churches and live in the broader community. If we are denied justice and equal opportunity in this city, it will continue to adversely impact attendance in our churches, loss of revenue and the ultimate destruction of our population,” Dr. Brown wrote in his letter to members of the clergy.

In the NAACP’s subsequent monthly branch meeting, Dr. Brown elaborated on why he had felt compelled to address his colleagues, leaders of faith, who have historically played such a significant function in the lives of our community, from the days of slavery, Civil War and Reconstruction, on through the turn of the century, and on up through the Civil Rights Movement. Dr. Brown noted the presence at this gathering of Rev. Richard Baker, Rev. Philip Cousins Jr. of Bethel AME Church, Archbishop Franzo King of St. John Coltrane African Orthodox Church, Rev. Arnold Townsend of First Union Baptist Church and vice-president of the SF NAACP chapter, and Rev. Regnaldo Woods.

Dr. Brown noted how few of his colleagues – both men and women either leading predominately Black or historically Black congregations in this city – attend NAACP meetings or events, exhort their flock to attend or volunteer or become members, or take a leadership role in direct action, i.e., to protest against injustices, rally around victims, petition the public or solicit donations. He appealed to attendees to urge their pastors to take a more active role and, in turn, influence their congregations to advocate for themselves and their neighbors.

“Now is the time for us to stand up and defend our people who attend our churches and live in the broader community. If we are denied justice and equal opportunity in this city, it will continue to adversely impact attendance in our churches, loss of revenue and the ultimate destruction of our population,” Dr. Brown wrote in his letter to members of the clergy.

Kenny Farris and his son, Kenny Farris Jr., accompanied by their supportive family members, detailed their experiences working with the SF Fire Department at the branch meeting. From being singled out and humiliated during training operations, receiving unwarranted or inconsistent, unfair disciplinary action, and subjected to retaliation for objecting to such treatment – including being denied deserved promotion or graduation – it seems clear that in many ways, as Archbishop Franzo King observed, “San Francisco has returned to the way it was before the Consent Decree.”

For those of you who may be unaware or just too young to remember, the NAACP was instrumental in winning legal victories against the City and several of its agencies in the last five decades that mandated Blacks and other people of color be treated equally, whether under consideration for housing, education, employment or contracts. In 1984, a lawsuit by the NAACP against the San Francisco Unified School District gave way to a Consent Decree under which many of our children were able to attend high caliber magnet or alternative schools and programs. The SFUSD agreed to change or implement programs and policies to ensure that Blacks received a fair and equal education.

Yet another Consent Decree – originating from vigorous efforts by the NAACP, Black firefighters and the community targeting the San Francisco Fire Department – ended in 1998, after 10 years of oversight of its testing, hiring and promotion policies by federal authorities.

For those of you who may be unaware or just too young to remember, the NAACP was instrumental in winning legal victories against the City and several of its agencies in the last five decades that mandated Blacks and other people of color be treated equally, whether under consideration for housing, education, employment or contracts.

In the wake of Proposition 209 – which eliminated affirmative action in state government employment, public education and contracting – and the expiration of similar arrangements won via legal battles with City agencies, such as the SF Police Department, some have experienced a return to many of the exclusionary tactics that former Black Fire Chief Bob Demmons fought against for decades. I learned at this gathering that three out of the four Black trainees who participated in the SFFD’s program were released without sufficient explanation or justification, losing their opportunity to compete for long-term employment in their chosen career.

Kevin Smith and Kevin Taylor reminded the group that the problem does not confine itself to the SFFD. It extends to the SFPD, whose officers recently waylaid a visitor to Valencia Gardens, beat him for riding his bike on the sidewalk a few feet on his return from the Make-a-Wish Foundation’s Batkid event, charged him with a felony, and kept him in jail for three days.

This madness is mirrored by private entities under contract with the City. Rev. Townsend reported on the NAACP’s efforts to intercede on behalf of beleaguered King-Garvey Cooperative residents with property manager The John Stewart Company. Yet another NAACP honoree and noted activist, Dr. Caesar Churchwell, as well as Rev. King, corroborated Rev. Townsend’s account of negotiations with the firm, which are ongoing.

In the case of public and subsidized housing, attendees learned that both residents and their guests are routinely being challenged to produce identification by privately-managed security forces when walking on public streets adjacent to housing complexes – often en route to their parked vehicle or public transit. As one unidentified woman noted at the NAACP meeting, the same security guards paid by law-abiding Black residents to protect them have been directed to harass and intimidate them and their visitors instead. A common thread in such incidents is the looming threat of eviction, which has already caused a significant drop in the number of Black tenants.

The SF NAACP has continued its vital work to support and protect our community, from combating racial profiling and hate crimes, employment discrimination, the shut-out of our businesses from public and private contracts, and predatory lending practices and foreclosures, to demanding quality and cultural inclusion and competency in education, healthcare and every aspect of our lives. This work is recognized and lauded all over the world, in every corner of the globe. The NAACP’s mission requires, however, that each and every one of us take charge of our own responsibilities in defending ourselves.

The SF NAACP has continued its vital work to support and protect our community. The NAACP’s mission requires, however, that each and every one of us take charge of our own responsibilities in defending ourselves.

For true self-determination, we must each play our part. If you are not a member of the NAACP, consider becoming one – you can attend an event or a regular meeting to learn more. If you are already a member, resolve to serve as a volunteer, if not an officer or committee member. Attend a meeting and bring a friend or family member. Not a joiner? Donate to fund initiatives that benefit the African American community and all people of color. Do your part to support an organization that has sustained us and defended us for so long.

The SF NAACP offices are located at 1290 Fillmore St. The general meeting is held every fourth Sunday at 3 p.m. in the lower auditorium of Third Baptist Church, 1399 McAllister St. Learn more at sfnaacp.org or email naacpsfbr@att.net.

“Be the change you wish to see in the world.” – Mahatma Gandhi