by the Alliance for Global Justice

Nearly a year ago, on March 5, 2013, delegations of world leaders, dignitaries and millions of Venezuelans went to pay their respects at the funeral of President Hugo Chavez. The Bolivarian Process, since 1999, has brought greater equality and happiness to Venezuelans and true solidarity and inspiration to people and nations under the thumb of U.S. hegemony. 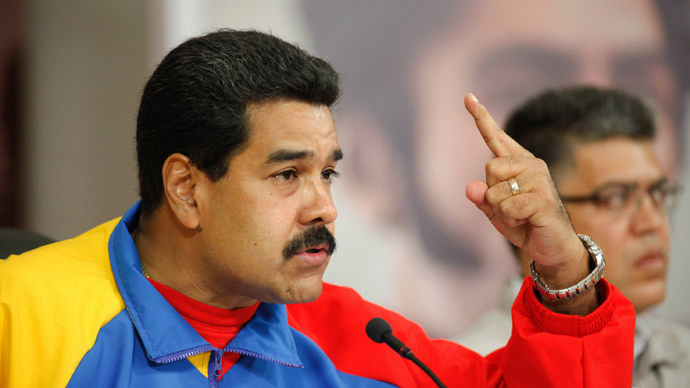 We knew we would have to defend it. The Venezuelan undemocratic and violent right wing includes U.S.-funded private university students, civil society groups tied to the 2002 coup, and the old political and economic elite. The U.S. government and transnational oil and corporate interests view this year as the time to destabilize and overthrow the new government.

Those of us who have seen directly the empowering changes gained by the Venezuelan people and who are aware of the thirst of the U.S. for this oil rich country and their need to stamp out its good example, need to stand up together right now and demand, “Hands off Venezuela!” The era before President Chavez, ruled by the violent elite interested in oil and blood drenched opulence, is not such a distant past.

International solidarity is an important component of the Venezuelan people’s own struggle of defense against all outside interference. The lies and propaganda, effectively delivered through the U.S. corporate media, sound unmistakably like past pretexts the U.S. government has pushed to gain public support for covert war.

Lies must be reinforced over and over again whereas the truth stands out like a candle in the darkness. In the past year we have seen a campaign against the democratically elected socialist government of Venezuela reminiscent of the one of 2002. Then, the former oligarchs, backed by the U.S., staged a violent coup which was quickly reversed by the popular movements.

Following that failure, they tried capital strikes and a devastating employee lockout at PDVSA, the state oil company that was then run for the exclusive benefit of the extreme wealthy. Again they were defeated by the social movement-supported government.

The Bolivarian Process, since 1999, has brought greater equality and happiness to Venezuelans and true solidarity and inspiration to people and nations under the thumb of U.S. hegemony.

With the death of President Chavez, the right has falsely believed that the strength of the Bolivarian Revolution would weaken to their advantage. They came within a couple of percentage points during the election of the presidency of an electoral victory by dressing their wolf (presidential candidate Henrique Capriles) in sheep’s clothing.

Falsely promising to continue the programs that Chavez popularly championed, they still lost. Since then they moved on to capital strikes, the hording of commodities and the capital flight of their money to bank accounts in Florida and Panama. In the run up to the recent municipal elections, they thought they could use fear and misinformation to generate an electoral victory. But they were unable to manipulate the electoral system, which has been called “the best in the world” by former U.S. President Jimmy Carter.

While still in his first year of office, President Maduro has stood up to these manipulations by putting up barriers to hoarding and capital strikes. He has also taken bold measures to combat violent crime. The challenges facing Venezuela are great, but they march peacefully towards a modern democratic socialist future.

The counter revolutionaries, backed by U.S. imperialism, seek at every step to undo the revolutionary struggle. Their goal is to dowse the torch Venezuelans carry of great hope for the poor countries and movements of oppressed people everywhere. Despite these dark forces, on Dec. 7, two days after the funeral of another great world respected leader, Nelson Mandela, Venezuelans came to the polls and delivered a wide victory in municipal elections in support of the government of President Maduro.

There will never be another Hugo Chavez or Nelson Mandela, but their greatness has been an inspiration for millions, perhaps billions of people. That inspiration doesn’t end with their passing.

President Maduro isn’t the legend that Chavez has become, but he has proven himself a skilled and passionate leader who is responsive and supported by the majority of the Venezuelan people. Ultimately the people of Venezuela are the empowered and skilled builders of their own destiny, and the violence of the right will only embolden their resolve for a better world.

While still in his first year of office, President Maduro has stood up to these manipulations by putting up barriers to hoarding and capital strikes. He has also taken bold measures to combat violent crime. The challenges facing Venezuela are great, but they march peacefully towards a modern democratic socialist future.

Beginning Feb. 12, we have entered a new period in which the extreme right, unable to win democratically, seeks to win by fear, violence, subterfuge and media manipulation. They are more confident because the U.S. government has always supported them despite their violence.

Our solidarity in the U.S. must take away their support by exposing the truth and inhibiting the huge amount of resources thrust into the right wing’s pockets for destabilization. “Hands off Venezuela” is the demand that our elected federal officials must hear from all of us.

Finally, all corporate and social media that falsely strive to confuse the populace of the U.S. with the lies that the Maduro government is authoritarian, that the opposition is democratic and independent and that what we are witnessing is a popular uprising against dictatorship must be countered with vigilance.

Contact your elected officials today! Tell them, “Hands off Venezuela!”

Sample letter to your representatives in Congress! Please use your voice!

Hands off Venezuela! The U.S. Congress is being called to respect the sovereignty of Venezuela and the legitimate democratic Venezuelan President Nicolas Maduro. The present U.S. policy towards Latin America is detrimental to our economy and self-interest. Venezuela is a country with an upstanding democracy, highly regarded in the international community and paid attention to in the U.S. amongst large portions of society.

I am writing to call on you as my representatives to urge the U.S. government to respect the sovereignty of Venezuela and the democratically elected President Nicolas Maduro. I further expect you to condemn the violence perpetrated by extreme elements in the Venezuelan opposition and I hope you will join in eliminating U.S. “democracy promotion” aid to any group calling for or perpetrating violence, actions which have already taken the lives of at least three, injuring many more, and which have involved arson and intimidation to threaten not only citizens but also media outlets and government officials.

Former U.S. President Jimmy Carter has called Venezuela’s electoral system “the best in the world.” President Maduro is widely popular and saw his party grow in the municipal elections last year. Their democratic process ensures that people have the voice, and those who act in violence are not respectful of democratic elections.

I also feel strongly that the National Endowment for Democracy, U.S.AID and other U.S. entities must cease funding parties and candidates in Venezuela, including those that disguise themselves as NGOs promoting democracy and human rights. Secretary of State John Kerry referred to Latin America as the Unites States’ “backyard.” This worldview and the attitude it expresses no longer reflects the points of view of the vast majority of U.S. citizens, and especially not that of Latin Americans. Clearly, in this rapidly changing global environment such an approach only serves to isolate the United States, which damages us not only politically but also economically.

Sign the petition, “Tell Congress: Respect Venezuela!” at http://org2.salsalabs.com/o/7315/p/dia/action/public/?action_KEY=13816, sponsored by the Alliance for Global Justice.

It is the mission of the Alliance for Global Justice to achieve social change and economic justice by helping to build a stronger more unified grassroots movement. Learn more at http://afgj.org/.