Sacramento, Feb. 11 – Hundreds of people from across the state packed two hearing rooms of both public safety committees of the state legislature today to represent the interests of California state prisoners. 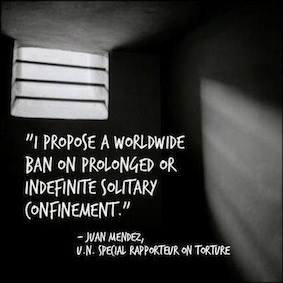 Despite attempts by the California Department of Corrections to insure the public that they are acting with prudence to change people’s gang validations and correct injustices and general inhumane conditions in prison Security Housing Units, testimony from experts and the public continued to unmask the basic torture and impunity of the CDCR’s policies in maintaining prolonged isolation and prisons that fundamentally violate human rights.

While the CDCR claimed that new regulations would change their inhumane system, panelists, the public and the legislators themselves seemed unconvinced. Testimony charged that the CDCR’s changes to its regulations did not end California’s use of indefinite extreme isolation; violations of basic human rights by the state’s solitary confinement units will not change by its new policies; and that the controversial use of debriefing – or informing on other prisoners – were still the primary way a prisoner could get out of indefinite solitary confinement.

Hundreds of people from across the state packed two hearing rooms of both public safety committees of the state legislature today to represent the interests of California state prisoners.

Assembly Public Safety Committee chair Tom Ammiano cut off the CDCR several times during their presentations, saying they were “over answering” simple questions. Ammiano said its regulations “missed the point” and said that CDCR’s so-called changes were counter-intuitive in regulating a system that was predicated on the use of solitary.

According to the Sacramento Bee, “(L)egislators seemed skeptical that the changes would substantially reduce the practice of walling off inmates in the ‘Security Housing Units,’ or SHUs, that exist in four state prisons.

“‘What we’ve set up here is something that’s more complicated than the existing policy, it changes some names,’ said Senate Public Safety Committee chair Loni Hancock, D-Berkeley, but ‘I am not sure it changes the general thrust of what’s happening.’”

“‘What we’ve set up here is something that’s more complicated than the existing policy, it changes some names,’ said Senate Public Safety Committee chair Loni Hancock, D-Berkeley, but ‘I am not sure it changes the general thrust of what’s happening.’”

In a statement released today by prisoners from the Pelican Bay Short Corridor Human Rights Movement, who “have all lived for over 15 years locked 23 hours a day in small windowless cells, without ever being able to hug or touch our families, without ever seeing birds, trees or the outside world, with no programs or chance for parole,” they assert, “California keeps us in these torturous conditions not because of any violence we have committed, but because it believes we are affiliated with a gang, often based on artwork or photos we possess, tattoos we have, literature we read, who we talk to or anonymous informants’ statements that we have no way of challenging.”

The prisoners go on to say that “California is still unwilling to move to a real behavior based system where prisoners are given determinate terms in solitary after due process hearings at which they are found guilty of some serious misconduct, such as assault, murder, rape or drug dealing. Instead, these new policies widen the net of prisoners who can be labeled as gang affiliates and isolated based on that label. These unjust and ineffective policies are very expensive and have already cost our state millions of tax dollars which could be put to better use.”

“‘I think we all agree it is far too easy to get in and too hard to get out, and that the stays in this environment were certainly too long,’ said Martin Hoshino, undersecretary of operations for the California Department of Corrections and Rehabilitation,” the Sacramento Bee reports.

CDCR, according to the Bee, “has also launched a case-by-case review that has led to nearly 600 inmates, of 632 examined, being approved for reintegration into the general population or enrolled in step-down programs. Hoshino said that number ‘speaks for itself.’

“‘It is not something we are planning to do or are talking about doing, it is something that actually happened and is happening as we speak,’ said Hoshino.

“California keeps us in these torturous conditions not because of any violence we have committed, but because it believes we are affiliated with a gang, often based on artwork or photos we possess, tattoos we have, literature we read, who we talk to or anonymous informants’ statements that we have no way of challenging.”

“Those proposals seem largely cosmetic to advocates, who argue officials will still cycle prisoners through solitary units and object to the number of CDCR-labeled ‘security threat groups’ whose members risk the SHU. They argue the step-down process is coercive and endangers inmates, particularly a ‘debriefing’ option. And they say inmates have little opportunity to challenge wrongful assignments to the SHU.

“But their foremost concern remains the possibility of isolation without release.

“‘The default term for validated inmates in California is indefinite,’ said Charles Carbone, an attorney who has represented prisoners, and ‘the underlying conditions in the security housing units and the deprivations – the inability to have direct sunlight, the lack of phone calls – that, too, has not changed.’”

“After the hearing,” the Bee reports, “disbelief still clouded Sylvia Rogokos’ face as she flipped through the art book she said was a piece of evidence used to lock her brother Frank, serving 15 to life for murder, in a solitary cell for 23 years.

“‘(The corrections department) is making these bogus claims and keeping them warehoused there as human real estate,’ Rogokos said. ‘He was just forgotten back there.’”

“Hundreds of prisoners have been sent to the Security Housing Unit (SHU) isolation cells for reasons that have nothing to do with crimes they have committed, and without adequate opportunity to challenge those assignments,” Ammiano said.

“Today, in public hearing, we heard the Department of Corrections and Rehabilitation (CDCR) say it’s changing those practices, but the changes are not enough. I’ve seen the conditions at Pelican Bay State Prison, and agree with international groups like Amnesty International who say these deprivation conditions do not meet accepted human rights standards.”

Amnesty International representative Tessa Murphy spoke out in the legislative hearing and later met with Ammiano, calling on California to reform its practices for the SHU. Academic representatives told the hearing that California’s practices make it an outlier in the United States, while the United States is an outlier internationally, in terms of humane use of prisoner isolation.

The bill would also move to restore good behavior credits for prisoners in SHU for administrative reasons. Those credits allow prisoners to earn shortened terms for complying with prison rules. Those credits were inexplicably eliminated by a budget bill in an earlier session.

“These prisoners should have the same good behavior incentives given to others,” Ammiano said. “It’s not just a question of fairness. This is a budget savings and a way to ease crowding while encouraging rehabilitation of those who will be rejoining society when their terms are up.”

“The proposals in this bill are modest,” Ammiano added. “I hope that the Legislature finds its political will and keeps this reform progress going.”

“This could mark a very profound shift in California’s shameful and torturous use of solitary confinement,” said Azadeh Zohrabi of the Prisoner Hunger Strike Solidarity Coalition. “We are glad to see that Assemblymember Ammiano seems to be understanding that we must aim at this most egregious use of violence against imprisoned people as a starting point to the serious changes that need to happen within California’s prisons.

“Moving forward, we would like to see these reforms be applied retroactively to the people who have been living under these horrendous conditions for decades, and we’d like to work to get as many of our loved ones out of solitary, to keep them out, and to fight against anyone ever having to be subjected to this torture to begin with.”

Prisoner Hunger Strike Solidarity (PHSS) is a coalition based in the Bay Area made up of grassroots organizations and community members committed to amplifying the voices of and supporting the prisoners at Pelican Bay and other California prisons as they strive to win their hunger strike demands. Email prisonerhungerstrikesolidarity@gmail.com and visit http://prisonerhungerstrikesolidarity.wordpress.com/. Bay View staff contributed to this report.

Watch the official video of the Feb. 11 hearing from The California Channel. The duration is three hours and 32 minutes.

Hundreds of California prisoners in isolation should be covered by class action, attorneys argue in court