Rev. Jesse Jackson led a delegation to the Hewlett Packard annual shareholder meeting on March 19, calling attention to the lack of minority inclusion in Silicon Valley. He emphasized the virtual absence of African Americans in corporate boardrooms, corporate suites, financial transactions, advertising and professional services. The following day, he met with community leaders in the East Palo Alto city offices. 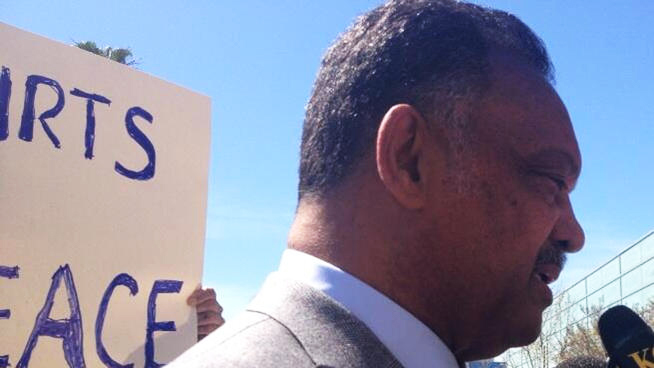 In his remarks to the HP shareholders, Rev. Jackson said: “Silicon Valley and the tech industry has demonstrated that it can solve the most challenging complex problems in the world. Inclusion is a complex problem – if we put our collective minds to it, we can solve it, too. There’s nothing we can’t do, together.

“We won’t know how good Silicon Valley can be until everyone can participate. All we ask is that everyone plays by one set of rules, and that there is an even playing field for all.

“The ‘we can’t find them’ syndrome is a thing of the past. Who is looking? And where are ‘they’ looking? We can find them if we look in the right places. There is a wealth of untapped talent.

“Blacks are biggest per capital users of social media and the internet – we use HP computers and printers; we use iPhones and androids. We are a huge part of your customer base. It’s time the boards of directors and C-suites – the businesses you do business with – reflect your customer base.”

“We won’t know how good Silicon Valley can be until everyone can participate. All we ask is that everyone plays by one set of rules, and that there is an even playing field for all.”

Writing to Apple, Twitter, Facebook, Hewlett Packard, Google and other iconic Silicon Valley technology companies prior to the meeting, Rev. Jackson had said, “Technology is supposed to be about inclusion but, sadly, patterns of exclusion remain the order of the day.

“When it comes to African Americans on board – ZERO. C-suites, ZERO. Minority firms in IPOs and financial transactions, advertising and professional services – ZERO. These ZEROES are contrary to the enlightened values exposed by the industry. Rainbow PUSH is seeking meetings with tech leaders to address these ZEROES head on.”

ZERO Blacks on boards and in the C-suites

Tech powerhouses including Apple, EBay, Google, and new media companies like Twitter and Facebook have ZERO Blacks on their board of directors. Black Enterprise magazine reported that 75 of the top 250 S&P 500 public companies do not have an African American on their board of directors. Whites made up 86.7 percent of total board seats, and women and minorities lost ground in America’s corporate boardrooms between 2004 and 2010, according to the Alliance for Board Diversity, reporting in August 2013.

This same pattern exists in the C-suites. Facebook, Twitter, EBay, HP, Apple, and far too many other Silicon Valley and technology firms have ZERO African Americans on their senior executive leadership teams. There are just five Black CEOs – or 1 percent – heading Fortune 500 companies. Latinos fare slightly better with eight CEOs, 1.6 percent. And there are only 22 women at the helm out of all the Fortune 500 CEOs, according to DiversityInc.com/top50.

The “all-white” – and mostly male – syndrome should become a thing of the past, and the HPs, Facebook and other captains of industry must take the lead in putting it to rest. Digital inclusion leads to greater opportunity, and that’s added value for Silicon Valley.

The Rainbow PUSH report, “Minority Inclusion in Debt Capital Markets: A Ranking of Corporate Issuers,” revealed that iconic technology firms ranked in the survey – Google, Apple, HP and Oracle – all ranked at the very bottom, Tier 5.

Tech companies target Black and minority consumers; 24 million are internet users and 76 percent visit social media sites, according to Neilson. African Americans have continued to outpace the total population with smartphone ownership. Google Search is the No. 1 search engine among African Americans. Yet, of the $75 billion spent on television, magazine, internet and radio advertising, only $2.24 billion of it was spent with media focused on Black audiences. Few if any tech companies utilize African American advertising or marketing agencies.

Rainbow PUSH is seeking meetings with tech leaders to identify strategies and solutions to expand the participation of African-American and people of color and to become partners based on reciprocity and mutual benefit.

Rev. Jackson told HP, “At its best, technology can be a tremendously positive change agent for the world; at its worst, it can hold on to old patterns that exclude people of color and women from opportunity and advancement. Silicon Valley and the tech industry must transform itself to mirror the America it depends upon for talent and customers.”

Rainbow PUSH is seeking meetings with tech leaders to identify strategies and solutions to expand the participation of African-American and people of color and to become partners based on reciprocity and mutual benefit.

No inclusion in Silicon Valley and the technology industry: Some facts and figures

The following information is derived from the Rainbow PUSH survey, published February 2014, on minority participation in capital debt markets between 2010 and September 2013.

IBM used minority firms in 17 of its 20 debt offerings – 10 were used just once, five twice and five three times or more.

Four of EBay’s six debt offerings included a minority firm, but in each case just one.

Google used just one minority firm in all three of its debt offerings.

HP did not include any minority firms in 20 of its debt offerings.

Apple did not include any minority firms in six of its debt offerings, including its latest $17 billion debt offering.

Oracle did not include any minority firms in its nine debt offerings.

Apple, Cisco, EBay, Facebook, Google, HP, Intel and Twitter and far too many technology companies have ZERO Blacks on their board of directors, and in their executive corporate suites.

BET’s report indicates that there are 177 Blacks on the boards of directors of America’s 250 largest public companies. That report found 75 (30 percent) of these corporations with no Black directors.

“The world at the top of the corporate hierarchy does not yet look anything like America. Two-thirds of our population and 57 percent of the working population is female or minorities or both.”

The Glass Ceiling report observes, “The world at the top of the corporate hierarchy does not yet look anything like America. Two-thirds of our population and 57 percent of the working population is female or minorities or both.” The commission projects that this year, people of color and women will make up 62 percent of the workforce.

Rainbow PUSH Coalition is a multi-racial, multi-issue, progressive, international organization that was formed in December 1996 by the Rev. Jesse L. Jackson Sr. through merging two organizations he founded, Operation PUSH (People United to Serve Humanity), established in 1971, and the Rainbow Coalition, established in 1984. With headquarters in Chicago and offices in Washington, D.C., Atlanta, Detroit, Houston, Los Angeles, New York and Oakland, the organization works to make the American Dream a reality for all citizens while advocating for peace and justice around the world.

RPC is dedicated to improving the lives of all people by serving as a voice for the voiceless. Its mission is to protect, defend and gain civil rights by leveling the economic and educational playing fields while promoting peace and justice around the world. Learn more at rainbowpush.org, and contact Rainbow PUSH and Rev. Jackson on Facebook, Instagram and on Twitter @RPCoalition or @RevJJackson.

For more information on Rainbow PUSH and the new Digital Inclusion initiative, contact Pastor Joseph Bryant at 415-859-1061 or pastorbryant@comcast.net or Butch Wing at 510-701-8955 or bwing@rainbowpush.org.