On Wednesday, March 12, as I hiked west along Avenue M on the Berkeley side of Treasure Island, the particularly interesting odor filling my nostrils reminded me that, in the end, we are all human. This not unpleasant “eau de toilette” announced I was approaching the wastewater treatment plant at the northwestern border of Site 6 facing the Golden Gate. Site 6’s opposite boundary lies southeast of Avenue E toward San Francisco and the Bay Bridge. 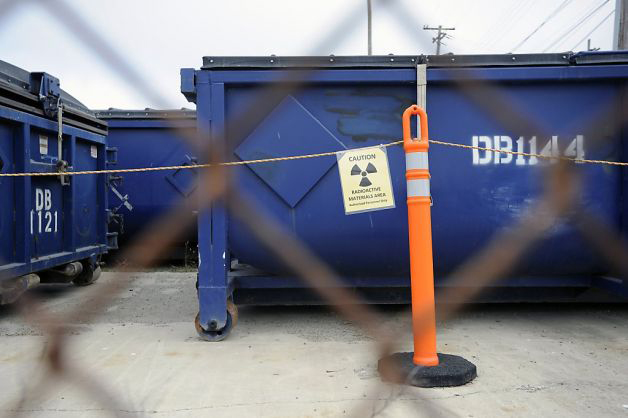 Behind a chain link fence on Site 6’s northern border across Avenue M from the island’s Wastewater Treatment plant, the Navy stores, moves out and continually replaces a trail of thousands of large boxcar shaped containers full of radiologically toxic materials to be shipped off-island. According to a May 17, 2010, memo by senior Health Department physicist Larry Morgan, documented in a 2012 Bay Citizen article by Matt Smith, “There have been several (high-radiation) shipments and about a thousand intermodal (containers) of radium waste shipped from Treasure Island.” In the two years since 2012, many more containers have been shipped.

On Monday, April 7, 2014, rows of “newbies” ranged around the fence with “regulars.” As of May 2013, these rectangular caskets were reported being shipped off-island to a western toxic dumpsite in Clive, Utah.

Residents express concern that, if the wastewater treatment plant breaches in heavy rains or with earthquake damage, the receptacles’ radioactive contents might escape and wash over the island and into the Bay.

It is no surprise, therefore, that Site 6 is also historically significant for a 1950s fire training school where toxic oil-based substances firefighting trainees employed to snuff out blazes were casually dumped on the ground. Sixty years later, Navy remediators are still cleaning dioxin-producing petroleum and naphthalene from Site 6.

An attractive 16-page glossy pamphlet filled with colorful charts, assorted technobabble and acronyms for various actions, functions, chemical contaminants and environmental conditions was given to the public, who one suspects might have difficulty comprehending the text. To successfully respond to the Navy’s solicitations for written public comment, “no later than March 31, 2014,” it was important that attendees understand Site 6 remediation. One woman requested the committee make the information less scientifically lofty and more user-friendly.

I observed to Keith Forman that the text seemed to claim final authority with no footnotes or references provided that allowed one to check facts and figures for oneself. The Water Board’s Myriam Zech explained this material was documented on a website – accessible, but with difficulty.

“During fire training exercises, petroleum, magnesium and wood-fueled fires were set in various mock-ups at the former fire training school and then extinguished using a mixture of water and biodegradable emulsifiers.” These extinguishing agents produced “contaminants in the soil” including “dioxins and furans, total petroleum hydrocarbons (TPH), volatile organic compounds (VOC), semi-volatile organic compounds (SVOC), polychlorinated biphenyls (PCB), methylchlorophenoxypropionic acid (MCPP) … arsenic and manganese.” All of these substances are carcinogenic.

In light of the SFFD’s program offering training in “two propane-fueled live fire rooms,” it seemed fitting that, during the March 12, 2014, RAP meeting, resident Kathryn Lundgren asked Lead Remedial Project Managers Bryce Bartelma and Dave Clark whether “our current firehouse that is now the current fire training … (will) be made a repeat of Site 6? Are they using the same chemicals as they did in the past?”

Keith Foreman interjected with reassurances. “We’re talking about a Navy firefighting training school that did things completely differently than they would today.”

Vintner Patrick Bowen verified this, proudly describing his firefighting school neighbor east down Avenue M from the Fat Grape Winery. “Those big huge metal plumes” on the facility, he said, “those are afterburners and cleansers. So they can actually train in anything. They can burn chemicals and gasolines and oils and rugs and fabrics and anything, and nothing goes into the air because it’s all filtered out. Heaven forbid it goes into the air! Berkeley’s on the other side of the Bay,” he chuckled. 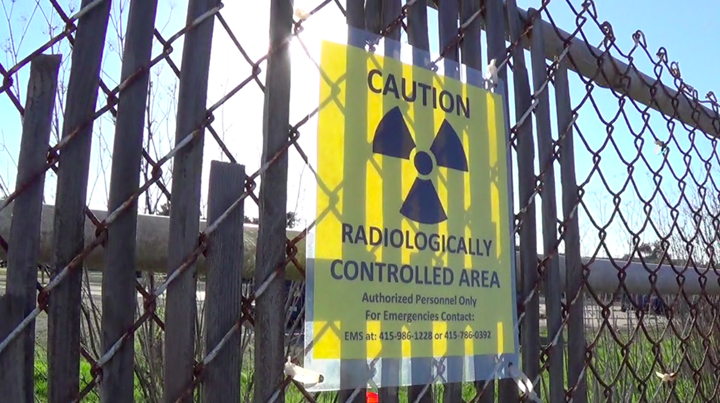 Considering the mold problem that forced firefighters out of the old fire station, the radionuclides and chemicals left in Site 6 soil, together with lack of attention to island infrastructure, this concern bears ongoing scrutiny.

Ms. Lundgren continued directing questions to Mr. Bartelma, pointing out the chart in the Navy’s brochure listing dioxin as one of the contaminants left from the old firefighting school on Site 6.

“Bryce, it says in here that those things (Table 2 dioxins etc.) exist in the site … so I want to make sure that I’m clear on whether it’s actually infiltrating the soil … – or the groundwater – though it says it doesn’t.”

Addressing Bryce, Kathryn pointed out that Table 2 of the Remedial Action Plan Pamphlet listed dioxin as being in soil but not groundwater. She asked whether that is because “you’ve actually tested the groundwater and not found any evidence of it or acceptable level of it? Because groundwater and soil must interact in some way if there’s a raising and lowering of the groundwater levels. There must be some residue.”

“Going back to the site models, the dioxins in the shallowest soil are because that’s where the burning took place (burning petroleum produces dioxins). So, if they (the 1950s firefighter trainees) were burning material, we would expect to find it in that soot-like material right at that ground surface.”

Bryce glanced left to his co-lead remedial project manager Dave Clark for a response and continued. “As far as migrating downward to the groundwater, it’s possible. I’m just not certain that their remedial investigation looked at that.”

“or no known concentrations exceeded the screening level. So we supplemented the existing data set with new data. And so that’s why you don’t have these groundwater issues, because we have real data, or recent data, not making them exceeding the screening levels.” (This dialogue can be followed in full in the accompanying video clip.)

He explained their testing showed that dioxins, arsenic, petroleum hydrocarbons and volatile organic compounds were apparently far enough “below the screening level” that they were confident in simply replacing old data with new, updated data. The end result is that we, the public, are prevented from scrutinizing old data and checking the facts for ourselves.

The specter of RAD

At the March 12 RAB (Restoration Advisory Board) meeting, Kathryn Lundgren brought before the committee the specter of radiation – “RAD” in technobabble.

On Feb. 12, 2014, Kathryn and I had paid an earlier visit to Site 6’s southern border. The wastewater treatment plant was visible. The presence of radiation was the topic. A yellow business obscured the radiation storage yard to the northeast.

An automobile with Rapid Radon Remediation lettered on its door was parked in front.

“You think the Ace Glass Co. is remediating their radon?” I asked.

It interested me that the building abutted the radiation storage area on the other side.

I asked, “Does that tell you that the people in this building know, because of the storage area, there is probably radon in their building, or around their building, and they’re trying to remediate it?”

“Right” said Kathryn. “Has anybody (on the RAP committee) brought (radon) up?” she asked sardonically.

“Has anybody suggested that our homes (be tested for radon)? 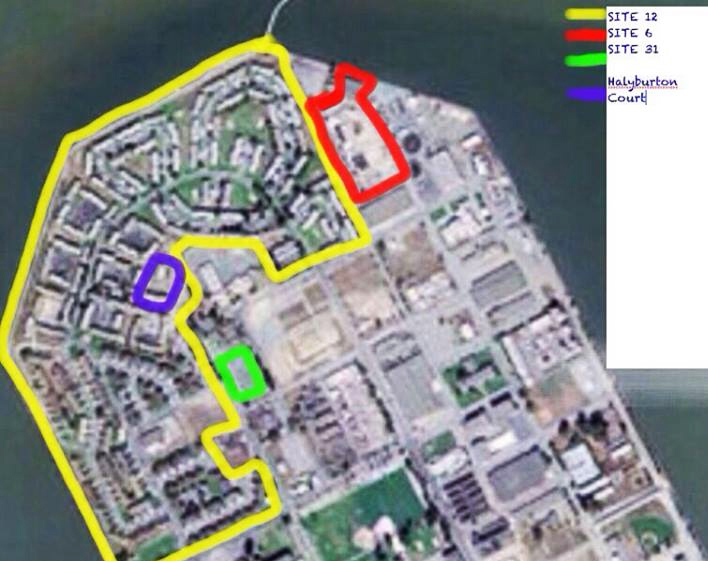 I asked if anybody had.

“We brought it up,” insisted Kathryn.

Have they discussed it?

During the March 12 meeting, Kathryn queried Keith Forman: “So we’re not talking about RAD at all in this area? Even though that’s the location of the storage area currently? So it’s not an issue at this point?”

Keith Forman answered, “No, when you have a storage area for RAD – when you close out that storage area, you do a screening. But that’s not due to a release – a RAD release or anything – so it’s not really part of CERCLA.”

CERCLA is the acronym for a federal Law entitled Comprehensive Environmental Response, Compensation, and Liability Act, which mandates remediation.

“Yes,” answered Mr. Forman, “just to make sure that you did good housekeeping when you picked up your storage area.”

Unrecognized was our deep concern about possible poisonous leakage from the rectangular radiation storage boxes behind the chain link fence with its radiation warning signs. Also, we knew that businesses at the lower end of Site 6 were remediating their facilities for Radon.

Retorted Kathryn, “Let’s get (radon) out quick for people who pay a lot of money to be there.

“Stuff like that makes me really furious. Then I lose my sense of decorum.”

People in this building have the money, I reflected. The poor people who were brought out here – the 2,600 of them – are middle and lower income people who don’t have the money to pay Rapid Radon Remediation.

“Yes,” frowned Kathryn. “But the City does, and the City is our landlord, so why isn’t the City doing this?” 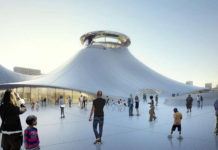 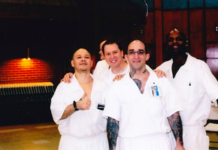